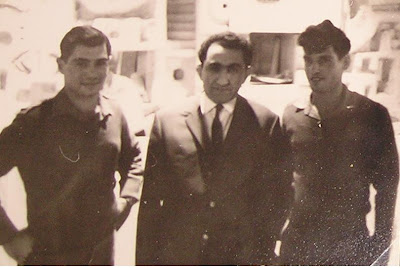 Just look how proud they are, having captured their spy, and how despairing and depressed the then-world champion, Tigran Petrosian, looks.

OK, not really. Yes, these are Israeli soldiers flanking Petrosian in the picture, but they are not arresting him. They are just young chess players, on leave from their army service, visiting the 1964 chess Olympiad in Israel. That they are still in uniform means that they didn't bother going home to change into civilian clothes--they came right from their army base to the Olympiad. The picture is from the personal collection of Itzhak Bar-Ziv, who is one of the soldiers.

So why does Petrosian look as if he's really being arrested? Don't look at me... I'm just the blogger...
פורסם על ידי Avital Pilpel ב- 10:32 PM No comments: 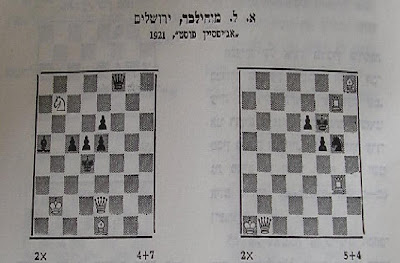 These are the first two problems ever composed by a Palestinian composer. These two orthodox mate-in-2 problems were composed by Aryeh Leob Mohilever, a well-known chess player and activist in Jerusalem, and originally published in the Egyptian Post (Cairo) in 1921. (Source: Eliyahu Fascher's book, The Israeli Problemist.) The solutions appear below; highlight the last, 'invisible ink' paragraph.

At the time--the early 20s--Mohilever was the president of the Emanuel Lasker chess club in Jerusalem, and editor of its magazine. He was either very proud of these two problems or desperate for material to fill the magazine's "problems" section: he published both of them twice in it, despite the fact that the magazine itself only lasted four issues, in 1923/1924.

Both problems are very poor, and have no theme at all. But, by the 1950s, Israel was one of the top 10 nations in the world in chess composition. 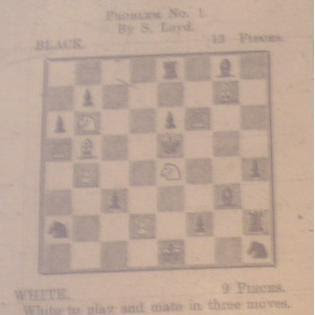 Now that we have insulted the memory of the readers of The Palestine News, it is time to do the same to the chess editor. Above is "problem no. 1" in The Palestine News. It is the first chess problem ever published in Palestine. If it looks familiar, it should: it is a mate in three by Sam Loyd, one of the most famous ever composed. Unfortunately, there is a mistake in the diagram: the White King hould be on f1, not e1, where it is put in check by the Black Pawn on f2.

A correction was printed in later issue (with Loyd's name misspelled "Lloyd"), together with another problem by him. Unfortunately, this second problem was misprinted as well. That mistake, too, was promptly corrected in a third issue. Unfortunately, that issue presented a game played in Petrograd (i.e., St. Petersburg) 1914 between Emanuel Lasker, the world champion, and one "Casablanca"--no first initial(s) given.

Edward Winter would have had a field day.
פורסם על ידי Avital Pilpel ב- 11:14 AM No comments: