In the previous post, we mentioned 'The Toys' (הצעצועים - Ha'Tza'a'tzu'im) as an article mentioned in Marmorosh's chess column. Thanks to the Israeli National Library's online archive, the source was found. It is by Yehoshua Reichenzahn (phonetic translation from the Yiddish  יהושע רייצעםזאהן) and is found in the yearbook Knesset Israel, 2nd year (1887), columns 47-64 (each page has two columns) of the 'Useful Section' (Ha'Helek Ha'Shimushi, החלק השימושי) -- the sixth and last part of the yearbook, following the fifth part, the obituaries (p. 1340 on the online scanned version in the link).

The article starts with a very loose translation of chess terms from other languages into Hebrew, relying often on the sound of the word and not its meaning. While some translations make sense (e.g., 'horse' for the knight), he translates the German Bauer (lit. "farmer", i.e., the pawn) as Bor (בור) -- citing the source, the Avoth tractate, where the word (as in modern Hebrew) means 'a hole in the ground', esp. one for keeping water. He also translates Rook as Rach from another Talmudic tractate (Bava Batra) where the word, again as in modern Hebrew, means 'soft' or 'young'.

The main part of the article is a poem, Tachsisey Milchama (תכסיסי מלחמה, 'Strategy') of a battle between the Indian and Persian kings, who are doing battle against each other supported by a mercenary battalion of 'Germans' (the White pieces) or 'Africans' (the Black pieces), respectively. After each move by either side there is a four-line quatrain describing the move, its purpose, what it threatens, etc., ending with White checkmating the Persian king on, in modern notation, the 25th move (the 45th half-move). In this, the poem reminds one of Jacob Eichenbaum's Ha'Krav (הקרב, 'The Battle') (Odessa, 1839 -- see Keats' Chess in Jewish History and Hebrew Literature, Magnes Press, Jerusalem, 1995, pp. 232ff).

Apart from this, the article has chess problems ('The German [White] wins in one move', for example) and another game, this time between Zechariah, a Jewish merchant, and 'The Master', a gentile nobleman. who meet in a tavern. The game is given, as well as the conversation between the two. Zechariah, of course, wins, but The Master declares that he cheated and has his servants beat him. In a combination of remorse and shame, The Master ambushes Zechariah in the field as he leaves town, kills him, then shoots himself!

The article seems very obscure. It is not mentioned in Keats, nor have I found it anywhere else except for its mention in the introduction before the start of Marmorosh's first chess column (see previous post). As this introduction refers to Marmorosh in the third person as the 'player who will edit the column', it was probably not written by Marmorosh himself. One wonders who was the scholar who wrote the introduction, mentioning this obscure source as well as others.
פורסם על ידי Avital Pilpel ב- 6:16 AM No comments: 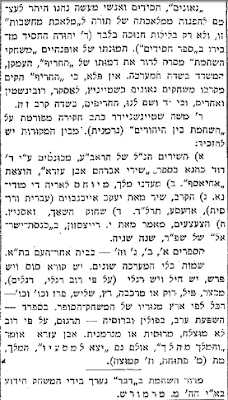 Moshe Marmorosh's very first column, in Davar, Nov. 7th 1930, starts with a general introduction by the editors. As so often in Israeli (or Palestinian) press, it starts with the famous 'Song of Chess' poem, and adds a brief history of the game among the Jews.

This time the introduction, probably written by the editor and not by Marmorosh himself, is rather good, with a detailed note both of important chess-related items written by Jews, both famous (like 'Song of chess') and rather obscure ones, like the article 'The Toys', article by Yehoshua Reichensahn (ph. translation -- the original Yiddish, see the next post, is רייצעםזאהן), in "SF"R's [Saul Pinchas Rabbinowicz - link in German, last name also spelled Rabinowitz] Knesst Israel", a Zionist yearbook edited by Rabbinowicz in 1885-1888 in Warsaw. The unsigned introduction was probably (see also the next post in the blog) not written by Marmorosh himself, as it refers to him in the third person.

We have already mentioned in this blog the first game published in it -- the famous 1907 Rubinstein win vs. Rotlewi. Here is the first problem, by L. Holzer: 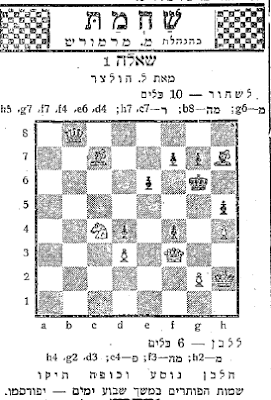 'Chess' is spelled שחמת -- this was before the common spelling today, שחמט, became the standard ca. 1940. It is also interesting to note that, as usual for Hebrew chess works at the time, the pieces were given Hebrew names and initials (e.g. King = מלך [Melech] = מ, the initial letter, Hebrew being written from right to left), but the board's files used Latin letters.
פורסם על ידי Avital Pilpel ב- 3:28 AM No comments: 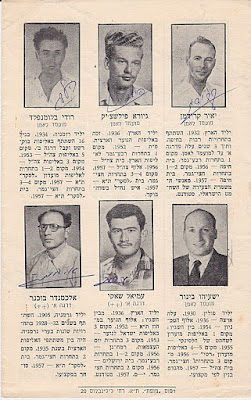 The above is the program of the Israeli 1957 chess championship. The seller wants $350 for it, which seems a rather high price. But at least it does have the signature of most (not all) of the participants, including, e.g., on the right page of the last image, Czerniak (top right), Porat (top left), Itzchak Aloni (bottom right), and Dyner (bottom left).