The Joy of Books

Sometimes, I post things on this blog that are of a general chess nature, not having anything in particular to do with Jews and/or Israel/Palestine, though they do have to do with chess, and usually, with chess history. This post is such a case.

Today, everybody just "knows" nobody needs chess books any more, and all that matters are databases -- especially so as to keep up-to-date with the latest opening novelties. But let us consider what Amos Burn had to offer us -- way back in 1901.

Burn was, in his peak (ca. 1890) almost as strong, based on his international tournament record, as Steinitz was at the time, while remaining an amateur. He was also British Amateur Champion, won many strong national tournaments, etc. He was also a longtime editor of chess columns. In the Liverpool Weekly Mercury, 17 Aug. 1901, he offered a correspondence game between the Liverpool Chess Club (where he was one of the consultants) and the Edinburgh Chess Club.

The game reached the following position:


Burn notes that, after the last move, 53. Bf4!, the Liverpool CC announced mate in 45. The Edinburgh CC, in reply, accepted their analysis and resigned the game!

Why? Burn explains in his long column (I am paraphrasing):


Now, adds Burn, this queen's ending is (due to the extra advanced pawn) won for White. But it isn't simple! He notes: 'It would have been an almost endless task to... arrive at the solution by mere plodding analysis'. Instead he offers the following strategic analysis (I shortened it) of various winning plans.
So, we have, in one column:
Oh, and not to mention, the complete game itself.

But amateurs think that they will get more out of chess by checking their constantly-updated database for opening novelties they will never play and won't know how to exploit if they did play.

They must be joking.

Needless to say the actual Arab version of chess -- shatranj -- would not have queens. Instead, it would have a vazir, literally "counselor", roughly equivalent to "prime minister", or the shah's chief adviser. It certainly won't have any bishops!  What we really have here are simply Staunton-design cheap wooden sets.
פורסם על ידי Avital Pilpel ב- 12:59 AM No comments:

From the "Chess for Yuppies" File

Chess is seen, sometimes, as not so much a game but a status symbol -- something that intelligent and/or successful and/or rich people engage in to show their superior mind. Many people own a chess set without knowing how to play -- simply as a mark of culture.

The above (found in one of those god-awful "gifts for men" store, with overpriced made-in-China "exclusive" junk) is the result. Oy.
פורסם על ידי Avital Pilpel ב- 12:48 AM No comments:

In spring 1936, Jacques Mieses visited Palestine. He gave a few exhibitions. His results were:

Jerusalem, May 5, 1936: 2 Consultation games (=2). 1st board: Mohilever, M. Weitz, spelling corrected 10/2/2014; presumably the same Weitz who was the chess patron of the club -- see here for more details. Burnstein, and Not. 2nd board: Kelter, Y. Weitz, and Lukowitz (all spellings except Mohilever's phonetic). At the Menorah Club.

Jerusalem, May 7, 1936: At the Menorah Club. Blindfold simul against five opponents (+3 =2). Drew against Torczyner (a famous linguistics professor, Shaul Hon's mentor) and Silberberg. 'His performance amazed all the spectators'.

Below is the second consultation game (vs. Kelter, Y. Witz, and Lukowitz). Mieses is Black. Annotations by Moshe Marmorosh.

An unusual move in this opening and the White consultants manage to refute it. 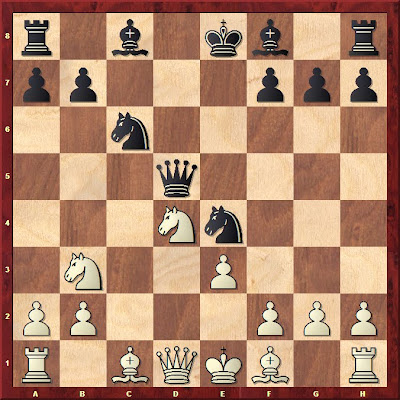 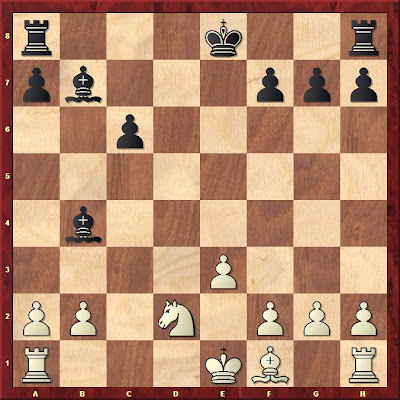 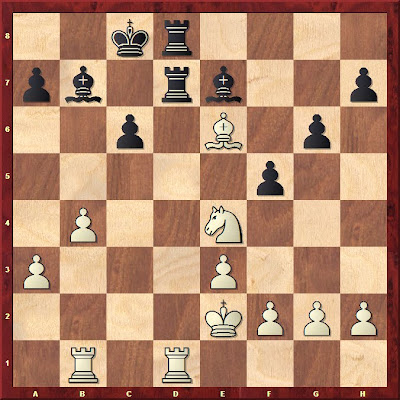 
Threatening to win the Bishop after 30. fxe4, but the old master finds a way out. 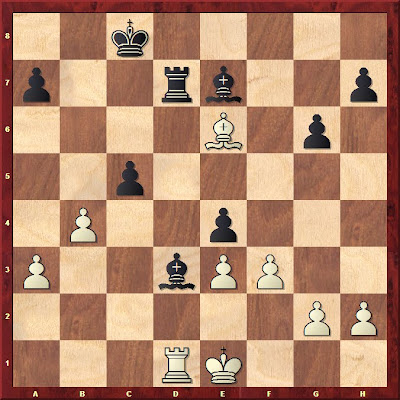 The only saving move!


Sources: Davar's chess column (ed. Moshe Marmorosh), 7.5.36 and 14.5.36. Apparently there were no reports of Mieses' results at Haifa, or the games were canceled.
פורסם על ידי Avital Pilpel ב- 8:01 AM No comments:

It isn't all Brilliancies, you Know

In the 1976 Haifa Olympiad there were many very interesting games between strong players. But, as Shlomo Kandelshein (author) and Yedael Stepak (analyst) note in their very good book, The Haifa 1976 Chess Olympiad, the level of the "rabbits", the players from countries with no chess tradition, left much to be desired.

They give (p. 34) the following game, played in the second round between Brain G. Campbell (British Virgin Islands) and Maurice Kennefick (Ireland). Stepak's annotations are justifiably derisory.

About the level of the countries which were ranked near the bottom in the Olympaid we can learn from the following amusing game. Does the first player deserve an Israeli 5th rank [American "D" level player- A.P.]? 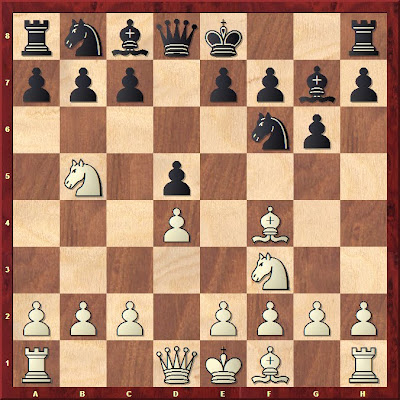 Pretty good relative to White's level, but even this is too late. 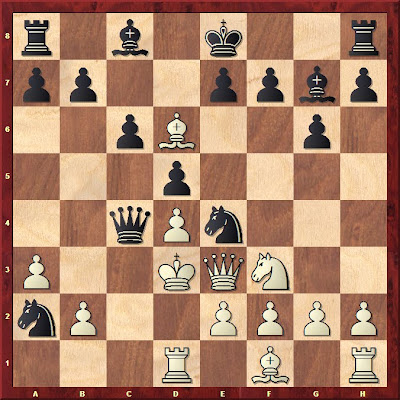 Today, due to computers and improved training, such games -- even among weak contestants and teams -- are rarely seen in the Olympiad.
פורסם על ידי Avital Pilpel ב- 12:53 PM No comments:


David Friedmann (1893-1980) was a Jewish artist and Holocaust survivor. He was born in Maehrisch Ostrau in the Austria-Hungary Empire (The town is known today as Ostrava, in the Czech Republic.)

In 1911, he moved to Berlin to study art. During WWI, he served with distinction as a battle artist in the Austro-Hungarian Army. He returned to Berlin and resumed painting late impressionist landscapes, still lifes, and nudes, and exhibiting at the Berliner Secession and numerous galleries through Germany and Czechoslovakia.

In 1924, his acclaim as a portraitist led to an additional career as a freelance press artist for various Berlin newspapers and magazines. He sketched many luminaries from all walks of life, from scientists such as Albert Einstein to barn-storming pilots such as the WWI ace (and, ironically, later Luftwaffe high-ranking officer) Ernst Udet (1). He was most at home in the artistic world, sketching numerous portraits of opera singers, musicians, actors, and chess players (3). He also portrayed politicians, sports legends, and industrialists.


He learned that an International Chess Master Tourney would take place from July 1-18, 1923, in his home town and place of birth. He met Dr. Emanuel Lasker, the former would chess champion. He explained about his specialty of producing lithographs and intrigued him with the idea of portraying the players in the tournament. (My father was a master in lithographs and copper etchings, having studied this technique with Hermann Struck in 1913 in Berlin). (1)

The result was 50 numbered portfolios composed of 14 lithograph portraits (one for each player): Das Schachmeister Turnier in Maehrisch Ostrau, Juli 1923. Remarkably, after having been lost a second time,  portfolio no. 4 surfaced again in the Ostrava Museum. At some point the artist omitted Pokorny and Hromadka, and changed the title to Köpfe berühmter Schachmeister. This portfolio of 12 to 14 lithograph portraits is composed of most of the players of the 1923 tournament and now included Ossip Bernstein and/or Richard Teichmann (images from the portfolio linked to above, (c) 1999 Miriam Friedman Morris, hosted by the Koninklijke Bibliotheek - national library of the Netherlands). Emanuel Lasker himself owned portfolio no. 27; the Bibliotheek's portfolio is no. 28. (2)

After the Nazis' rise to power, his prewar career ended. In 1938, he fled with his young family to Prague, only to be deported in 1941 to the Lodz ghetto, and then in 1944 to Auschwitz and other camps. The Gestapo looted his oeuvre in 1941 in Berlin and again in Prague under the auspices of the Deutsches Reich. All through his incarceration, he continuing to draw and paint (scroll down on the web page linked to 1941ff.) (3)

It takes only a short glance at David Friedmann's art, as can be seen in the links provided as well as the illustration in the articles quoted, that he was a major artist, a great talent. To this day, Ms. Friedman Morris is looking for art by her father which was lost in the war. A detailed list is here. Another is here (in German and English).

Ms. Friedman Morris told me that while still in Berlin, her father gave or sold his art to Jewish friends or clients fleeing the Nazi regime to Eretz Israel. Due to his interest in chess, it is possible that some of his portraits of chess masters, and, who knows, perhaps other, unknown chess art, had been saved by chess players now in Israel. In fact, his art could be found anywhere in the world. If you, dear reader, know of such art, Ms. Friedman Morris and I would be very glad to hear about it.

Note in particular that David Friedmann varied his signature, signing sometimes Dav. Friedmann (as above), sometimes D. Friedmann, and sometimes just Friedmann (1). Scroll below in this link of his lost art for examples of his varied signature.

David Friedmann also lived and painted in Israel (1949-1954) and the United States, where he became an American citizen in 1960. He changed the spelling of his surname to Friedman.