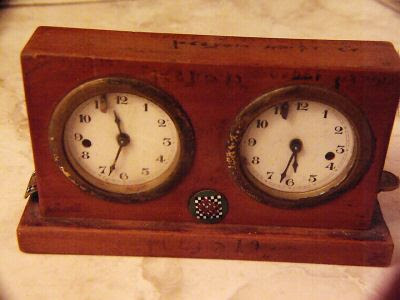 An Israel-made chess clock, ca. 1950. Photo Credit: Avital Pilpel, from an e-bay advertisement.
From Yosef Porat, Oman ha'Sachmat ["Yosef Porat, the Chess Master"] by Eliyahu Fasher and Yosef Porat, p. 29:
'A year later [in 1936-A.P.] the first championship of Palestine took place... it is true that, as the editor of La'Merchav's Chess column noted in 1956, he tried to get details about the tournament that took place in "Sheleg ha'Levanon" coffee house in 1929. But despite the fact that some of the contestants were still alive, neither the crosstable nor a single game score were found. Moves weren't written down and no chess clocks were used (they used hand watches)'.
Presumably, 'pressing the clock' meant pulling out the crown of one's watch and pushing in the opponent's. Not convenient in a time scramble! As no moves were recorded, the games were probably played with a "sudden death" time control (game in so many minutes), as there was no way to determine when the time control was reached.
My research found no record of this tournament anywhere except for Fasher's book (and La'Merchav original article). This is because, unfortunately, it took place in a vacuum: after the folding of the (short-lived) Emanuel Lasker chess club magazine in the mid-1920s, and before any chess columns began to appear in the early 1930s.
Can any reader enlighten us about it?
פורסם על ידי Avital Pilpel ב- 12:03 PM