What did Keniazer do for a Living? 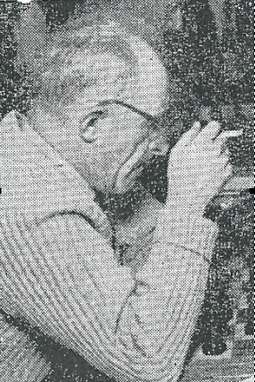 Kniazer at play. Source: see link below
We have often noted in this blog the Palestinian / Israeli player Kniazer. We note two points: first, our spelling was off, and Keniazer is the correct spelling. We will be changing the spelling in the blog to match over time. Second, it seems little of his personal life is known. His exact dates were not easy to find (the link has them and the source of the picture above). Our colleague, Shahar Gindi, asked us recently - what did he do for a living? Certainly, he was not a professional player, but it is not clear from any biographical source what his profession was. It is not mentioned, in particular, in his obituary (of which we summarized here), nor in his book with Raafi Persitz, for example. Can any reader solve this mystery?
פורסם על ידי Avital Pilpel ב- 10:23 AM No comments: 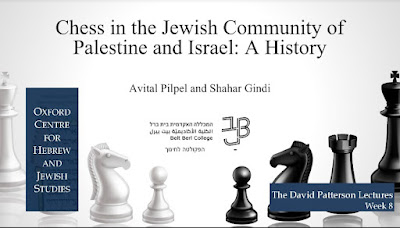 Above: the lecture
At long last, Shahar Gindi and I are giving our lecture in the Oxford Centre for Hebrew and Jewish Studies about the research we have done for the book in progress. the lecture is at 17:00 in the Clarendon Institute, Oxford University.
פורסם על ידי Avital Pilpel ב- 10:10 AM No comments:

Fine as an Historian 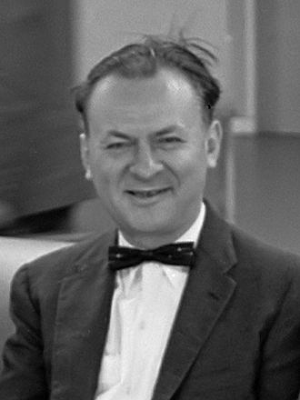 (Above: Fine in 1961, credit: Wikipedia)
Reuben Fine is well known, or notorious, for inaccuracy in his published chess history. For details, see for instance, Edward Winter's essay on Fine's writing. But what about other writings? Is Fine more accurate in his psychological work?
Possibly not. Fine's movement from chess to psychology was described by Gilbert Cant as a loss for chess and a draw at best for psychology, as noted for example by Winter here. Certainly, we concur with Winter that Fine's The Psychology of the Chess Player is "inexpressibly awful."
By chance, we happen to be reading Freud Without Hindsight: Reviews of his Work (1893-1939) by Norman Kiell (Madison, CT: International Universities Press, 1988). Fine's History of Psychoanalysis is occasionally mentioned. The impression one gets is that the book is superficial. It either simply takes Freud's word (in, e.g., letters for Fleiss) as accurate without further verification, or relies on previously published secondary accounts which Kiell says, he "perpetuated."
פורסם על ידי Avital Pilpel ב- 10:01 AM No comments:

The previous post does not, however, mean that the "Reti" club ignored the young players. Here is one example: a frequent correspondent notes that Ha'tzophe reports (June 19, 1959, p. 6) on "a triple party" in the "Reti" club, whose secretary at the time was Eliezer Pe'er.
These were the sending of the Israeli Students Organization's team to a Budapest tournament (the 6th World Student Team Chess championship); the prize ceremony of the 1959 Tel Aviv championship (won by Persitz), and presenting the "Reti cup" to the winner of the "Reti" club championship, Meir Rauch.
But while "Reti" knew well to honor young players and their achievement in the Reti club, the actual players in the "Reti" club tended to be old-timers, like Rauch. This was not, of course, 100% so: some young players played for the club at the time, in particular Raafi Persitz, as can be seen, e.g., in Ma'ariv's report of league play on 10 June 1960, p. 12. (This too was pointed out to us by a frequent correspondent.)
In that report, it is noted that "Reti" and "Lasker" are fighting for the league championship, which was often the case in those years. "Lasker," in the early years of the state, was by far the strongest club in the country, even as chess activity began to flourish again. So when some of its top players left to form "Reti" in the mid-1950s, for the next period these two clubs were at the top.
פורסם על ידי Avital Pilpel ב- 7:30 AM No comments: 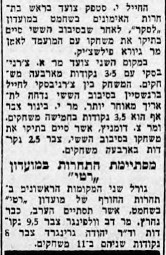 A frequent correspondent points out to us the following note about the "Lasker" (top) and "Reti" (bottom) tournaments in winter 1960 (the source is Ha'boker, 30 March 1960, p. 3.) The interesting point is that in Lasker's "training tournament," the leader is Stepak, then a soldier, who just drew Pilscchnick, another young player. Another soldier, Bernstein, is also mentioned.

On the other hand, Reti's "winter tournament" is still old guard: the winners were Wolfinger and Gruengard, both of whom were already active in the 1940s and earlier.