Jews came to Israel, or Palestine, from many countries. In the 1961/62 Israeli chess championship the result was that the players were, in effect, an international team: Jewish emigrants from all over the world, as well as native-born Israelis.

That's from six to eight different languages, depending on what exactly was meant by 'Latin', and whether to count 'descriptive English' notation as a separate "chess language" than 'English' (here meaning algebraic English notation).
פורסם על ידי Avital Pilpel ב- 1:53 AM 2 comments:

I wonder if many chess books have such a (numerically) impressive list of those involved in producing the book as Alifut Israel Be'Sachmat 5722 [Israel's Chess Championship 1961/62].

From the second page (English spelling is sic):

In cooperation with the Israel Chess Federation

The book is quite a good book -- many deeply annotated games, photos, etc. -- especially considering the time period (early 1960s Israel, long before computers.) It is nice to see credit meticulously given, considering the chess world's sad history of plagiarized work.
פורסם על ידי Avital Pilpel ב- 1:38 AM No comments: 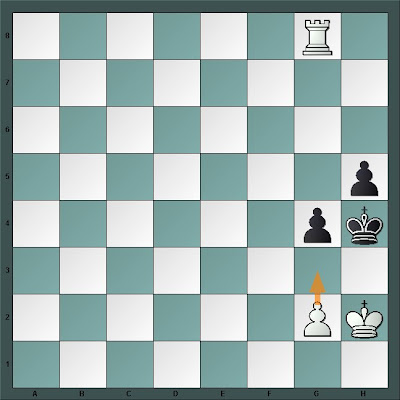 In a game that reached the following position, from a recent Israeli league game between Yuval Shatz (White) and Shaul Tal (no relation of the world champion), two children who are coached by the trainer Ya'akov Peleg, Black played:

Peleg congratulated Tal for finding this clever stalemate combination. Tal said, in surprise: 'I didn't even notice the stalemate! But what other legal move did I have?'

The players had created a help-stalemate in two (and a clever one, too...) over the board. 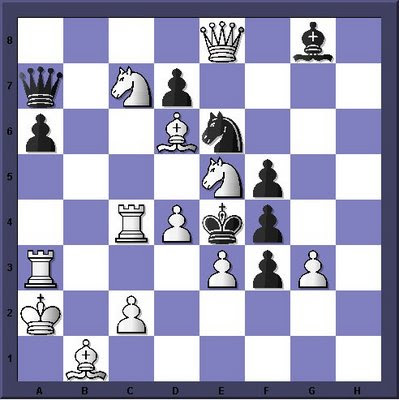 He is greatly surprised by the high level of the problem: two thematic variations, a cross-check with a block, self-pinning and two batteries -- a very nice problem which, he notes, 'is hard to believe was created by an unknown composer' -- Y. Ben Shahar -- 'who only published one problem'. (The solution, as usual, can be seen by highlighting the invisible text below).

In general, notes Fasher (ibid., p. 36), the level of chess problems before 1939 was low: 'In 10 years, about 90 problems were published, of which a large percentage were plagiarized.' This was easy to do, since 'the editors of the chess columns had little understanding in chess problems'.

However, he adds (ibid., p. 37-41), in 1939 we see 'a mass of new problems' from well-known problemists emigrated to Palestine from Europe, and things began to improve: by 1941, many 'quite high level' problems were being composed, especially two-movers.

Once more, Adolf Hitler had, unintentionally, helped the intellectual climate in enemy countries by expelling the brightest people from the land under his control due to their ethnicity. This was true in all fields -- from nuclear physics and mathematics, to art and chess problems.

Israel and the Arab world over the Chess Board 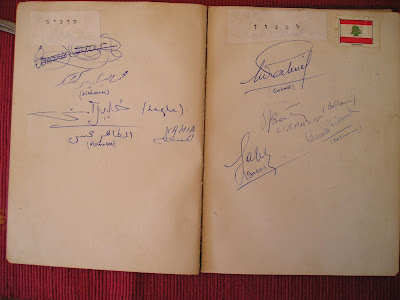 Yet again there are attempts at achieving peace in the Middle East. Leaving the politicians aside for a moment, it should be noted that such peace perhaps is easier to find on the chessboard than among the diplomats. Eliezer Pe'er, the team captain of the Israeli team for the 1960 Leipzig Olympiad, had gone around signing up the players in a notebook which was mention before in this blog. Among other teams, the players from Lebanon (right) and Tunisia (left, without a flag) signed their names -- in Arabic, too!

After the signing of the peace agreement with Egypt, one of the first cultural exchanges, as Yochanan Afek told me, was to send the Israeli chess players for a tournament with their Egyptian counterparts. He added that the trip was a bit of a consolation for Moshe Czerniak's wife for 40 years of "chess widowhood"... below, a copy (from Eliyahu Fasher's and Yosef Porat's book, Yosef Porat, Aman ha'Sachmat [Yosef Porat the Chess Master], Israel: Ha'Kibutz ha'Meuchad press, 1989, p. 94) of the tournament's memorial document. The headline is (in Hebrew and Arabic): "Israel - Egypt: First Joint Chess Tournament, Cairo, 5 / 1982". It is signed by all the players and participants. 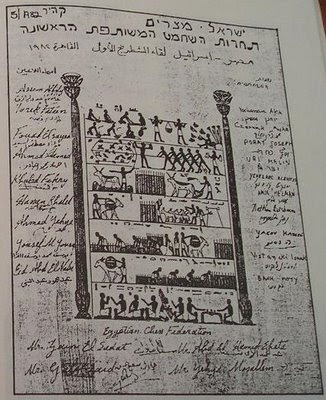 "A Difficult Position for Both Sides" 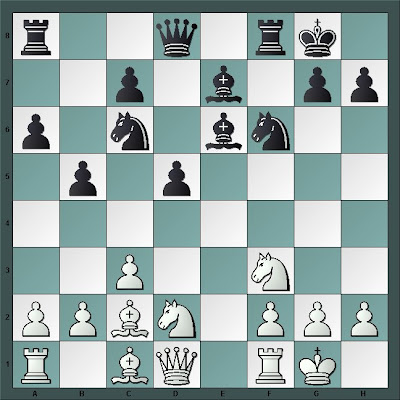 Both sides are lost?

(This has nothing to do with Jewish chess history in particular, but...)

There is an old story about Saviely Tartakower saying that, observing the position in a game between two amateurs, quipped, "both sides are lost". Like most such "good stories", it is very probable that the story is simply fiction.

Is that in the original Dutch, as well, or is it a translation error?
פורסם על ידי Avital Pilpel ב- 9:20 AM No comments: 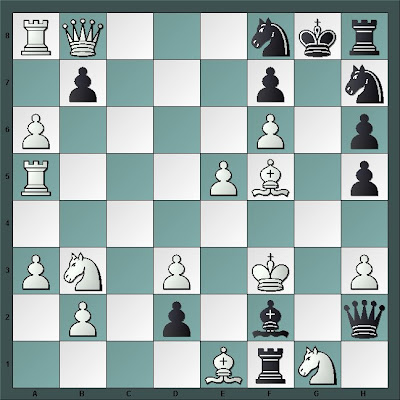 As is well known, Israel is not exactly popular in the UN -- or, very often, with the USA, either. Israeli chess columns sometimes got back at the UN with their problems or comments. Here is an amusing example. The problem above was a published in Al Hamishmar during Purim (a Jewish holiday that is a combination between Halloween and April's fools' day) -- when not-so-serious problems or games are traditionally given.

"The pieces in the four corners of the board in problem no. 1074 create the letters [in Hebrew, of course -- A.P.] of our crucial year, 5717 [in the Jewish calendar, starting fall 1956 -- A.P.]. We presume the special position is the result of a weird game, which was played according to the rules of the game, but against its spirit. We imagine the imaginary players of this Purim game were similar to the UN's secretary general."

In the solution (published two weeks later, on 5.4.1957) the editors added that "the solution is surprising" and "each of the pieces which make up the letters in the diagram plays a role and must stand where it is. We congratulate Rivlin for his creation."

By coincidence, the very same column has a report about a "young student", one Mikhail Tal, who has just won the USSR's championship with 14 points, ahead of Bronstein, Keres, Tolush, and others. This is one of the first -- perhaps the first -- mentions of Tal in the Israeli press.

(As usual, highlight the hidden text below for the solution).