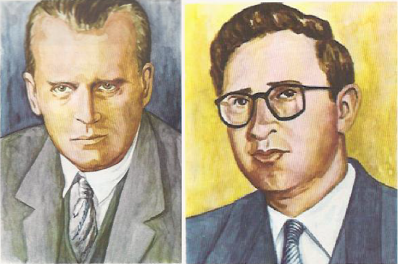 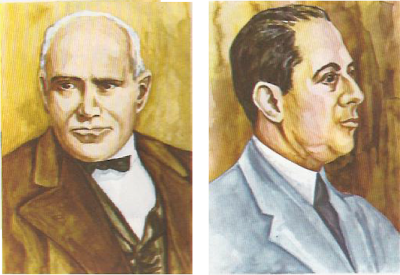 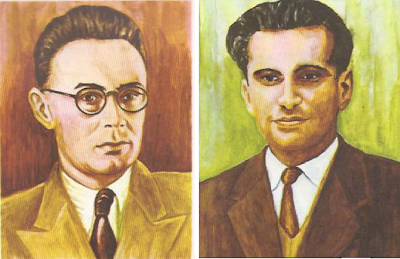 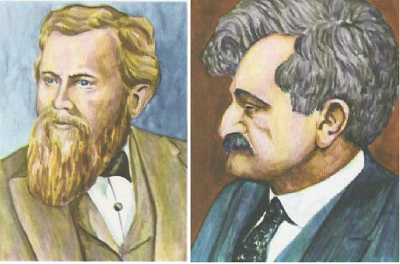 The above illustrations are all taken from Tarbut iillustrated encyclopedia [Tarbut,2nd ed. [1963], Tel Aviv: Masada], the Israeli version of the Italian Conoscere encyclopedia, which also published versions in other countries, with local material added -- i.e., in the Israeli version, articles about Jewish history, Israeli geography, etc.

The Italian source of encyclopedia, by the way, solves the long-standing mystery many of my generation wondered about as children in Israel, namely, why the encyclopedia has so many articles about Italy and, in particular, about the Roman Empire.

They are from two articles: "The Royal Game", pp. 2351-2352, and "Jews in Chess", pp. 2356-2358, both in vol. 13, with -- of course -- the Jewish players' illustrations coming from the latter article. It might be hard to recognize Tal, and to wonder why Steinitz became blond and blue-eyed. Poor Capablanca has a rather toad-like appearance, while Alekhine too became a blond-haired man.

How can such an artistic disaster occur? The Hebrew-language Wikipedia article about Tarbut notes the Hebrew edition used the same Italian artists of the Italian edition, even for articles especially printed for the Israeli edition. In translated Italian articles, the original art was quite good. But it seems that in Israeli-only articles -- not only the chess articles, but also those about, say, the Israeli philharmonic Orchestra or the Ha'Shomer, the pre-state paramilitary Zionist organization, to note two examples from the same volume -- were illustrated differently.

The Italian illustrators were apparently asked to color black-and-white photographs, presumably sent to them by the editors of the Israeli edition, with color choice left to their imagination. Clearly this was the case in the chess articles in particular, where the illustrations are all from well-known black-and-white photos.

Not only did the illustrators often get the colors wrong, but coloring small black-and-white photographs didn't sit well with their usual [and, to those of my generation, instantly recognizable] bold, colorful gouache paintings, a medium not suitable for picking up small details from photographs or making fine distinctions in shades of color.

Kasparov as seen by Mortals

The following picture -- Kasparov, presumably in one of his games against Anand [the flags suggest] -- appears in the National Review's web site in an article by their political correspondent, Jay Nordlinger. He notes that he saw Kasparov in Oslo during a human rights conference, and adds:


I see Garry Kasparov in the hallway. Whenever I glimpse him — which is usually at this forum — I think, “What is he thinking? Normal stuff, relatively normal stuff? Or stuff beyond the imagination of the average person?” (Kasparov is one of the greatest chess champions in history.)


Does interest in chess run in families? Several members of my family play chess on a decent level. Recently, I have found the following photo -- sent to my by a relative [see photo caption]. This is my great-great-grandfather, Aaron Czarnoczapka, playing chess with two of his daughters. The picture was taken in Poland, ca. 1920. More on the Czarnoczapka family can be found here, on my grandfather's memorial site.
פורסם על ידי Avital Pilpel ב- 1:08 AM No comments:


In Moshe Marmorosh's chess column from the 1930s we find, occasionally, rather interesting things that have nothing to do with chess. One of them is that a certain young solver -- "Y. Mosinzon" -- occasionally is acknowledged as a solver. Unless I am very much mistaken, this is the writer Yigal Mosinzon [link in Hebrew], the author of numerous Hebrew books and plays and one of the most important writers of the early decades of the state of Israel.

Apparently, Mosinzon, who died in 1994, kept his love for chess all his life, as can be deduced from the photo above, from the following blog [in Hebrew] by the Israeli writer Yigal Serena, who also notes that Mosinzon would regularly meet with his "good friend Tommy Lapid" to play chess.

He is particularly well known for his play Kazablan [made later into a now-classic movie in Israel, starring Yehoram Ga'on], and above all for a series of children's adventures stories, Hasamba -- the acronym of Havurat Sod Muchlat Be'Hechlet, a tongue-in-cheek title that can be roughly translated as "Gang of the Really Top Secret Secret". It is about a group of children who are, in effect, a commando unit which discovers spies, rescues Israeli soldiers from prison, help IDF special units or Mossad agents accomplish dangerous missions, and the like.

For people of certain generations who grew up in Israel, Hasamba, and the heroes of the series, were as popular and well known as, say, Superman or Batman in the USA. Indeed, Mosinzon wrote the series partially to provide Israeli children with Zionist-themed popular reading, instead of Tarzan or other foreign influences. The series' enormous success was a Pyrrhic victory for Mosinzon: actually a serious writer, Hasamba eclipsed everything else he did, despite the fact that, as the less-than-serious name of the series shows, he never took it too seriously from the literary point of view.

Still, Mosinzon's talent showed even in such popular work. Despite the fact that the heroes fought British or, later, Arab antagonists that were usually stereotypically typecast, there were many individualized and even positive Arab or British characters. Also, the female member of the group -- perhaps due to Mosinzon's exprience in the pre-IDF Palmach para-military organization where women, out of necessity, served in combat roles with men -- is just as brave and active as the boys.

I do not recall offhand any reference to a chracter in Hasamba playing chess -- but perhaps a reader can enlighten me.
פורסם על ידי Avital Pilpel ב- 2:09 PM No comments:


Quick note -- the Israeli Philatelic Federation has a complete collection of the chess-themed stamps that came out in Israel. They are relatively few, but what is interesting are the stamp-cancellation rubber stamps [I hope it is clear what I mean...] used on particular days to commemorate events.


This is a quote from an article given to us by a frequent contributor to our blog. It is about the history [1940s-1960s] and present [1970s] article on the state of chess compositions in Israel and pre-state Palestine by Eliyahu Shahaf. The article deals, in particular, with the Israeli Problemists' Congress which took place in Rishon Le'Tziyon on Dec. 22nd [1979], which dealt both with showing the current achievements and reminiscences of the "old guard" -- including Shahaf himself, which met there Daniel Yitzhaki, and they spoke of their activity in the Palestinian Problemists' Association in pre-state days.

It is well worth reading for Hebrew speakers. For the English speaking readers of this blog, some interesting points Shahaf makes. Above all he notes that chess composition is an art, where aesthetics dominate over practical considerations -- but when a good problemist shows his achievments, the general view is that it's a pity he didn't use aesthetic talent for painting or some other field of art.

Some other points -- which show that problemists suffer from the same problems all over the world at all times, it seems:

1. Only technically [the use of the same board and pieces] are chess composition and chess play related. In reality they are two different fields. Cleverly, he notes that while it's quite true that chess composition is useless to the practical chess player, opening theory is similarly useless for the practical endgame or problem composer, yet nobody considers that a problem.

2. Israel is a chess composition world power [Ma'atzama], yet not only it is not appreciated by the public, it is hardly even known to the general public -- and even to many chess players. Even mention of composition achievements is missing, not only from the general press, but from most chess columns.

3. In Israel there were at the time thousands of registered chess players, but only a few dozens of problemists, which are -- for administrative reasons -- considered part of the Israeli Chess Federation, and suffer with it from lack of funding. But a lot of volunteer work and enthusiasm allow the publication of The Problemist, their magazine.

5. There are plans to write a new book on the history of problemists in the 1964-1980 period, to update Eliyahu Fasher's 1964 book Ha'Problemai Ha'Israeli [The Israeli Problemist]. [So far as I know this had not occurred - A. P.; however, only recently a book updating the achievements up to 2010 had been published.]