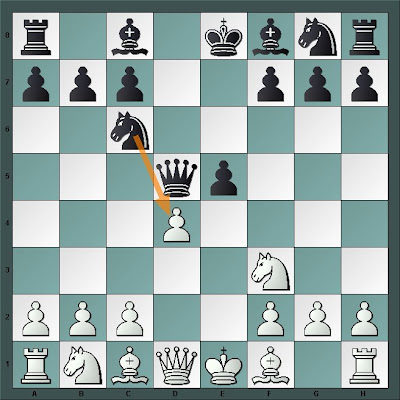 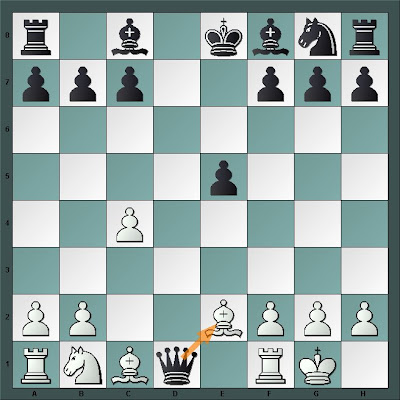 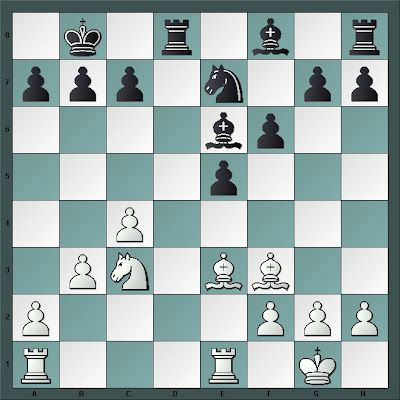 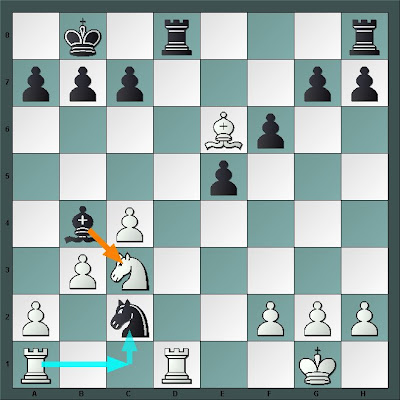 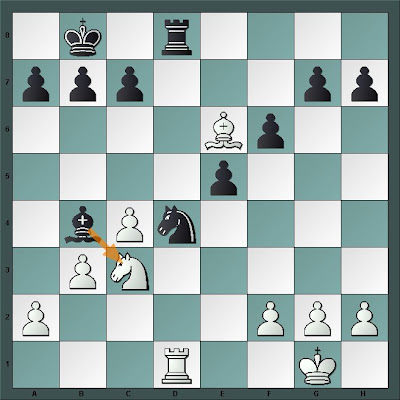 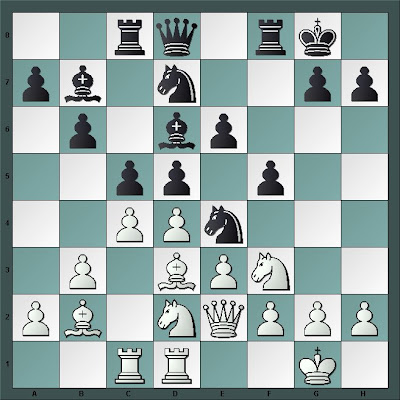 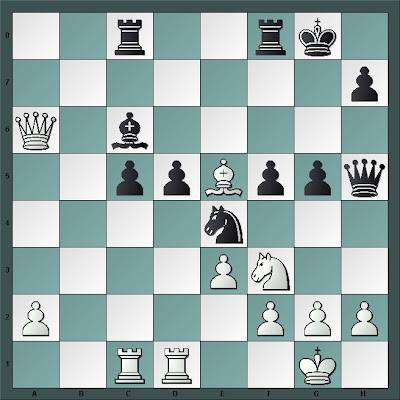 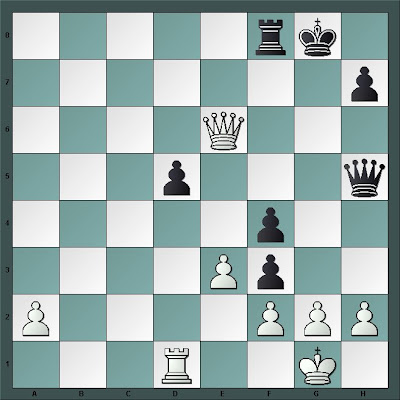 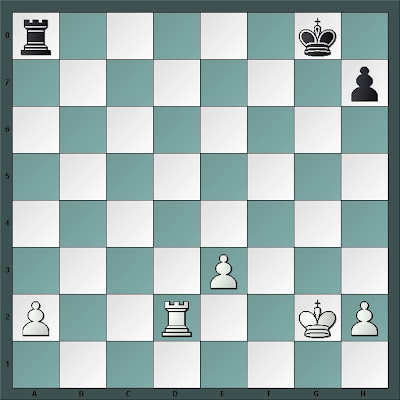 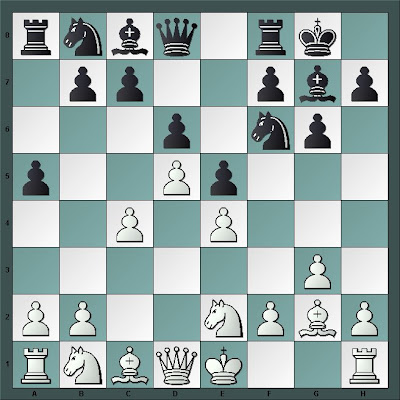 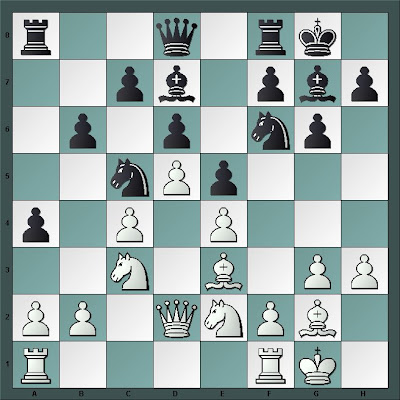 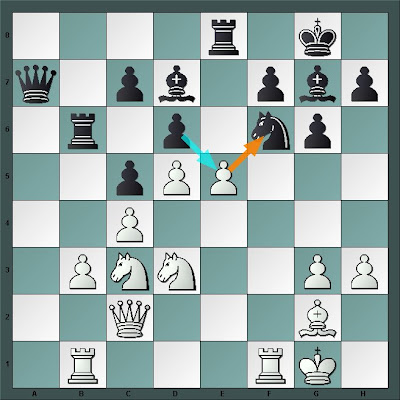 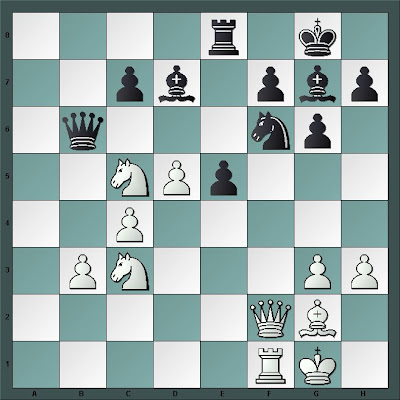 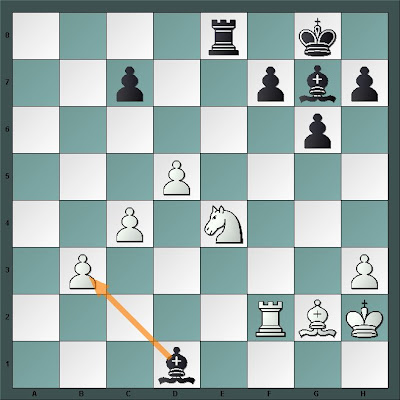 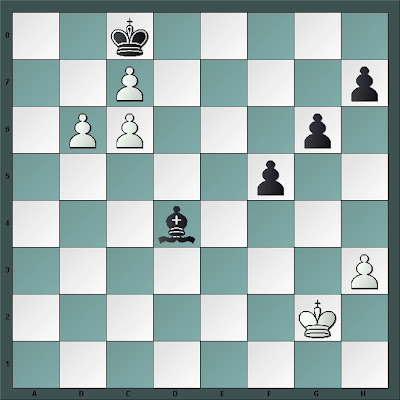 Okay, this has little to do with Jewish chess history in particular, but it's one of my pet peeves.

One of the curses of chess literature is the numerous poor books that pass uncriticized by reviewers. Edward Winter is famous for taking such authors and reviewers to task, and I would like to add my own minor contribution.

In a recent review in www.chesscafe.com -- which, actually, generally does a good job in criticizing worthless books -- 606 Problems for Chess Nuts (2008 Sterling Publishing) by Fred Wilson and Bruce Alberston is reviewed rather positively by Steven Goldberg. I haven't read the book, I must admit, but I strongly suspect its quality when the puzzle used to illustrate it in the review is the following, puzzle #354 (Black to play):

The book's solution is 1... Ra3+. This is indeed the best move, as it wins a full queen (or mates) but neither the reviewer nor, apparently, the authors bother to note that the much simpler 1... exd5 (or, even simpler, 1... Qxc3+ 2. bxc3 2. exd5), while technically "only" winning a rook, are much simpler, as they win just as easily and without any sacrifices or complications.

This, mind you, is supposed to be a realistic position for the 'intermediate player'. How many intermediate players have their opponents hang rooks to them in such a fashion? And, if they do, how many bother to calculate deeply to see if it isn't possible to win the Queen instead, risking a mistake or loss on time?

Having a few of Wilson's and Alberston's other books, they display all the usual signs of hack work: mostly trivial tactical problems, only two problems per page (to take up as much space as possible, in order to make the book look longer than it is), and so on. Apparently this latest book is no different, as it too, the reviewer notes, has two problems per page, and a full 1/3rd (202) of its puzzles are dedicated to what the authors call 'advanced beginners' (an oxymoron), which means people who are 'thoroughly conversant with the moves and rules' of chess. If that makes one an "advanced" beginner, what, pray tell, is a novice?

Naturally, the market for such "advanced" beginners is larger than the one for advanced players -- there are more of them, and they're far less discriminating. So it's easy to pass on to them, as Edward Winter says, dregs pretending to be cream.

It is very easy to write chess books for beginners; it's very hard to write good ones. Reviewers shouldn't pass off every collection of trivial tactics that comes down the pike as 'helpful', but should take a good, hard look at the book's merits and demerits. 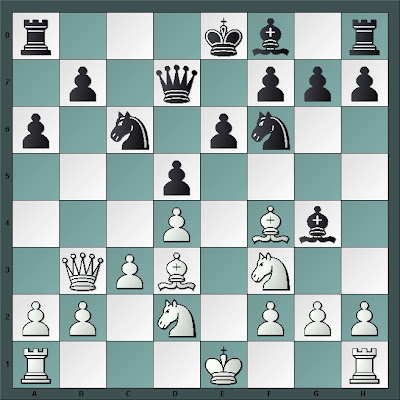 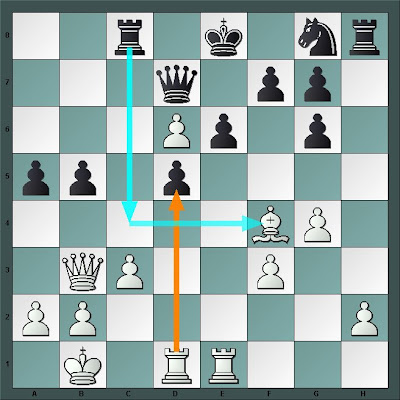 Black counts on capturing the weak d6-pawn; whereas White defends until it he can produce a strong, direct attack on the black king, when he gives the d6-pawn away and quickly transferring forces to the kingside achieves the advantage. 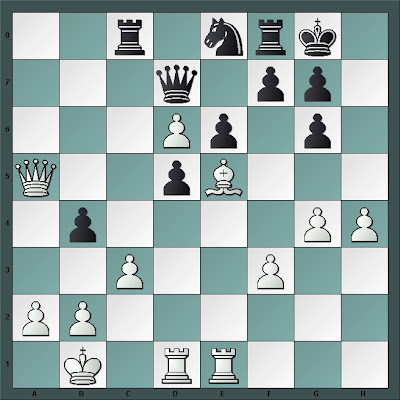 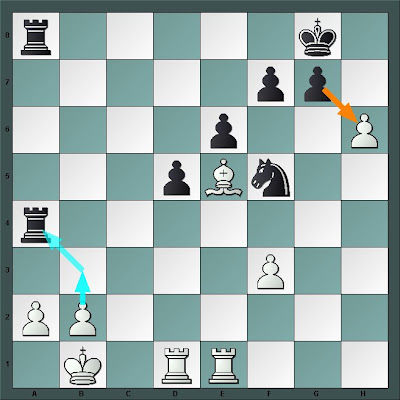 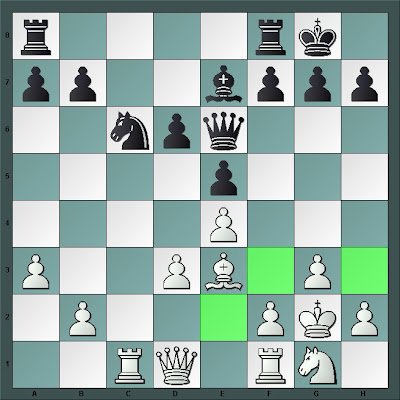 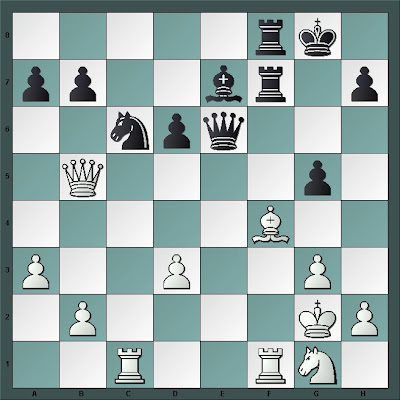 Black energetically heads for victory. The last move secures the f-file for Black's rooks. However, the excellent g1–knight saves an almost hopeless position. 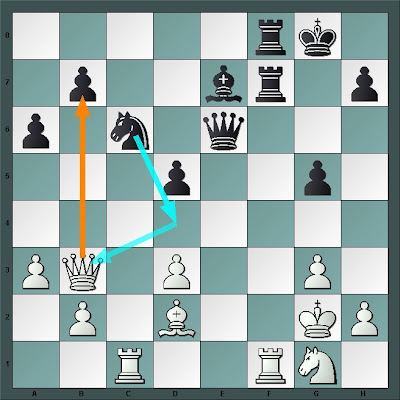 24... Nd4? This saves a hopeless situation. (Black overlooked the winning move 24...Bc5!! with the further 25.Rxf7 Qxf7 winning... The text move allows White to completely equalize the game.)

As said before, Yochanan Afek had kindly let me copy Moshe Czerniak's notebook of his games in Poland in the 1920s. The notebook includes a match between Czerniak and Miguel Najdorf, which I mentioned before -- see the previous post on this blog about the Najdorf-Czerniak match.

Marek Soszynski had kindly agreed to transcribe the games and the annotations into 'Chessbase' format. He, together with Tomasz Lissowski, encouraged me to contact chessbase to see if they might be interested in publishing it. They have just contacted me and said they'll add it to their upcoming mega database 2009, and that I 'need not delay' in publishing it on my blog. Therefore, I am finally doing so.

Mr. Soszynski notes: 'All the games and the variations [in the chessbase format, which I reproduce in this blog - A. P.] are Czerniak's. I have added practically nothing', although some annotations were omitted as 'flawed or uninteresting', and others (the majority) due to the illegibility of the original manuscript. 'The standard of play was high. All the games, without exception, were interesting - with a rich combinational thread. The second game of the match merits particular attention'.

In the following posts I will enter the games one by one.

There is an old story -- or, rather, libel -- that Steinitz (incidentally, a Jew, of course) had once said that he could beat God even if he gave God pawn-and-move odds. Naturally, no exact source is ever given for this alleged saying, and it is merely repeated from one book to another whenever an incident about the alleged insanity of chess players in general, and masters in particular, is needed to spice up the book.

Wilhelm Steinitz, who was self-confident enough to once say that even God couldn't give him pawn and move...

Naturally this version of the story is unattributed, and it is used to "spice up" an article about opening theory. However, it follows Irving Chernev's The Bright Side of Chess [1948] in suggesting that Steinitz did not claim he could beat God while giving pawn-and-move odds, but merely that God could not beat him if God gave him pawn-and-move odds. (See Edward Winter's article, Steinitz versus God).

There is, naturally, a great difference between the two claims. In Chernev's and Shahaf's version of Steinitz's quip, 'God' is just a metaphor for 'a perfect player', and the claim is pure Steinitz: colorfully put and not suffering from false modesty, but in essence simply the insightful (and perhaps true) claim that the playing strength of the best masters of his time had so improved, that it practically close to perfection. (This happened, presumably, due to the new, scientific understanding of the game's strategy, of which Steinitz was the most important developer.)

One wonders (see also Winter's article) whether Steinitz really made either claim. It is doubtful he ever did. But, if he did, I would bet a significant sum he made the latter claim, and that sensation-seeking writers, making use of Steinitz's real mental illness at the end of his life as an excuse to print "crazy chess player" canards, turned the story on its head and made Steinitz's perfectly reasonable remark into "proof" of megalomania. 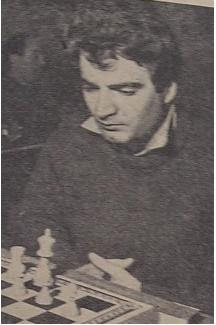 The Israeli chess championship of 1961/62 (officially, of the Hebrew year H'TSKV -- 5,722 -- which began in September 1961) caused a sensation: the three winners (with 9.5/15) included not only IM Yosef Porat (who played in all previous championships, from 1935 on, only once finishing below 3rd place) and Itzchak Aloni (a player in the championships since 1945 -- which he won -- finishing below 3rd only twice), but the 28-year-old Zadok Domnitz. Not only did he not have any FIDE title, he was not even an Israeli Chess Association master -- merely a 'senior candidate master'. The other participants were mostly ICA masters, including two FIDE IMs (Porat and Moshe Czerniak).

Domnitz is probably one of the lowest-rated players to ever win a national championship, at least in countries where chess is popular. His victory caused quite a sensation, although Aloni eventually won the championship on the three-way tie-breaking match (scoring 2 /2). (To avoid a possible misunderstanding, 'low rated' does not imply 'weak'!) 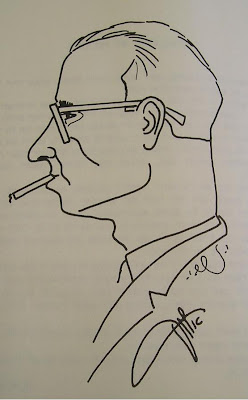 From the book given above (p. 117), in the English-language introduction by Shahaf: 'Granted, he is not the expert as far as openings [sic] theory is concerned... "colour being the only element uniting his pieces after they have left their initial positions", as one [critic] had put it.'

Or, as quite a few of those I interviewed about Aloni put it: 'he felt lost if he came out of the opening with a reasonable position'.