Our correspondent, Hebert Perez Garcia, had sent us another video, also available on his Youtube channel -- '10th Aegon Human vs. Computers The Hague 1995'. The Jewish connection? Many famous Jewish players -- the Polgar sisters, David Bronstein, etc., as well as (of course) many non-Jewish ones. This was, of course, back in the days when top players still had a chance to beat the machines!
פורסם על ידי Avital Pilpel ב- 1:11 PM No comments: 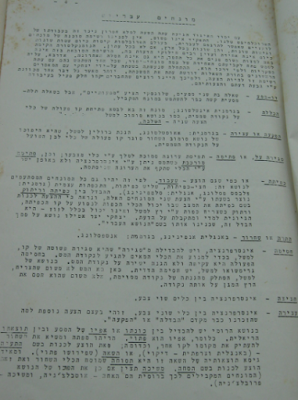 We have previously noted (see "Chess Terms" in the blog's labels, right) the creation of Hebrew chess terms was a serious issue in early Palestinian chess. This also was the case with problemists' terms. The first "official" suggestion we are aware of is above.

By their very nature, it's pointless to translate the terms back into English as an explanation, but we note that the introduction notes that the list is a continuation of a list made by Itzhaki (ph. spelling) earlier, and is intended as an improvement of that list, but not as a final decision -- 'on the contrary, we expect members to take an active part in shaping it'. The list also concerns itself only with the most basic terms (e.g., how to translate 'cross check', 'critical square', and the like) and not with more technical terms 'of the logical school' which are 'not well known among us'.

This open-ended and reasonable approach probably was a reason why many, if not most, of the terms suggested in the list are still in use, although a few might make a contemporary Israeli problemist smile. The list itself is mostly based on German and English terms. A curious point is that the poet Avraham Shlonsky, which we have met before as a chess player, is credited with suggesting the term Masa'otayim (מסעותיים) for a two-mover, but this was rejected since it is the grammatical dual of Masa (מסע, move) -- which by its nature cannot be extended to 3- or more-movers.
פורסם על ידי Avital Pilpel ב- 6:09 AM No comments:

The top note (Davar, May 6th 1931, p. 1), deals with Rubinstein's live chess display against Marmorosh, which took place on 9/5/1931, and notes that the clothes worn by 32 actors were 'based on designs by the painter Emanueli'.

Moshe Roytman, our frequent correspondent, wonders if this is Emanuel Luftglas-Emanueli , 1896-1958 (link in Hebrew), who is mentioned, inter alia, as a stage designer for the TEI (Teatron Eretz-Israeli, 'Palestinian Theatre') in the second cutting above, Davar, Aug. 5th, 1926, p. 1.

It seems very likely that it is him. It turns out that Emanuel Luftglas, as he is usually known, was the first formally-trained stage designer in Palestine, who worked in many theatres after emigrating to Palestine in 1922.

Roytman also provides a link to a long article about the man and his work (Davar, May 8th, 1964, p. 20) and a tribute page by his grandson (both links in Hebrew). It seems that 'Emanueli' was never his official last name, but a "professional" one, based on his first name. Perhaps he followed the common Zionist custom of using a Hebrew name instead of one's foreign-sounding birth name. 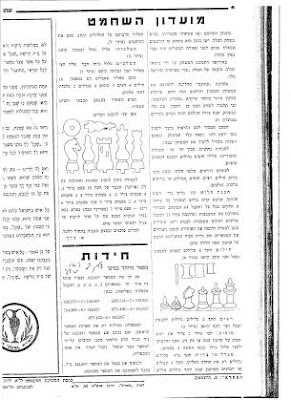 Amatzia Avni informs us that, while browsing Tel Aviv's 'Beit Ariela' library's newspaper archives on another matter, he discovered by chance that a 1930s children's magazine, Itoneynu (presumably Itoneynu Le'Ktanim, 'The Children's Newspaper'), had a chess column.

Avni sends us the first two column, from 1937; the first has instructions on how to make a chess set from old thread spools (of the type used by sewing machines, then common in many houses) and other household materials. The second describes the rules of the game. The author of the column was "E. Derech" (א. דרך), a short for the Hebrew expression Eben Derech, 'milestone'. Does any reader know who 'Eben Derech' may have been?

Avni notes that he is surprised that the chess column starts with instructions of making a chess set, since cheap sets were widely available, even in 1930s Palestine. It seems to me from the context -- a children's magazine -- that the "make your own chess set" instructions were meant as an independent arts & crafts activity.