Edward Winter had kindly published an item about Najdorf and a currently unknown opponent, based on a photograph from Ami Barav we have forwarded to him. See Chess Notes 10927.
פורסם על ידי Avital Pilpel ב- 1:34 PM No comments: 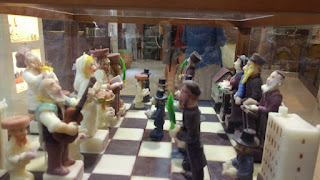 A close relative, on holiday in Safed, Israel, sent me these two pictures. Decorative chess sets of army X vs. army Y are common (French vs. English, Elves vs. Orcs, etc.) but I admit I never saw a Hassidim (white pieces) vs. Mitnagdim (black pieces) before, juxtaposing the two main groups of ultra-orthodox Jews. In the bottom picture, there is a more abstract set, which apparently is a green(ish) army of flowers doing battle against a white one.

The pieces of both sets are made of wax, and even have wicks -- i.e., they are in fact candles. The reason is that they both sets are display pieces in a specialty candle factory -- Safed Candles. A Hebrew-language review of their store has many pictures that show the store's interior, complete with a Noah's ark made completely of wax.
פורסם על ידי Avital Pilpel ב- 5:18 AM 1 comment:

A frequent correspondent notifies us of the interesting "snapshot" of the Israeli first league in 1960. We see the "old guard" in Jerusalem's Rubinstein club: Czerniak, Dobkin, Mohilever and others. We see a "mixture" in Tel Aviv's Lasker club: Aloni and Oren, but also the young Domnitz. The IDF's and the students' teams naturally feature young players: Kraidman, Guti, Stepak, and others. Tel Aviv's Reti has the "old timers" Smiltiner and Barav but also the young Persitz in the first board.

Of particular interest is the Bat Yam club, which has Gereben in the first board, but the article (by La'Merhav's chess columnist, Fasher) notes that he already left the country -- and that Bat Yam also lost Ya'akov Mashian, the Iranian-Jewish master, 'who also left the country'.

Mashian returned to Israel in the mid-70s (at least according to Wikipedia), and -- incidentally -- played with Stepak a 193-move game in the Israeli championship semifinals (Stepak won, 1:0). This game, according to Tim Krabbe, was the longest recorded game ever played for seven years (1980-1987), and is still the longest game in time -- 24.5 hours -- 'a record it will forever hold'.

As for Gereben, he had emigrated to Israel in 1959 and played in the 1959 Israeli championship (coming in second), but left the country soon afterwards, as Fasher already notes. Ha'Tzophe of Oct. 9th, 1959, p. 4, notes our correspondent, says the 'Erno Gereben (Grünfeld)' had come to the country shortly before the championship began. Can any reader explain why 'Grünfeld'?

Edited to add: a frequent correspondent noted that the English-language Wikipedia entry for Gereben has his birth name as "Ernest [or Ernst] Grünfeld' and adds:


This name change, with other survival skills, probably helped him survive the holocaust. It was printed in the Israeli press that during one of the Olympiads, a Hungarian player, in a worse position, whispered to the Israeli player (in Yiddish) 'I am a Jew', and the game was drawn.

It turned out to be Gereben. Based on the details given by our correspondent, an Olimpbase and Chessbase search reveals the game is probably Gereben - Kniazer, Amsterdam 1954, ending in a draw in the following position: Whether all this is necessary, given that Black is a queen up in the initial position anyway, is to me unclear.
פורסם על ידי Avital Pilpel ב- 7:23 AM No comments: 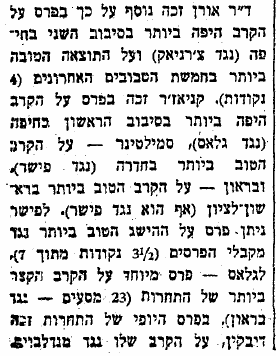 This makes for five beauty prizes, a special prize for the shortest game (presumably, the shortest decisive game), a prize for best performance in the last five rounds, as well as (as Davar reports, April 6th, 1951, p. 12 of the weekly supplement) five "regular" prizes for overall placement as 1st to 5th. making it a total of eleven prizes for an 13-person tournament, or -- since (as Davar reports) the fifth prize was shared by three players, 13 prizes in a 13-person tournament.
פורסם על ידי Avital Pilpel ב- 6:42 AM No comments:

It was played against 123 children from 23 schools, 'including the school for the deaf-mutes and the Arab school'. We see here an early example of chess being used as an inclusive activity.

The results were: Oren +58 =1 -1, Czerniak +59 =1 -3. An excellent performance from both, even if one assumes that the level of play was (these being school children) below that of the average enthusiast.
פורסם על ידי Avital Pilpel ב- 6:10 AM No comments:

From Hon's comment: 'Botvinnik and Ragozin, training together for the match against Bronstein, also trained in this healthy way'.
פורסם על ידי Avital Pilpel ב- 1:35 AM No comments:

The reporting on the 1951 Israeli championship in Davar's chess column (edited at the time by Shaul Hon) was quite extensive, and has many photograph which were later reproduced in other books (including Hon's own...). Here is his report of the Glass - Kniazer game, played inthe 8th round, with Hon's annotations. Kniazer -- who lived in Haifa -- won a special prize from Haifa's municipal government for this victory.

The same game was later analyzed in more detail in Persitz's book of Kniazer's best games, Ha'Derech Le'Nitzachon Be'Sachmat [The Road to Victory in Chess] (1959, with an introduction by Kniazer.) The remarks are broadly similar, although Persitz analyzes in more detail. White, both agree, wrongly believed his attack on the king's side will succeed, while Black correctly sacrificed one exchange and offered to sacrifice another to make sure his attack will be first. 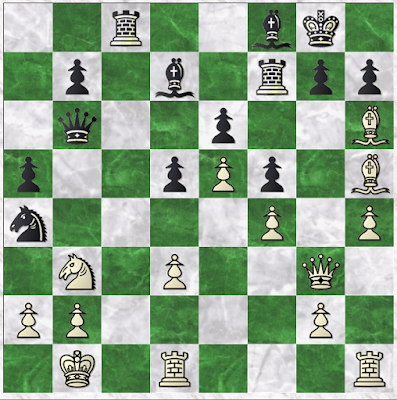 Now Black's plan is revealed: he prepared a counter-attack. He sacrifices an exchange so as to win the second bishop easily later. 22.Rc1 Nc3+! 23.Rxc3 Rxc3 24.bxc3 a4 White can cause no harm on the king's side, while Black has a crushing attack on the queen's side - with the assistance of the two bishops. 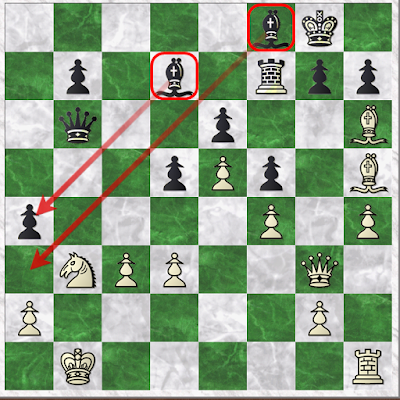