Rising from the Dead

A conversation I had recently, with a well-known politician who has chess connections:

Politician: Who else did you say you interviewed?
Me: Look here. [show him a computer screen with files].
Politician: That's from Eliezer Pe'er, I see. Did his widow give you these?
Me: No, he himself--he's 95 but still alive.
Politician: Oh, dear.
Me: Are you sorry he's alive?
Politician: No, but, you see--we've just passed a resolution in the city council to possibly name a street after him, and...
Me: You just assumed he was dead?
Politician: Let me put it this way: it was approved by the same committee who refused to name a street after Raul Wallenberg for decades, since it was theoretically possible he's still alive.
פורסם על ידי Avital Pilpel ב- 7:33 AM 1 comment:

Czerniak about the Great Players

Moshe Czerniak has met--and played--many of the past greats of chess history. A partial list of his views of them is found in his book, Toldot Ha'sachmat ('History of Chess' (1963). Tel Aviv: Mizrachi Press.)

Frank Marshall: 'When the Palestine team played the USA [in the 1935 Chess Olympiad -- A.P.] it was the late David Enoch's turn to play Marshall. He played well and had a considerable advantage (two pawns) and was sure he would win easily. I remember that during the adjournment I warned Enoch to be careful, precisely because he has the advantage, for he is playing the "king of swindlers!" And indeed, what I feared happened... one inaccurate move was enough for Marshall to pull out of his sleeve a counter-combination and draw the lost battle. You should have seen the old man's joy after saving the draw; it was as if he had won.' (p. 53).

Jose Capablanca: 'In 1939, Capablanca admitted to me that "for some reason" he finds it hard to beat even relatively weak opponents (he meant regular masters), and his game isn't as accurate as it used to be. He told me [this is] "because today chess is no longer a struggle of intelligence and talent, but also very hard work, one needs to know a lot of theory." (p. 59).

Savielly Tartakower: 'I knew Dr. Tartakower personally. I came to realize that behind the brilliant and somewhat cynical exterior, there is a man of rare fairness, honesty, and objectivity.' (p. 71).

Mir Sultan Khan: 'In 1931 I had the opportunity to play two games with him as he passed through Strasburg, on his way to the match with Tartakower... I was a young and inexperienced player, and of course was defeated by a giant like him. But when the games ended and we analyzed the games together, he amazed me with the numerous original ideas he considered during the game.' (p. 75).

Alexander Alekhine: 'That year I had the chance to talk with Alekhine about the reserve players [anshey ha'atuda--the context suggests it's a misprint for anshey ha'atid, "up-and-coming players"--A.P.] in world chess. The world champion pointed out four youngsters as greatly talented: Flohr, Kashdan, Nussbaum, and Sultan Khan. Only a select few got praise from Alekhine!' (p. 75).

Miguel Najdorf: 'In [the Lodz championship], that took place in 1929, he already showed his special style. He lost eight games and won only three, and I remember that, when he returned to Warsaw, he told me that there is one opening for White that Black cannot defend against! (He meant the Queen's gambit). The three games he won were chosen as the tournament's three most beautiful games!' (p. 83).

Samuel "Sammy" Reshevsky: 'Reshevsky... does not believe in studying opening theory... does not use seconds to analyze adjourned games... and wastes most of his time in the opening. In the Helsinki Olympiad I had a long talk with him, and when I noted all these weaknesses in his play, he replied: "I think none of that is crucial, not opening novelties, not adjournment help and not even rational time allotment.... one must simply find the mathematically best move at every position in the game, though this is not always possible over the board."' (p. 88)

David Bronstein and Tigran Petrosian: 'In the Belgrade tournament in 1954, I spent many hours with Bronstein and Petrosian, and we analyzed various games. I soon realized the difference in their approach. Bronstein was interested in discovering the way to reach the goal, while he left its execution to Petrosian.' (p. 91).

Petrosian and Flohr: 'During the Leipzig Olympiad, in 1960, I asked Petrosian if he had any beautiful games worthy of publications in the Olympiad. Salo Flohr, who say next to him, laughed: "don't you know, Tigran has no beautiful games, he has only good games!"' (p. 99).
פורסם על ידי Avital Pilpel ב- 7:09 AM No comments: 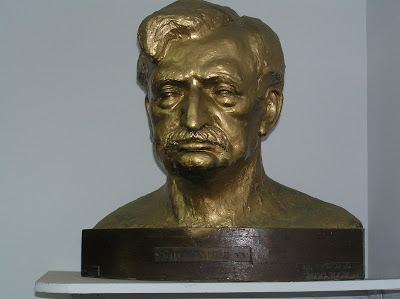 
This bust of Emanuel Lasker has been watching the action in the Lasker Chess Club in Tel Aviv for the past 50 years or so. It had travelled with the club in its various haunts. The three plaques on the base read, from left to right: 'P. N. Weber' (presumably the sculptor); 'Dr. Emanuel Lasker'; and 'A gift from the club’s president, Mr. Eliezer Rabinowitz'.’
פורסם על ידי Avital Pilpel ב- 7:01 AM No comments: 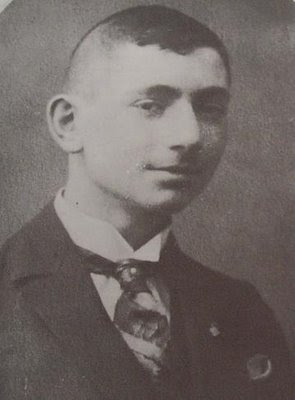 For those players who complain about how they lost games due to stress, poor playing conditions, being distracted by other concerns, etc. - a lesson from Yosef Porat, in a letter to Shachmat, (May 1983, vol. 22 no. 5, issue 240:155):

"In my hometown of Breslau in lower Silesia there were two large chess clubs: the Anderssen, which had only a few Jewish members, and the Morphy, which most local Jewish players joined and had a few prominent Jewish members among its officials. A few weeks after Hitler came to power the city championship began in the Morphy’s rooms (as is known Hitler originally was the head of a coalition government and only a few weeks later became a dictator [sic] and then the “illegal” attacks against Jews and other increased.) [Porat presumably means the great increase in Hitler’s power after the passing of the so-called “Enabling Act” of March 23, 1933-A.P.]

"The championship began in the middle of March 1933 and lasted about two months. There were a few rounds left when rumors began to circulate that the Nazis might invade the club at any minute (the anti-democratic and anti-Semitic forces then becoming stronger by the day). In all of the later rounds I came to play with a feeling of great mental stress: will the round end peacefully? It is very possible this stress affected my play, in any rate I didn’t win first place as previously but only second place. [after the non-Jewish master Gottlieb Machate, who also led the tournament most of the time—A.P.]

"Indeed, until the end of the championship nothing happened, but a few days later a group of SA men entered the club, expelled the Jews present, dismissed the management, and made the club into a 'National-Socialist chess club'. Some thought the Nazis would have done this sooner if I were leading the tournament!"
פורסם על ידי Avital Pilpel ב- 10:20 PM No comments:

In 1931, Akiba Rubinstein visited Palestine and gave a few simultaneous exhibitions, playing inter alia with the famous poet, Hayim Nachman Biyalik (see "A Genius Meets a Genius" on this blog). In one of his games he played Nussdorf, a nine-year-old boy. The game was published in Menachem Mendel Marmorosh's chess column in Davar on May 8th, 1931. The annotations are Marmorosh's. 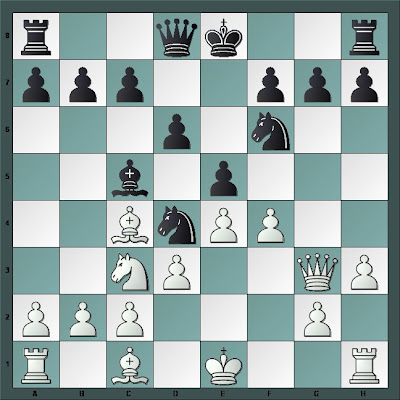 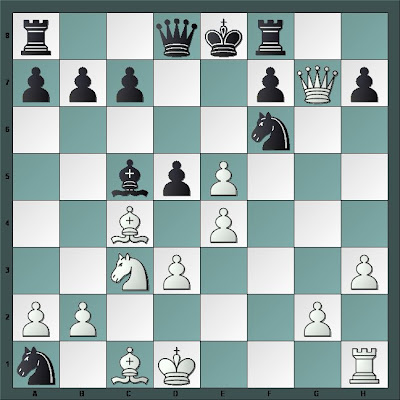 "An very interesting move, whose purpose is to lock out the Bishop."

Adds Marmorosh, "the wonder-boy showed great talent in his game and became the big sensation of the simultaneous exhibition."
פורסם על ידי Avital Pilpel ב- 5:17 AM No comments: 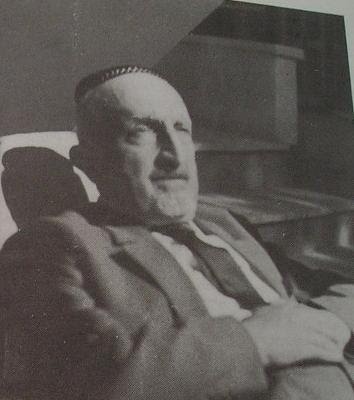 "He [Porat] learned chess at the age of 9 from a relative, his late uncle Dr. Alfred (Aharon) Weiner, a lawyer first in Berlin and later in Jerusalem. This man had an extremely deep understanding of chess, but for certain reasons he didn't play in a single tournament, and limited himself to offhand games with friends. He had one of the largest chess libraries [in Israel], which he donated to the city of Jerusalem.

"For decades Weiner had corresponence with Porat, starting in Berlin in 1925 and ending soon before his [Weiner's] death in 1971. These letters are saved in Porat's house in three thick folders. Some of it is discussin about general matters, but Weiner would usually would get Porat's games and comment on them. Occassionally a certain subject would be discussed for a few letters. These letters greatly influenced Porat: 'Neither once nor twice I realize where I've gone wrong.'"

Porat was an International Master when there were less than 200 IMs in the world. By today's standards he would have been at least a Grandmaster, probably a rather strong one. Mr. Weiner is a unique, or at least very rare, case of a chess enthusiast who hasn't played in a single tournament--and yet has a Grandmaster's understanding of the game.

One of the uneforseen downsides of the chess programs' revolution is that, today, it is hard to tell by someone's analysis how good a player they are. Everybody can use Fritz! Back then, however, when someone gave you grandmaster-level analysis of your games, you could be sure they really knew chess.
פורסם על ידי Avital Pilpel ב- 6:06 AM No comments: