Image credit: www.flickr.com. OK, I'll stop here, or else this blog will have nothing but such images.
פורסם על ידי Avital Pilpel ב- 10:04 PM No comments:

Israel and the Arab World over the Chess Board 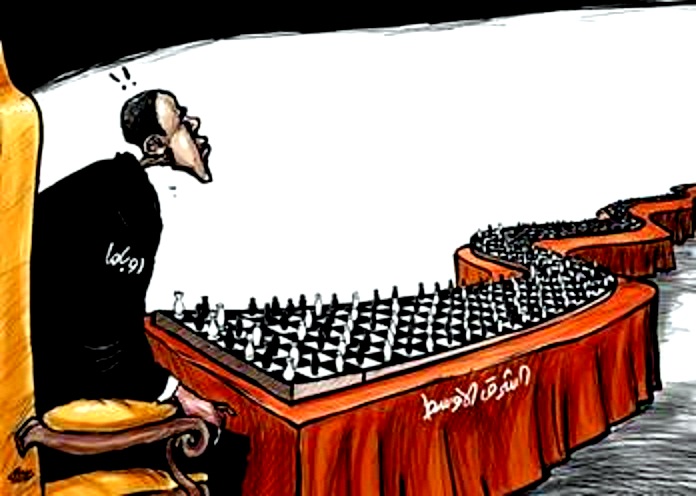 Samuel Sloan, a New York chess player, posted a story about the game between the Israeli player, Shmuel Nagar and an UAE player, Isak Al Mulla, in a tournament in Thessaloniki. According to the report in the link:

After he had achieved a winning position in the opening against a player named Nagar, Al Mulla casually leaned over and asked his opponent where he was from. He was shocked when his opponent said that he was from Israel.

The United Arab Emirates is one of the many Arab countries which is officially boycotting Israel. For this reason, Al Mulla immediately reported this situation to the head of his delegation, Mr. Awad Ali.

Under normal circumstances, a player from the UAE cannot play an official chess game against anyone from Israel. However, Al Mulla contended that now that the game was in progress and indeed he had achieved a winning position, there was no point in forfeiting the game now. Mr. Awad overruled him, stating that since, when the game started, nobody had any reason to know that the opponent was from Israel, but now they had become aware of this fact, there was no choice but to terminate the game now. Accordingly, Mr. Awad stopped the clock and the game was forfeited.

This report sounds fishy. Would not a player who is intent on not playing an Israeli ask a player with an obviously Jewish name such a 'Shmuel' if he's an Israeli before starting the game? Since when do players 'lean over and casually inquire' where the other player is form in the middle of a tournament game (or for that matter, speak to the opponent at all)? And while, as is well known, anything can happen over the chess board, is it really likely that a UAE player would achieve 'a winning position in the opening' in the opening moves against an Israeli player when, in the 1988 Olympiad held concurrently, Israel came out 7th -- and the UAE, 68th?

Mr. Nagar, in an interview, filled me in with the accurate details. Saying nothing about the position on the board except that the game was in the opening (presumably neither side was winning), he said that, as both of them concentrated on their game, they were in for a rude surprise:

Suddenly, three thugs come into the room and drag him [Nagar's opponent] out of the room by force! I met him in the Olympiad later that day, and he told me, 'You see, Mr. Nagar, we players get along, it's the politicians who don't allow us to.'

This version sounds more believable. But one would like to see the game score -- I found no such game in my Chessbase 9.0 database of almost three million games.

In one sense, all chess players are impostors: I am yet to meet a player, of whatever strength, who isn't convinced his "real" understanding of chess is such that he is grossly underrated.

Some chess authors, who shall remain nameless, are impostors in the sense of claiming to be "masters" or "leading masters" in their numerous books, when in reality they are at best mediocre -- which is why they are very careful to write only for beginners, who lack the ability to discern the author's lack of scholarship and skill.

More specifically, there have been cases of chess impostors, people who know nothing of the game pretending to be chess masters, although they are (naturally) easily exposed once they begin to play. The most famous -- and amusing -- case is a fictional one: that of Ostrap Bender, from the classic Russian novel The Twelve Chairs.

Bender, pretending to be the a great champion, is confident before his simultaneous exhibition, since 'he knows that the first move, 1. e4, will not present any problems'. Mikhail Tal, with characteristic humor, "explained" Fischer's preference for 1. e4 as White as his deference to 'O. Bender's recognized move'. (The Life and Games of Mikhail Tal, commenting on Fischer-Tal, candidates' tournament, Bled 1959.)

A famous case of a "reverse" impostor, a genuine chess master playing chess under an assumed name, is that of Savielly Tarkatower playing chess, during WWII, as 'Second Lieutenant G. Cartier'. For his usual throughout analysis of the incident, see Edward Winter's Chess Notes no. 5140.

I wonder, however, if there ever was a case like that of Yoram Tamari. In an interview, he noted that, in 1955, as a schoolboy, he wanted to play in the second league chess team, Yoav-Ashkelon, in Israel, but for some reason did not want others to find out about it. So he entered the team under the assumed name of Shlomo Bogdansky -- his arts and crafts high school teacher, who had nothing to do with chess. The secret was revealed when he won all of his games, making a clean score of 7/7.

Perhaps he should have lost, or at least drawn, a game on purpose, to make sure.
פורסם על ידי Avital Pilpel ב- 11:56 AM No comments:

Chess is found in the Oddest Places

Nothing to do with Jewish chess in particular, but the blog PrimatePoetics! has quite a bit about chess fiction (and chess generally), from classic works to pulps.
פורסם על ידי Avital Pilpel ב- 11:48 AM No comments:

A translation from Amnon Dankner's article, today (23/4/2010), p. 26 of Maariv's (a large Israeli daily) weekend supplement, about how was forced to pass the matriculation exam in mathematics:

Nothing worked, until he [Danker's father] noted that, since there's a connection between chess and mathematics, perhaps he should look in the back room of the "Orient" coffee house. This was the place where our city's chess players would sit and play and shout and insult each other, and of all of them, Leon Tefilinski caught his eye. A rough man, with a red nose and thick glasses, a gravel-like voice, smoking cigarettes and with an eternal wool shawl around his neck.

My father noted two qualities. First: the man was a natural pedagogue. Every time his opponent made some monumental mistake, Tefilinski would strike him in the arm, shouting 'gurnisht! Schmuck!' and explain to him how he went wrong. Second: when he would wait for his opponent to move -- which sometimes took a while -- he would read Zbivannia Mathematica -- mathematical riddles.

Dankner's father employed him as his son's math teacher, and he succeeded in what no other teacher did -- scare him to death with tales of how he killed Germans in Stalingrad, and how doing the same to him if he makes mistakes would not be difficult (Dankner obviously didn't take this threat literally, but fearing the teacher doesn't necessarily come from literal acceptance of the teacher's threats.)

But this was not the end of the story. When Dankner's father died three years later, he was asked to pay a large amount of property tax. To his surprise, he met Tefilinski in the tax office by chance:

To tell the truth, at the moment, needing a comforting hand, Mr. Tefilinski was not the first, or for that matter the last, man I would choose to meet. But he insisted, looked at the papers in my hand and looked at them... He went into a small room and came out with a small ruler. He went into the [taxman's] office without knocking... went to the table of the fearsome manager of property tax in Jerusalem... shouting 'you did it all wrong here, yob tvou mat! ... 'stupid Russian peasants do better math than you!' ... erasing the numbers from the form, writing other numbers, and telling [the manager] to sign.

Which he did; since, as it turns out, Teflinksi was the living soul, the human computer of the property tax office in Jerusalem.

Dankner concludes that employing Teflinski as a math teacher

[W]as the best investment the Dankner family ever made. It was a good, indeed excellent thing, to study mathematics, Q.E.D. 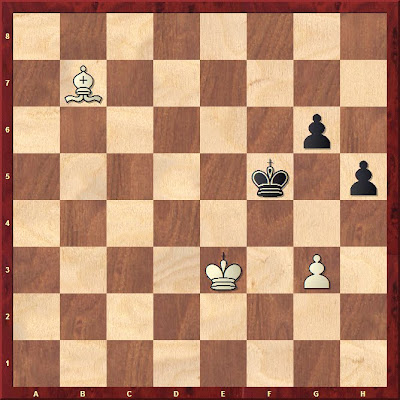 The above is the first endgame study published in Palestine. It is by Dr. Jehuda Greungrad, published in the Palestine Post [later the Jerusalem Post], May 11, 1945.

As noted on pp. 24-35 of The Chess Problem Tourney in Memory of Dr. Jehuda Greungrad (Ed. Uri Avner), not only was this the first such study (as opposed to a problem, or a study by a foreign composer) published in Palestine, it is quite a good one.

There are two curious points about this study noted in Avner's book:

1). Greungrad was not a study composer, but a problemist. This is his only study.

2). The study had to wait 43 (!) years to be judged, in the Israeli Retrospective Tournament of studies composed 1945-1962, in 1988. The judge, Yehuda Hoch (born two years after this study was composed...) noted it is 'a very accurate study, studded with tries. In spite of its technical character, it creates a pleasant and aesthetic impression.'

(Analysis and punctuation by Uri Avner, pp. 24-25 of above book; my translation from the Hebrew. Highlight below to see.)

To avoid the "wrong color bishop" ending, White must prevent the passage of the g pawn to the h file.

An illustrative example of the rare type of study where the [only - A.P.] first move is the point.

Chess is often used as a political metaphor, so it is not surprising it is sometimes used for antisemitic purposes.

Above is a WWII-era Italian postcard (actually a "rip-off" of a similar German postcard) which has the Italians and Germans winning the war against the British king, as Jewish plutocrats on the sidelines shed tears.
פורסם על ידי Avital Pilpel ב- 12:59 PM No comments:

Above, an old drawing, "Chess Players" (Schachspieler) by the 19th century Jewish artist Isidor Kaufmann. A world that has vanished.