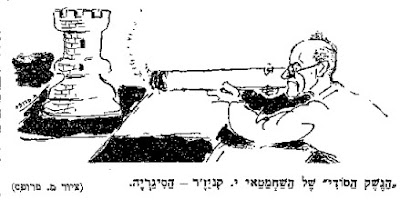 The above caricature of Kniazer, by M. Props [ph. spelling], appeared in Davar, Feb. 14th, 1947, p. 2  That is, it appeared on the 14th page of Dvar Ha'shavuah, the weekly weekend supplement of Davar, following the ten-page daily newspaper. The title is, "Kniazer's secret weapon: the cigarette." Indeed, Kniazer (like many chess players at the time, e.g. Aloni) was a chain smoker who was rarely seen without a cigarette while playing.
פורסם על ידי Avital Pilpel ב- 8:57 AM No comments:

Doing Their Bit, pt. II - and Chess on the Radio.

We have noted in this blog before that Israeli players did their bit to help the country in the wars. Our Austrian correspondent, Herbert Halsegger, notes that their effort was reported also abroad, in this case, in the Wiener Schach-Zeitung. Based on the similarities in the scores, these may well be the same games reported by Shaul Hon in sept. 1948 (see the link just given), but this is not certain.

The article also mentions that Israeli radio has a weekly radio broadcast, again a point mention by Hon at the time, as mentioned previously in this blog. Apparently, chess was beginning to be noticed abroad.