FIDE president Kirsan Ilyumzhinov, a leading light in the field of agricultural research. (Photo from wikipedia).

This has nothing to do with Jews, but, looking at chess history, one sees that FIDE used to be a serious body. To show the depths to which FIDE had fallen, I reproduce the following item from its official web site, verbatim.

On December 25, FIDE President, Head of Republic of Kalmykia Kirsan Ilyumzhinov took part in a solemn ceremony of prizegiving in the field of science and technology of the Government of Russian Federation. Among the prizewinners - Kirsan Ilyumzhinov. Head of Republic of Kalmykia awarded to the prize as the head of the creative team which developed and implemented sustainable production system of obtaining beef through Russian breeds of beef cattle.

Together with the Head of Kalmykia the Prize of the Government of Russian Federation awarded to other members of the creative team: Candidate of Veterinary Sciences, General Director of the open corporation "Plant Breeding of A. Chapchaeva" Ivan Erendzhenov, doctor of agricultural sciences, professor, pro-rector of the state educational institution of higher vocational education "Kalmyk State University" Anatoly Arilov, academician of Russian Academy of Agricultural Sciences, Deputy Director of the state scientific institution "All-Russia Research Institute of Animal Russia Academy of Agricultural Sciences" Nikolai Strekozov etc.

As Edward Winter said, 'How anybody, or any body, can write in such a way is beyond comprehension'.
פורסם על ידי Avital Pilpel ב- 5:31 AM No comments:

Rubinstein in Palestine and Israel

Akiba Rubinstein's involvement with chess in Palestine has been quite intensive. The very first game printed in the very first chess column ever to come out in Palestine -- in, of all places, the Palestine News, which, as its masthead declares, was 'The weekly newspaper of the Egyptian Expeditionary Force of the British army in occupied enemy territory', published 'at G.H.Q. [General Headquarters - A.P.], First Echelon, Palestine' -- was (on May 7th, 1918) Rubinstein’s “polish immortal” game against Rotlewi in Łódź, 1907, annotated by Edward Lasker. There is no need to repeat it here.

Five years later, in September 1923, the Lasker chess club in Jersualem scored another first: the publication of Ha’shachmat, Yarchon Lehovevey Ha’shach Be’eretz-israel U’be’hutz-La’aretz [Chess: A Monthly for Chess Enthusiasts in Palestine and Abroad], 'published by the Jerusalem chess club "Emanuel Lasker"'. It adds on the first issue’s first page that 'great Jewish masters abroad promised their regular contribution'. The magazine's hopes were dashed -- only four (or three, the first being a double issue) issues appeared, in Sept. 1923 (Vol. 1 No. 1-2), June 1924 (Vol. 1 No. 3) and Sept. 1924 (Vol. 1 No. 4). However, Rubinstein -- one of the masters who promised to contribute -- had published 'Al Dvar Ha’tchalat Ha’partia' [About the Opening] in Ha’shachmat, Vol. 1 No. 3 (June 1924), p. 34.

The article itself is very basic: Rubinstein advises to control the center, to emphasize development over material, and so on. It is so basic, in fact, that the editors add the note that 'this material is probably well known to many of our readers, but beginners will find it very useful'—a rather dubious claim for a one-page article containing not a single opening or variation but only general principles, including some ('we must not hesitate to sacrifice if only we can interfere with the opponent’s regular development') that are bound to be misapplied by beginners.

In addition, the Rubinstein chess club, founded in the 1920s, was of course named in his honor. (The two other most famous clubs in Israel or Palestine were also named after Jewish chess masters -- the Reti club and the Emanuel Lasker club.)

Nevertheless, it is both the very first article written especially for a Palestinian chess magazine (or chess column) by any leading master, and also the very first article written by a leading master for such a magazine in Hebrew. The editors emphasize that the article is not a translation, but that it is presented 'as originally written' by Rubinstein in his (excellent, if ‘old-fashioned’) Hebrew, a legacy of his early religious education.

Adds Moshe Czerniak in his book, Toldot Ha'sachmat Me'Reshito ve'ad Yameyni [The History of Chess from its Beginning to Our Day] (Mizrachi Books, Printed by Mofet Press:Tel Aviv, 1963), p. 57:


When Rubinstein was asked to contribute a few words to the publication, he was told that, to make things easier for him, he can write in any language he wants. Rubinstein replied, innocently: 'And what makes you think I can't write in Hebrew?'.

In the last issue of Ha'shachmat (Vol. 1 no. 4, p.65) the editor, Aryeh Leob Mohilever, notes further successes in corralling foreign masters to contribute: five more original problems were received from Speiser, (making a total of 13); Rubinstein is sending a follow-up article, 'On the Middlegame'; and Mieses will send an unspecified 'chess contribution'. Unfortunately, due to the magazine folding, none of these appeared.

The next step was Rubinstein appearing 'in the flesh'. In April-May 1931, Rubinstein visited Palestine and 'gave simultaneous displays' (Czerniak, Ibid.). Both Czerniak and Eliyahu Fasher, in Shachmet le'Hana'atcha [Chess for your Enjoyment] (2nd ed., Cabri 1980, p. 178) claim the visit was in 1929 or in 'the late 20s', respectively, probably by mistake. Fasher adds (Ibid) that it was the excitement over Rubinstein's arrival that got him interested in chess in the first place!

A photograph of Rubinstein playing with Haim Nachman Biyalik, the famous poet, in the 24/5/1931 simultaneous display in Tel Aviv here, and two games are here and here. Note that I have found the original publication the second game (a loss by Rubinstein), added the original punctuations and annotations, and corrected some mistakes in the game score.

In an additional report, Davar, on Friday,24/4/31, said (Bolding of first line is sic, my comments in brackets. Spelling of names -- except Rubinstein's, of course -- is phonetic):


Haifa [Mandatory Palestine]. Akiba Rubinstein's Simultaneous Display. On Wednesday night [22/4/31] the simultaneous display of chess master Akiba Rubinstein was conducted in the Technion's hall against 61 51 [corrected 30/6/2012] opponents. Mr. G. Levin addressed the guest in the name of the community's governing committee. The game lasted from 9 P.M. to 5:30 A.M. Results: five won, eight drew. The winners: the brothers Ne'eman from Bat-Galim (14 and 18 years old), Seprizer, Weil, and Aharoni (from Zichron Ya'akov).

I am not aware of any other simultaneous display that took place in such odd hours, nor of a two-brother 'team' both winning in a simultaneous display against a leading master. It is indicative of the popularity of chess at the time that this report was printed, not in the chess column, but in the regular 'current events' section.. 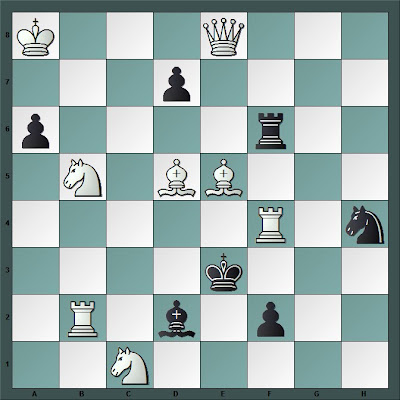 To illustrate the advancement in the field of chess problems in Israel and Palestine since its beginnings in the late 1920s, the following problem will do well. As the judges said:

In a light and accurate construction the composer manages to combine two self-blocks, three interferences, and a nice key move that allows a cross-check.

To add to this, this was done by a composer who lived in a small kibbutz, Alumot, near the sea of the Galilee -- far from any chess club -- in the lean years of WWII, which had just ended. For the solution, highlight the text below.

P.S. The font size is driving me insane again... sorry.

The third meeting between them was in the 1935 Warsaw Olympiad. Porat was 1st board for Palestine, Flohr the 1st board for Czechoslovakia. When the game was adjourned Flohr had a slight advantage, and Porat says: "We resumed in the afternoon, and when I got out of my chair for a break I saw the world champion Alekhine, surrounded by a few masters, watching my game. When I asked what has happened, I was told that Flohr, remembering his two previous defeats against me, bet significant sums that he will win [with various players], while Alekhine was one of those who took the bet and had just express his view, that I have good drawing chances. A few moves later Flohr was convinced to agree to a draw."

Is there any other information about this incident of betting, or the "substantial sums" involved?
פורסם על ידי Avital Pilpel ב- 10:27 AM No comments:

The following is, the Palestine Post says, a game by Akiba Rubinstein (White) against I. Greinetz, played in a simultaneous exhibition in Tel Aviv, 1931, and given both by the Palestine Post, Aug. 12, 1949, and -- originally -- in Menachem Mendel Marmorosh's chess column in Davar, 29.5.1931.

Annotation and punctuation are by Marmorosh (The Palestine Post simply retained some of them and dropped the rest). What's more, the original version of this post had a nonsensical game score, which was corrected. I changed Marmorosh's '(?)' to '?!' (dubious) and (!) to '!?' (interesting), as was probably his intention.

The Palestine Post either mistakes Marmorosh's '(!)' evaluation of 18. f5 for a "regular" exclamation point, or disagrees with him about the move's value. I kept Marmorosh's evaluation. 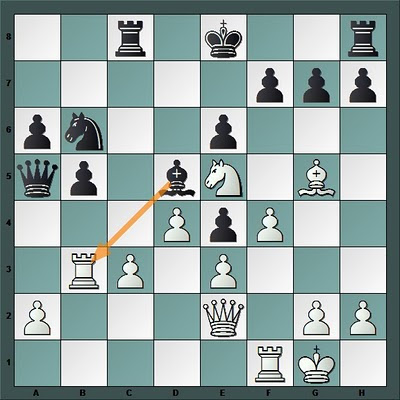 Solves the difficulties. Accepting the sacrifice would have given White many possibilities. 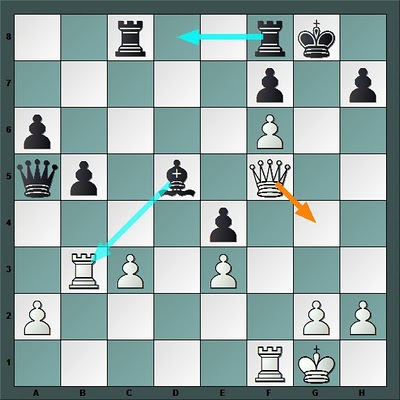 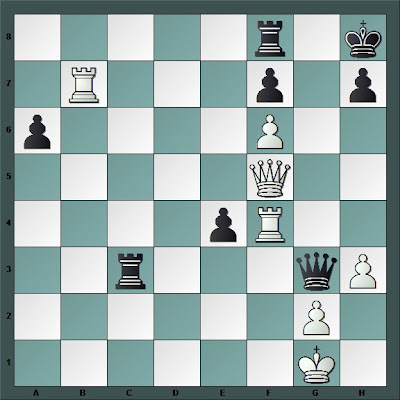 and mates in three moves.