Losing to the Smoking Idiot

There are many tales about Aaron (or Aron) Nimzowitsch. One is that he, a non-smoker, complained to an arbiter about his opponent taking out a cigar -- not because he was smoking, but because he was threatening to smoke, 'and the threat is stronger than the execution'. Another is that, after losing a game to Saemisch in a tournament in Berlin, which cost him the first prize, he angrily exclaimed, 'why must I lose to this idiot?'.

The first story, as Edward Winter and others had consistently pointed out, is almost certainly an invention. But the second story is probably true... and there is also both a smoking and an Israeli / Palestinian connection!

The story, first of all, was told to Hans Kmoch by the 'idiot' himself, as Kmoch retells in Grandmasters I have Known -- so we have an actual, indeed the best possible, witness to the event, and it is not one of the infamous 'once' tall tales, indeed often libels, that so disfigure chess history, about how player X 'once' did or said something outrageous.

But what was the occasion? Kmoch does not say. Wilfried Krebbers, the author (or creator) of the excellent nimzowitsch.net site, points out that was a likely a Blitz tournament by the Berlin Chess Association, which took place on Aug. 9th, 1928, in the Koening Chess Cafe, as reported in the Schachwart, Sept. 1928, pp. 168-169.

The Israeli/Palestinian connection? Israel Barav, the Israeli player and organizer, then Rabinovich ('Rabinowitsch' in the German spelling) and a student in Berlin, played in the same tournament!

He played in the smoking section -- coming in a very respectable 4th place, after three well-known players: Saemisch himself, Ahues, and Kagan (not, of course, to be confused with the Israeli player Shimon Kagan). We thank Ami Barav, his son, for bringing this tournament, as well as its connection to both Barav and the 'losing to the idiot' incident, to our attention. For more on Israel Barav's chess achievements, see his memorial web site.
פורסם על ידי Avital Pilpel ב- 11:32 AM No comments:

A frequent correspondent to this blog notified us of an interesting article by the late Zvi Bar-Shira about the Siegen (1970) Olympiad. Bar-Shira notes, among other things (we have only used a small cutting of the entire article) that Penrose had blundered a piece to an opponent from Andorra (Olaf Ulvestad according to the databases), fainting at the board, and being sent back to England.

Bar-Shira also adds that Ernö (Aharon) Gereben -- 'an Hungarian Jew who didn't manage to find himself in Israel and emigrated to Switzerland' -- was a victim of 'an unpleasant event. His Indonesian opponent, Haji Ardiansyah (full name from Chessbase's 2005 'Big Database'), had 'smugly declared a stalemate', and both signed the scoresheet. Only after the game both saw it was not a stalemate, but Gereben's appeal of the score was rejected.

The databases bear this story out. Acording to Chessbase's database, they reached the following position: 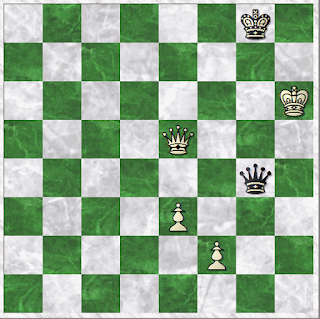 Ardiansyah (Black) played 71... Qg6+, obviously believing that after the (forced) 72. KxQ Black is stalemated. In fact Black is not (72... Kf8), but the game is recorded in the databases as a draw after Black's 71st move, meaning White indeed accepted Black's claim.

This is somewhat comforting to players on my level. If this sort of fire can consume, as the Talmud says, the Cedars of the Lebanon (or of Siegen, at any rate), the moss on the wall, like ourselves, can feel better about our own lapses.
פורסם על ידי Avital Pilpel ב- 8:06 AM 2 comments:

A frequent corespondent to this blog has found a picture of the grave, in the Holon cemetary, of Moshe Blass -- or, as is written on the tombstone, 'Moshe Abba Blass, son of Itzhak Meir'.
פורסם על ידי Avital Pilpel ב- 7:29 AM No comments:

This is not a political blog, and we make it an explicit point not to go into political issues as such. We note that terrorism, now constantly in the news, is not a new concern -- nor is its connection to chess.

In the above article, by Israeli Eshel, the head of the Israeli Chess Federation, justifies the ICF's decision to send men and women's teams to Skopje, since there were serious concerns about terrorism, in the wake of the attack in the Munich Olympics which killed eleven Israeli athletes.

Eshel notes that the decision was made to participate, but only after serious discussion, an 'clear-cut promise' from the Yugoslav organizers to protect the participants, which included also making special arrangements for the Israeli team (Olimpbase too notes there were, in general, 'extraordinary security arrangements' made due to Munich's shadow). He also notes that the ICF as well as the participants cooperated fully with the Israeli security authorities.

The Olympiad, we now know, passed without any (security) incidents, but it was not an easy decision to make.
פורסם על ידי Avital Pilpel ב- 7:19 AM No comments:

In the Beginning: "Al Ha'Mishmar"

Chess columns usually start with games and problems together -- usually, 'game 1' and 'problem 1' (or else, "[endgame] study 1"). In Al Ha'Mishmar, the chess column was different: it started in that newspaper, in effect, as a problemist's column, with two problems, on Aug. 23rd, 1945 (p. 3). The first game (from the Moscow championship, 1945) was published only two weeks later, as seen above.

The  Sept. 6th column (below) is also interesting for explaining the history of the column, noting it is in effect a problemist's column, which "migrated" to Al Ha'Mishmar from the Palestine Post, where it was established five months previously, and had found an audience of 'close to sixty solvers'.

As was typical at the time, the tone was explicitly Zionist: 'this is a number no large publication abroad would have been ashamed of... an international [composing] tournament was announced, which will no doubt help publicize our nation in the world'.

In addition, it also notes founding of the Palestinian Problemists' Association, in the Emanuel Lasker club, Tel Aviv, on Sept. 15th.