Just one example from Victor Keats' book will be seen in his article concerning the Alphonso manuscript, named after Alphonso X, 'the wise' -- that is, notes Keats, the relatively tolerant because he employed Jewish and Muslim scholars.

Not only does Keats give, of course, credit to previous scholars of history in general (Graetz's famous Popular History of the Jews, for example) and chess history in particular (Murray and others) but connected the creation of the manuscript to Alphonso's use of Jewish scholars in his court for other purposes, the relationship between chess as seen in the manuscript and its Arabic sources, and much more.

This is just one example. The book discusses dozens of manuscripts (if not more) with great rigor, but also with an engaging writing style. Keats notes, for instance, that Alphonso 'the wise' was the opposite of his father, Ferdinand 'the saint' -- which meant religious intolerance -- without trying to make him seem as a modern liberal. He notes he steered a fine line between prosecuting the Jews and others so as to not arouse Rome's ire, and being tolerant enough to exploit their talent.


This blog is not in the habit of recommending books (it is not a book review forum), but we have just received, as a gift, our own copy of Victor Keats' Chess in Jewish History and Hebrew Literature, a superb book, and -- as the screen capture from the publisher web site's makes clear -- is now offered in a significant sale. A good opportunity for those who wish to find what is surely the most detailed book on the subject.
פורסם על ידי Avital Pilpel ב- 2:13 AM No comments:


We note here that the memorial web site for Israel Barav (Rabinovich) had been updated again, esp. with his own account of his time in Germany (see the 'chess biography' section of the web site). The web site is regularly update with more material, esp. from his son, Ami Barav.
פורסם על ידי Avital Pilpel ב- 1:50 AM No comments:


The world of chess knows many chess players who were artists -- Marcel Duchamp being surely the best-known and, probably, also the best in both categories (see in the article the 'transition from art to chess' section in particular). But there is also the famous art forger Leonardus Nardus and many others. But how many female players were artists (or vice versa)?

One example from Israel, from p. 102 of the book about the Israeli 1961/62 championship mentioned in the previous post, is Anna Frank -- who is seen here, both as she is seen by the camera during play (right, of course) and in a self-portrait.
פורסם על ידי Avital Pilpel ב- 6:01 AM No comments:

The report notes that Gevenda, a previous Israeli champion (in 1959, according to Wikipedia), did especially well, and that Friedman was declare the champion after winning a playoff with Haimovich 3-0. It notes that if Gevenda had not 'written a faulty sealed move' in her game against Haimovich, the result may well have been different. The report shows some disappointment of the relative low quality of the games in the women's championship: 'if the women's championship is not to be a mere formality, we need to seriously develop this branch of chess'.

Note: the English spelling of all names followed by 'ph.' is phonetic: as Gaige seems not to have any of the players listed in his Chess Personalia, we have transliterated from the Hebrew. When the book does spell the names in English, we followed its spelling. The first names -- not appearing in this crosstable -- are also as listed in the book. Below, is a photo of the game Haimovich (right) - Margalit, from p. 102: 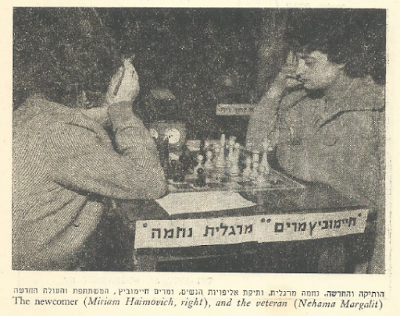 Chess in the Knesset

In the Israeli parliament, on 14/11/2016, there was a simultaneous display against GMs Sofia Polgar and Avital Borochovsky (Israel's youngest GM), reported Ynet; the picture is from the link, showing Uzi Dayan (right) and Ze'ev Elkin (left). In addition to the MPs and other VIPs, notes Ynet, there were 30 children that were invited by the Israeli Chess Federation.

Elkin said how he was a chess fan from childhood, and that this helped him all of his life, even when he studied mathematics; he added that the different between chess and politics is that in the latter, the opponent can steal your pieces or overturn the board... Dayan added that it is a matter of funding, and if there was more money for chess Israel's achievements would be higher.
פורסם על ידי Avital Pilpel ב- 5:06 AM No comments:


As the Israeli Chess Federation's web site reports (Hebrew), GM Yair Kraidman (left in the photo) had just played and achieved a very respectable 9th place in a large international tournament in Malta.

This marks his 66th year playing in serious events, starting from the very first Israeli junior championship, 1950, where he shared 1st place with Raafi Persitz (3.5/6), Persitz being declared the winner on the tiebreak, as Kraidman himself notes in an interview on the ICF's web site (Hebrew).

What is more, It is easy to find in numerous online databases that Kraidman has been playing regularly in international events, and this is not a one-off return, but a continuation of a constantly active career. The article also notes, inter alia, that this year marks Kraidman's 40th years as a GM. While this is not a record of chess activity per se, of course, it is quite noteworthy. Congratulation to Kraidman for his longevity!

The interview, for Hebrew speakers, is worth reading in its entirety, especially in its comparisons of Israeli chess (and chess in general) today as opposed to in the past. For example, he notes that in the past chess - even in the highest levels - was much more "gentlemany". For example, when Kraidman was playing in Manila (Philippines) in an all-GM tournament right after getting the GM title, his opponent, Petrosian overslept, and came an hour late.

Kraidman could have demanded a technical victory, but he didn't want to miss the chance to play the (ex) world champion - so he played and lost. Today, he notes, this will simply not be done: players would just demand the technical victory without playing as a matter of course.

We add that losing is, of course, never fun - but it does not seem that Kraidman is too sorry for having actually played Petrosian in a serious tournament, not an opportunity that comes every day, even if he lost. By chance, a colleague of ours, a strong but not a top-flight player, had happened to play both Mangus Carlsen online in two games, and John Nunn in a tournament. He lost all three games, unsurprisingly - but is glad he had the experience.
פורסם על ידי Avital Pilpel ב- 4:42 AM No comments:

It is not at all surprising that a qualifying tournament in a city's championship is handwritten and not published anywhere, but still the following case seems one where the players were strong, yet the crosstable was not known.

In the Winter of 1931/1932, the Berlin Chess Association (Schachgesellschaft) organized a winter tournament. Israel Barav (nee Rabinovich / Rabinowitsch) did not play in the final -- and his son, Ami Barav, notified me he had always assumed his father did not qualify from the preliminary tournament.

Recently, however, chess researchers Alan McGowan had notified Ami Barav that his father had actually won his section -- as he, McGowan, found in Berthold Koch's notebooks -- in particular, drawing with Saemisch. winning against Helling, Moser, and Elstner. The real reason Barav did not play is simpler: McGowan found out (in the Deutsche Schachzeitung of March 1932, p. 68) that Barav had left the country by the finals' time.

Sometimes, it takes 80 years to set the historical record straight, even on such a matter. For more details on Barav's career, including many games, see Israel Barav's much-updated memorial web site.
פורסם על ידי Avital Pilpel ב- 10:48 AM No comments: