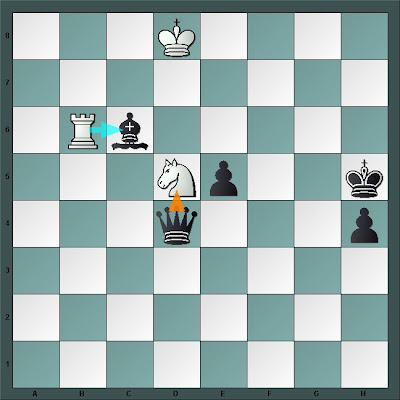 Some lighter fare this time: an amusing game between Moshe Czerniak (white) and Menachem Kalir (Israeli Championship, 1970) -- a rather extreme case of mutual pawn storms. 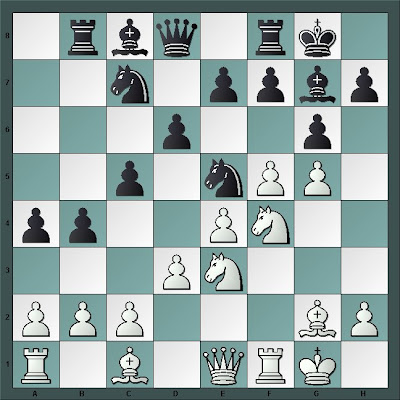 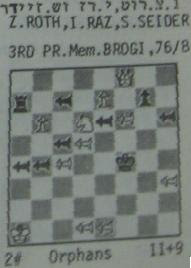 We have, so far, talked about Israeli chess and orthodox Israeli problemists. What was the situation of unorthodox chess in Israel (or Palestine) in the past?

It seems -- this conclusion being rather tentative! -- that the fairy chess folks had suffered from, alas, the same problem many other areas in Israel suffer: to wit, the 'brain drain'. Talented Israelies preferred to publish their problems abroad, where recognition and awards were higher, than to publish them in Israeli magazines.

A typical example is given in Ha'Problemai [The Problemist], the Israeli Problemists' Association's bulletin, of January 1980. On the first page (above) we see a very interesting and original fairy problem -- using no less than 12(!) "orphans" (sideway pawns in the diagram) -- by Zvi Roth, I. Raz, and Shlomo Seider (the first names of the first and last composer I got, as so often, from Jeremy Gaige's indispensible Chess Personalia: A Biobibliograpy [1987]). This problem was good enough to win the third prize in the [Giuseppe] Brogi (1900-1976) memorial tournament (1976-1978) in Italy. (See solution below, adapted from pp. 1-2 of Haproblemai, January 1980).

But what happens in Israel, in the meantime -- in fact, in the exact same period? In the same issue of Haproblemai (pp. 22-23), in 'Fairy Problem Report, 1976-1978', the very same Zvi Roth notes that fairy problems in Israel historically include only (a) Maxinummer selfmates, (b) retrograde analysis problem, and (c) series-movers, and that since, for historical reasons, the first type is lumped together with "regular" selfmates and the second (in which, I -- A.P. -- must add, Israeli problemists reached a very high degree, as can be seen from this blog) is considered separately from "real" fairy chess, the problems he had left to judge were only series-movers. What's more, those were of 'very poor quality'. He adds:

Where are the fairy pieces like the grasshopper, the nightrider, the neutral pieces, and so on -- which are well known in the entire world for decades? Where are the special boards? The special condition problems, such as "circe" problems? And, in general, where is the Israeli problemists' wild, creative imagination?

The brain drain, it seems, is not limited to the high-tech world.

Solution to the problem (highlight the text below):

Sigmund Freud, the father of psychoanalysis, is a controvertial figure. Some argue that psychoanalysis itself is merely a pseudoscience, on par with phrenology or homeopathy. That as it may be, Freud himself had warned that "wild" psychoanalysis -- applying it glibly and wantonly to fields where it does not apply -- is silly and potentially dangerous.

A perfect example of this is seen in the work of the (Jewish) chess player, Reuben Fine. His decision to quit chess for psychoanalysis was called 'a loss for chess and at best a draw for psychoanalysis'. His book, The Psychology of the Chess Player [New York, Dover: 1967] is so bad, it is good.

1). The king is "really" a penis, and therefore the whole game is "really" an attempt at castration, because both players attempt to mate the enemy king. Castling is protecting one's penis from the castrating father (or mother -- see below) because it "hides away" the game's "penis".

2). The queen's power, on the other hand, shows the mother's female power, and players who tend to swap queens early are afraid of women. But what about languages (Hungarian, Arabic) where the piece is not a queen? No matter -- the very fact that it is powerful is enough to symbolize the power of the mother.

3). A blunder is never a blunder, but only a result of a deep-seated, subconscious "masochistic" desire to be punished. A move that makes many threats isn't just a (usually) good move, it shows the deep-seated "agression" of the player. A quiet winning move shows his "sadism".

And so on and so forth. This nonsense would be understandable -- although not excusable -- if the author was merely a lousy psychoanalyst, who did not know much about chess. But Fine was a very strong player; in his heyday (the 1940s) he was a serious candidate for the world championship. How could he, of all people, come to believe -- and write -- such nonsense?

Well, folks, that is what happens when you let Freudean psychoanalysis do away with your common sense. 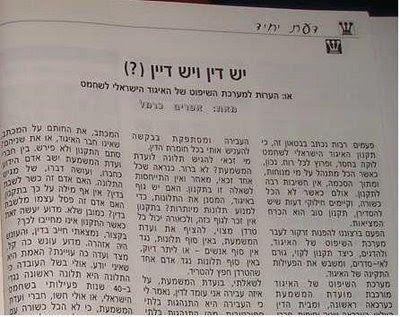 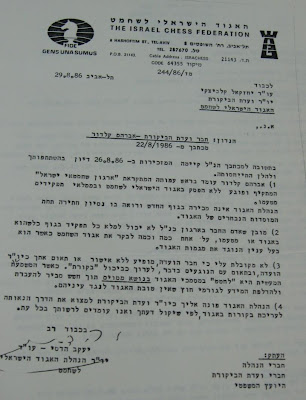 Chess organizations are somewhat notorious for their infights. This fate had also touched Israeli chess. In the 1980s, the Israeli Chess Federation (ICF) had experienced a "insider's revolt", in which certain players and activists (e.g., Almog Burstein, Avraham Kaldor, and Efraim Carmel, among others) fought the ICA over certain matters, and even left the ICA to found a competing organization -- the Israeli Chess Players' Association (ICPA) -- with its own magazine, Shachmat be'Yisrael [Chess in Israel], competing with the ICF's Ha'Sachmat [Chess (lit. 'The Chess')].
As an example of the two sides we can see the above pictures. On the bottom, on ICF stationary, we have a letter from Ya'akov Hadasi, the head of the ICF, to Yehezkel Kalnitzki, the head of the ICF's inspection committee ( va'adat ha'bikoret), explaining the ICF does not recognize the ICPA and that it is unacceptable that Kaldor, an inspection committee member, tries to make an inspection of the ICF's files: 'the real goal of this inspection is to look for a specific subject in the Federation's files... with a serious suspicion that anything found will be passed on... to organizations that do not have the ICF's interests at heart'. (Source: Eliyahu Fasher's files, Yad Tabenkin archives.)
On the other hand, above, we have a (small section) of a long article ('Is there Justice?') by Efraim Carmel, complaining -- among many other things -- that a complaint letter he sent to the president of the ICF (Yossi Hachmi) about the behavior of the VP (Yidael Stepak) had arrived in Stepak's hands, and he -- in retaliation -- decided to try Carmel in the ICF's internal court for 'unsportmanlike behavior'. After citing the unobjective nature of the court's composition and debates, Carmel notes that, after a second appeal he made to the ICF's highest internal court, he was cleared and the higher court had been very critical of the lower courts' actions. (Source: Sachmat be'Yisrael, Vol. 33 No. 1, pp. 28-30, Feb. 1993).
As an historian, it is not my job to decide who is the angel and who is the devil in this debate. It is to discover the facts, using original source material and interviews. After 15 years, it's time for an objective investigation.
פורסם על ידי Avital Pilpel ב- 7:00 AM No comments: