This is the sort of thing that could only happen to chess. Here is a cutting from the news section of the Jewish weekly Ha-Magid (hat tip: Moshe Roytman, our frequent contributor, and -- like most if not all selections from newspapers on this blog -- The Historical Jewish Press web site.)

You know your favorite hobby is not held in high esteem when the following three items appear in succession, by the weekly's correspondent Aharon Tetenboym :


Antisemitism in chess -- or in Russia for that matter -- is nothing new, but here is a nice counter-example. Hatzfira (Warsaw) reported on May 25th, 1891, that Mikhail Chigorin has celebrate his victory over Wilhelm Steinitz (in their well-known "telegraph match", which Chigorin won 2-0), in the St. Petersburg Chess Club. (The club's name, by the way, was literally translated into 19th century Hebrew as 'The Committee House for the Community of those who Play in the Game of Chess'...)

The paper notes that Chigorin proposed a toast to his 'master and guide, the well known master' (as Hatzfia describes him) Szymon Winawer, and, what's more, sent a telegram to him, in Warsaw, notifying him of this. The paper reports he thanked Winawer for 'managing him [Chigorin] and supporting him when he first went out to compete in chess at a time of difficulty and trial'. Hatzfira added that this event was also published in another, non-Jewish Warsaw newspaper (whose name is only given in initials by Hatfira), and adds:


That newspaper's editor did not know, or did not want to know, that the man toasted by the St. Petersburg Chess Club is a Jew. As is well known, Jews are not allowed to be members of that club.

Kudos for Chigorin, who was not a Jew, not only for remembering his Jewish teacher at the moment of his greatest triumph, but also toasting him openly in a "no Jews allowed" chess club.
פורסם על ידי Avital Pilpel ב- 6:27 AM No comments: 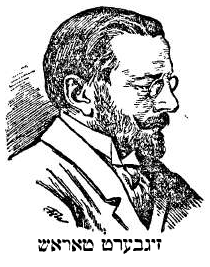 The above picture of Siegbert Tarrasch is probably the first portrait of a chess player printed in a Hebrew-language newspaper, Ha'Melitz, on April 2nd, 1903. It is part of a long article about chess, appropriately titled "What have the Jews been Doing" (ישראל מה פעל), as every player mentioned in it is a Jew. This article was pointed out to me by our frequent correspondent, Moshe Roytman, who usually posts on the excellent Chess-il forum (in Hebrew).

Most of the article deals with Tarrasch's biographical information and chess career. But, alas, the paper already libels Wilhelm Steinitz, claiming that 'poor Steinitz' could not stand his 'humiliation and distress' due to losing the world title (rematch) to Emanuel Lasker in 1896, and therefore 'went insane' and died in 1899 (actually 1900).

It is true that Steinitz was, in fact, hospitalized in a mental hospital in the end of his days, but it is at the very least extremely doubtful that the loss of the world championship to a much younger Lasker was the cause. It is sad to see this myth, which smeared Steinitz's memory every since, has been going on for so long.
פורסם על ידי Avital Pilpel ב- 12:45 PM No comments:

I don't Read, I Just Look at the Pictures


The Argentinian / Israeli chess player, Horacio Volman, has kindly agreed to an interview with me. He and his wife have told me many interesting stories about many chess players they have known (especially Miguel Najdorf and Moshe Czerniak) -- more of which will be posted soon on this blog, I hope.

For the meantime, one "appetizer": Volman pointed out to me that a biography of Najdorf by his daughter, Liliana Najdorf, has been published in Buenos Aires in 1999. Volman told me the book, Najdorf X Najdorf  [Najdorf on Najdorf], is excellent. The book was unfortunately not translated into English, let alone Hebrew; so, not reading Spanish, I was reduced to looking at the pictures (and the high-quality glossy paper...). But, for what it's worth, I agree.

The book has numerous photographs that clearly come from the Najdorfs' private photo albums, showing the family man in a way never seen before, as well as pictures of Najdorf from various sources with personalities ranging from Yehudi Menuchin to Che Guevara. Above is one such photo, of Najdorf, a Jew of course, wearing his skullcap and prayer shawl at the Western Wall, Jerusalem, during a visit to Israel in the 1990s.
פורסם על ידי Avital Pilpel ב- 11:57 AM No comments: 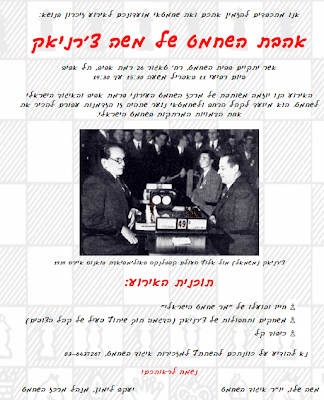 To this blog's fans: on 4/11/2012, there will be a memorial event about Moshe Czerniak's life and love of chess, from 15:30 on, in the Chess House @ 26 Tagore St., Tel Aviv (near Tel Aviv University). All are invited -- especially the young players who have never met the man. The more the merrier! Click on the image for a larger (Hebrew-language) version. NOTE: Invitation says 15:30-19:30, but the event will actually be an hour to an hour and a half.
פורסם על ידי Avital Pilpel ב- 11:28 AM No comments:

The 1932 Championship of Palestine -- High Hopes, Zionism, and other things


As we have seen before, there was no official chess tournament in the 1932 Maccabiah. However, there was supposed to be a championship of Palestine.

The indefatigable Moshe Roytman notes that on 24.2.1932, Doar Hayom published a note [link in Hebrew] similar to (but not the same as) the one later published in Davar on 31.3.1932 which we have already mentioned -- that promises the Levant Fair will include:

1). First of all (in the first paragraph), a tournament including 'ten of the best players in the country'.

2). Also, there will be a 'Palestine vs. foreign countries' match, (without naming who will be on the 'foreign countries' team); a blitz tournament; and finally (on the last day of the fair) simultaneous displays, promising in particular Marmorosh will play vs. 30.

Of all these high hopes, as we discussed before, it is not clear that anything, not even the "real" tournament, actually took place.

On the other hand, while these hopes were disappointed, at least those who came to see the first round of the championship on 9.4.1932 heard Tel Aviv's mayor, Meir Dizengoff, make an interesting speech, linking -- as was the custom of the time -- chess to Zionism. (reported in Davar 10.4.1932, again brought to my attention by Mr. Roytman). Dizengoff noted two similarities:

1). Chess is a symbol of free competition, and a place where every nation has the right to show its creativity and ability, which the Jewish nation is also demanding.

2). In chess, the simple pawn who goes up and climbs, with the goal of becoming a queen when he reaches 'the first rank' (sic). Thus, 'going up and climbing are the main thing' -- that is, emigrating to Palestine is the most important thing.

('Going up' [עליה] and 'climbing' [העפלה] are two Hebrew words for emigration of Jews in particular to Palestine or Israel, the latter usually signifying illegal emigration -- as opposed to emigration of people in general, which is 'hagira' [הגירה]).

This is, presumably, the first time -- and probably the last time -- anybody linked chess terms in particular to emigration.
פורסם על ידי Avital Pilpel ב- 6:53 AM No comments:


How many chess players of significant strength were killed in wars? The death of numerous Jewish players in the holocaust is well known, but what about in actual acts of war? Some non-Jewish players were, of course, killed. Most famously, Vera Menchik was killed (with her sister, also a strong chess player, and her mother) in a V-1 bombing raid in 1944 (according to Wikipedia; some sources claim it was a V-2 attack).

One example is given to me by Almog Burstein. The Jewish player Simon Weil, who played in the 1935 Maccabia, was killed in an Italian bombing raid on Haifa in WWII. Also, after the 1973 war, for example, the Israeli chess magazine had obituaries for chess players who were killed, although (appropriately) without explicitly noting how strong, or weak, they were. This blog had noted some cases of problemists or players who were killed in wars or in terrorist attacks, but are there other cases?
פורסם על ידי Avital Pilpel ב- 6:59 AM No comments:

How to Build a World Champion


I hope I am not jinxing Boris Gelfand here by using the words "world champion", but this is the title (in Hebrew) given to an in-depth investigative report about his life recently published in Calcalist ["The Economist" in Hebrew], an Israeli business journal.

Even if you do not read Hebrew it is worth while visiting the site, for the list of photographs -- including Boris as a child, his living room, the notes of his daily life his father kept, and many others. (For a change, the interview really is in depth, about Gelfand's history, life, friends, trainers, philosophy, etc., and not the oft-repeated collection of cliches about "the genius chess player").  It turns his father trained him from childhood; that he knows the Polgars very well, in particular Sophie (Zsophia) Polgar, who is his neighbor for many years -- although they never played chess as neighbors, only table tennis. Ms. Polgar notes that Boris' father was using, in effect, her own father's methods for "raising geniuses", if more intuitively.
פורסם על ידי Avital Pilpel ב- 4:18 AM No comments:

A chess friend from Munich alerted us to the existence of an article about the Lasker statue we have previously talked about in this blog in the British Chess Magazine, June 1944. Checking the Internet about the matter, it turns out that we have forgotten the indefatigable Edward Winter had already posted the article online, in Chess Notes 5052, as a reply to ... our own letter to him about the subject, which he published in Chess Notes 5035. It is worth noting this again, not because of the bust, but because of the quick and interesting  snapshot it gives of chess in Palestine at the time (see link).

Winter's quote from the BCM mentions various people. Naturally, Weber and Rabinowitz [in the "Lasker statue" post] are the same persons as Veber and Rabinovich in the BCM. Foerder, as mentioned here many times, later changed his name to the Hebrew Porat. In general I prefer the "German" way of spelling ('w' instead of 'v' and 'tz' or 'tsch' instead of 'ch', for example -- that is, Nimzowitsch instead of "Nimzovich") in this blog, since usually it is eastern or central Europe where the players came from.
פורסם על ידי Avital Pilpel ב- 2:27 PM No comments: