More evidence that not everybody plays chess is found in the definitions of this weekend's (24.2.2012) crossword puzzle in 7 Yamim ("7 Days"), Yediot Aharonot's ("Latest News") weekend section. Yediot Aharonot is Israel's largest daily newspaper.

The definition of "1 across" is "In chess: giving up pieces for positional advantage in the opening". Yes, they mean "gambit"-- which, incidentally, is the term used in Hebrew as well, the word having become an international one, like "Zugzwang" and similar chess-related words.

One is reminded of Edward Winter's article, Who was R. J. Buckley?, where he quotes Buckley's quip about one of his games with Bird: "The next game was a Muzio, in which we sacrificed several pieces, emerging with an excellent position, but no men."

Perhaps that's what the crossword writer meant. But I wouldn't bet on it.
פורסם על ידי Avital Pilpel ב- 12:42 PM No comments:

In 1937, Reshevsky won a strong tournament in Kemrey (together with Flohr and Petrovs, before Alekhine, Keres and many other strong players.) As Moshe Roytman notes, on 23.7.37 Marmorosh, Davar's chess editor, wrote a long column about Reshevsky to commemorate this event, including a photograph of him.

Of particular interest is Marmorosh's autobiographical note about when he learned chess and met Reshevsky (circles in red) from that column:


I was then [1916] a 13-year-old boy, whose uncle only recently attempted to teach the beauty of the "royal game". After many appeals I managed to get tickets to the simultaneous game, which caused an incredible interest in all chess circles in Vienna. It is hard to convey the great impression the little boy made in his appearance. Full of pride and confidence, he rushed from board to board without thinking much. His speed of perception [of the positions] was amazing -- and he defeated one player after another. The wonderkind's name, Samuel Reshevsky...

It is not often, I think, that we see chess columnists give, not only a description of a wonderkind in action, but also of how he got them to become fans of the game, as (implicitly) happened in this case.
פורסם על ידי Avital Pilpel ב- 7:23 AM No comments:

Botvinnik -- then and now

The frequent contributor Moshe Roytman notes that I was wrong in claiming Botvinnik was first mentioned in the Israeli (or Palestinian) press in the 1930s. Doar Hayom, in fact, mentions the 17-year-old Botvinnik On 12.3.1928, on p. 2, under the headline Jewish Youth a Chess Master in Russia. The article notes Botvinnik's achievements and claiming he began to play chess at the relatively old age of 11, got first prize in a 1st category tournament at age 14, and now got the "master of the USSR" title in a Moscow tournament. His colleagues, it is noted, consider him a chess genius and expect great things from him.

The same page in Doar Hayom has a note (second headline in the photo above) about "The Nimzowitsch - Alekhine Match", where it is claimed the "Jewish player Nimzowitsch" will play a match against the world champion Alekhine, after he won a tournament in Berlin (the Berlin BSG tournament, where he scored 10/13). As we know things didn't turn out quite that way.

And what about the "now"? The Israeli Museum of the Jewish People has just opened a new exhibition about Jews in sports (no doubt it makes light reading, as the movie Airplane already noted)(*). One of the Jewish heroes of sports who gets his own booth in the exhibition? Mikhail Botvinnik.

(*) Elaine Dickinson: Would you like something to read?
Hanging Lady: Do you have anything light?
Elaine Dickinson: How about this leaflet, "Famous Jewish Sports Legends"?
פורסם על ידי Avital Pilpel ב- 9:51 AM No comments:

Chess and Art, the Continuing Story

Occasionally, I post here about chess in art -- or art in chess. Another example is a contemporary Israeli painter, Boris Dubrov. Below are two pictures from the "Judaica" section of his web site -- "The Chess Game" (top) and "Shah" (bottom). The positions on the boards make sense, as does the design of the chess pieces, and what's more, the bottom right square is white -- which makes one think Mr. Dubrov might be a chess player himself. 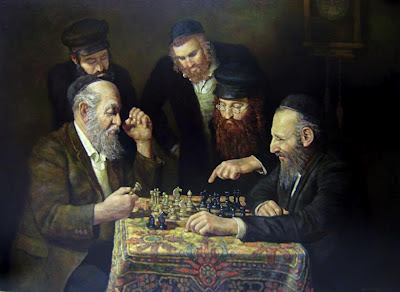 תוויות: art, board set up

Chess in Israel, Early 60s -- What we Can Learn from one Page

Above we see a picture from Itzhak Bar-Ziv's collection. It is the inside title page of the book he won in a youth ("noar", נוער) tournament, back in 1961. A few notes:


1). The book was given, as a joint 2nd-3rd prize, to Itzhak Barzovski. Bar-Ziv (lit. meaning something like "the son of the shining") is the way he changed his name into an Hebrew one. This was quite common for Jews to do in Israel at the time, much like it was common for immigrants to the USA to change their name to an English one.

2). The book has the Israeli Chess Association's Ex Libris on it. Apparently they couldn't afford -- or didn't bother -- to buy the winners of the tournament new books

3). On the other hand, they didn't mind giving the winners books actually signed by the author -- in this case, Samuel "Sammy" Reshevsky (probably during his visit to Israel in 1958).

I find it hard to decide whether the chess association, giving as a prize a used signed book, were being overly generous or overly cheap...