The following game was played in Feb. 1947 by Barav against B. Koch in the Lasker chess club in Tel Aviv. It is from Ami Barav's collection of his father's games, the annotations being both by Barav (Sr.) and by Shahar Gindi. Once more, Barav is out for tactics, looking for the mating attack -- and finding it: 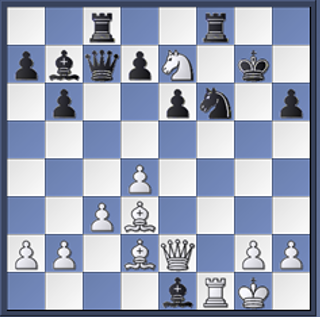 The game is also available in the "games" section of Barav's memorial web site. (Note: one might have to "reload" or "refresh" the pages on the web site to see the latest update).
פורסם על ידי Avital Pilpel ב- 9:29 AM 1 comment:

We already noted in the blog that Moshe Czerniak was mentioned on the cover of Ha'Olam Ha'Ze in 1952. That, however, was the back cover. About a year and a half later, he was there again -- on the front cover, with the title "Chess Master Czerniak -- in the game of kings, the little pawn decides".

The article itself, on pp. 13-14, gives a "standard" outline of chess history -- from the famous legend about its invention in India by a priest to teach the king a lesson about the limits of his power, to the fact that many Jews were champions, to Czerniak's biography. It notes how he studies chess in Paris, where he went to study chemistry, from Alekhine, noting his devotion to spreading and teaching chess in Israel, and his tournament successes.

One point of detail: it notes that Czerniak drew his first game with Capablanca in the 1939 Olympiad. The paper claims that, while Czerniak was a pawn ahead when the game was adjurned, Capablanca analyzed with Alekhine and found a 16-move drawing combination.

In fact, the game only lasted 42 moves so there was no question of a '16 move drawing combination' (as the game score itself makes clear). It was Capablanca who was a pawn ahead, after winning Czerniak's isolated e-pawn in the middle game (17... Nxe4). In any case, it would be extremely unlikely Capablanca would analyze with Alekhine, of all people, given their mutual enmity.

An interesting linguistic point addressed in the article is how to spell 'chess' in Hebrew. This article, and Ha'Olam Ha'Ze's articles about chess in general, deliberately  use the spelling שחמת, claiming the more common spelling שחמט is wrong, since שחמת, means 'the shah [שח, king] is dead [מת]', which is the correct description of the game's purpose, to "kill" the king, as the author explains in a footnote on p. 13.The author is probably wrong on this point. שחמט is preferred today not 'by mistake' but because it means literally 'the king is captured (or more literally, toppled, or defeated - מט).

The article also has (p. 13) a nice photograph of Keres playing Czerniak in the 1952 Helsinki Olympiad, a game eventually drawn in 90 moves after tenacious defense from Keres, a pawn down in a knights' ending: 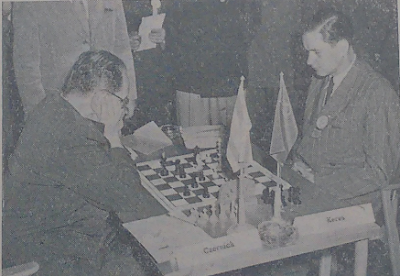