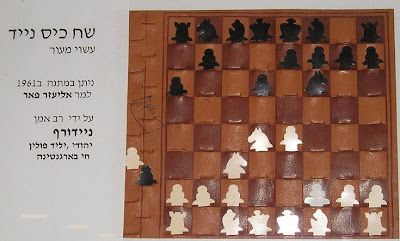 As the Hebrew text in the picture says, the above leather mobile chess set had been given by Miguel Najdorf to Eliezer Pe'er in 1961, presumably during Najdorf's visit to Israel. It now hangs in Beit Ha'Sachmat (the "Chess House") the Israeli Chess Federation's headquarters in 26 Tagor St., Tel Aviv. (Link in Hebrew).

Naturally, the position on the board is the opening position of the Sicilian Defense, Najdorf Variation (5. ... a6).
פורסם על ידי Avital Pilpel ב- 10:15 AM No comments:

...but APART from THAT, Mr. Jungreisz, how was the chess tournament? 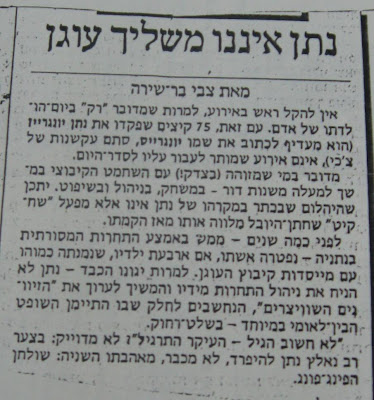 The above is a short article by Zvi Bar-Shira about Nathan Jungreisz's 75th birthday, praising him as the man 'justly identified for over a generation with the Kibbutzim's chess -- as player, organizer, and arbiter'. The article adds:

A few years ago -- in the middle of the traditional Natanya tournament -- his wife passed away. She was the mother of his four children, and, like him, a founding member of kibbutz Ha'Ogen. Despite his deep sorrow -- Nathan didn't relinquish the direction of the tournament, and continued to make the 'Swiss pairings', considered the subject the international arbiter had specialized in, by remote control.

Dubai and Israel -- in Chess 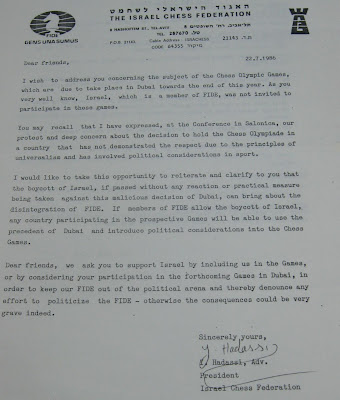 This is by no means a political blog, but it is worth noting that Dubai being up against Israel in the international arena is nothing new. FIDE, despite FIDE's official claim that Gens Una Sumus, had allowed Dubai in 1986 to host the Olympiad, despite the exclusion of Israel.

The history of this event -- how it happened, what Israel tried to do to stop it, what repercussions it had both to FIDE and to the Israeli Chess Federation, how the debacle was used for internal political fights, etc. -- is interesting, and the ICF's archives tell the tale. For starters, see above (from Eliyahu Fasher's archives) the official letter of protest from the ICF to FIDE. It speaks for itself.

My friend, I take the opportunity (as you will see on the cover) to send you the only chess Olympiad stamp (more weren't issued), with a day-of-issue cancellation stamp, on the Olympiad's envelope.

As can be seen in the picture of the envelope in the previous post, the Olympiad stamp is the black-and-white one in the top right, the Olympiad's symbol is printed on the bottom left, and it features two day-of-issue special 'chess Olympiad' cancellation stamps (gray, with a rook-and-knight logo). 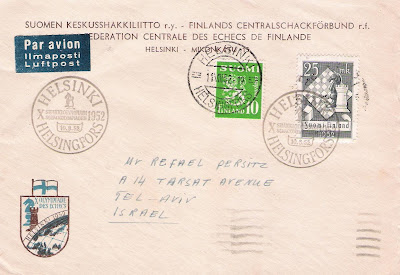 Cover of a letter from E. A. Mandelbaum to Rafi Persitz from the 1952 Olympiad

In the 1952 Olympiad, Mandelbaum had written interesting letters to Persitz in Tel Aviv, describing his experiences. He writes after the second letter noting that 'the Russians were very surprised from the quality of our game' despite the fact the final result 'might not look good on the cross-table'.

The most interesting part of the letters is Mandelbaum's description of the local scene -- the other teams and, especially, the other Jews, whether in the teams or in the local Jewish community:

And now a few chizbatim [gossip, tall tales -- A.P.]: the Finns arranged everything in an exemplary manner, including special food tickets for the players. The teams are extremely varied -- Whites, Hispanics, and Blacks. Our team made a good impression with the goyim [gentiles, non-Jews - A.P.]. The people here are very different: the Argentineans with their elegant uniform, the Russians in their composed, elegant clothes... we learned that six of the seven Americans (including the captain) are Jews. Reshevsky remained observant and proud... We made many new friends among the players.

Our local brethren [Finnish Jews - A.P.] are very excited and follow us with great interest. They welcomed us with their cars and try to make our time pleasurable. We feel great in their homes. This is one of the greatest events of their lives... they will tell it from father to son to grandson.

Mandelbaum notes the following about Ossip Bernstein, who visited the Olypiad:

You will be glad to hear that Dr. Bernstein was here and was received with great honors. His mere presence is a very pleasant surprise for us. A nice man, full of wisdom, who loves Jews... even knows some Talmud and Hebrew... We have many interesting conversations with him. Despite his age, he is young and light in his spirit. He has many acquaintances in Israel... everybody respects him. He is, after all, the last Mohican... He seems an important reason for the special treatment we are getting.

Thanks to Hadi Or and Yoram Lublianiker for the letter.

Rafael and Refael are variants transliterations of Persitz's first name. Rafi, Raffi, Raffie, etc., are variants of the contraction of his first name, that is used in day-to-day conversation (like 'Will' for 'William').

Once more I can't seem to get the font sizes right in blogger. My apologies.


The following picture hangs in the Rishon Le'Tziyon chess club. It is Vassily Smyslov giving a simultaneous display in the club during the 1964 Tel Aviv Olympiad (above). The caption says, 'An unforgettable evening of a simul with ex-world champion Smyslov, 1964'.

The web site notes there were 44 players (+37 -2 =5), and gives the names of those who won or drew. The web site adds that 'the building was full to capacity, and the curious climb on the window sills to observe' the display from outside.

Hard to imagine something like this happening nowadays -- in Israel or elsewhere.
פורסם על ידי Avital Pilpel ב- 7:28 AM No comments: