A quick note: chessbase, from whose web page I took this clip, has a long and interesting article on Chess at the Jewish Museum of Vienna. Did you know Simon Wiesenthal was an arthitect and designed a coffee house with a chess room?
פורסם על ידי Avital Pilpel ב- 11:10 AM No comments:

Chess for the Immigrants

From posters of a conference on game theory in Bar Ilan University. Chess is as always fascinating to game theorists: 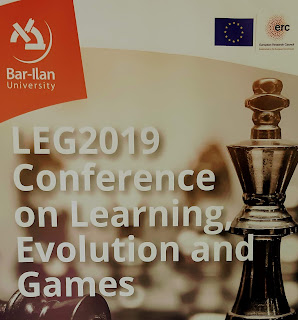 A frequent correspondent noted that in 1978, there was an 'Old Timer's Get Together' with the following photo. It is one of the photos which has the most of the Israeli players and organizers in one photo. Included are among those who were active in the 60s or before: 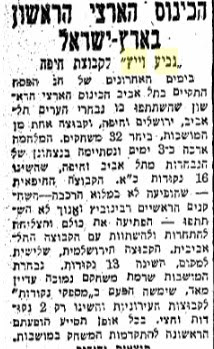 A frequent correspondent notified us of the Weiz cup, which took place in 1938. This was, in effect, the first league championship in Israel. Our correspondent gives us Marmosoh's contemporary report in Davar, 29/4/1938, p. 3 (top cutting). We note Fascher notes the exact details 20 year later, in La'merchav,  29/4/59, p/ 6 (bottom cutting).

Marmorosh notes this was a four-team event (Tel Aviv, Jerusalem, Haifa, and 'the settlements', i.e., the agricultural smaller communities). Each team had 8 players ; Haifa won. Fascher add the name is because the prize -- a silver cup -- was donated by Menachem Weiz.

Almost "anybody who was anybody" in Palestinian chess played -- with some exceptions. Marmorosh notes that, in Haifa, the 'top players' Rabinovich-Barav and Enoch didn't play, but the team still 'surprised everybody' and (eventually) won. Fascher adds that, in Tel Aviv, Blass and Rauch didn't play, either, and in Jerusalem, Burnstein was missing.

Fashcer also notes this was the third major achievement of the Palestine Chess Federation (est. 1934), after the individual Palestine championships and the Warsaw Olympiad.
פורסם על ידי Avital Pilpel ב- 6:28 AM No comments:

A frequent correspondent notifies us of an interesting contest which took place during the 1963 Natanya tournament: a chess humor context, 'on the initiative of Geffen Public Relations Ltd., responsible this year for promoting vacation tournaments to the general public'. The winners were B. Ben-Menachem, 'the oldest contestant', with (of all people) Itzchhak Aloni, the Israeli champion, second, and V. Kahana third.
פורסם על ידי Avital Pilpel ב- 6:00 AM No comments:

Above is film by British Movietone of Hastings, 1966/1967. There is a short view (about 15 seconds) of Czerniak playing Mecking. Czerniak ended last, with 3/9, in that event.
פורסם על ידי Avital Pilpel ב- 3:23 AM No comments: