We had already noted this book and its unusual title, but I was not aware that a Hebrew edition existed. We add that Tim Krabbe found that there is at least one serious game, Heidenfeld - Kerins (Dublin, 1973) where there were in fact three castlings -- Heidenfeld castling twice, 10.O-O and 33.O-O-O.

Not chess related: there is at least one more 'Foy' in literature: 'Death of a Foy' by Isaac Asimov. It is a feghoot -- a joke short story ending in a pun. In this case, the alien Foy's "dramatic last words" are an (awful) pun on the popular song 'Give my Regards to Broadway'.

The Israeli science fiction magazine Fantasia 2000 reprinted this story in the 1980s, -- translated into Hebrew, so the pun was lost in translation, not that many of the magazines' readers would have heard of 'Give my Regards to Broadway' in any case. I recall reading the story as a teenager and scratching my head -- wondering what made Asimov write such a pointless story.
פורסם על ידי Avital Pilpel ב- 8:19 AM No comments:

Moshe Roytman notifies us of an unsigned collection of short items from Ma'ariv on the date above, some of them related to the chess Olympiad then taking place in Tel Aviv. It has the following caricature of Reshevsky, by the Ma'ariv caricaturist "Ze'ev" [Ya'akov Farkash, 1928-2002].

Farkash was one of the four members of the affectionately called "Hungarian Mafia", a team of four staff members of Ma'ariv who had been in the paper for decades, from the 50s to the 90s. They include himself, the caricaturist "Dosh" (Kariel Gardosh), the journalist Yosef "Tommy" Lapid, and satirist Efraim Kishon. Of them, as we have noted in this blog before, Lapid was inter alia the head of the Israeli Chess Federation, Kishon saved his life during the war by playing chess, and Dosh illustrated covers for chess books; we now add a chess connection for Ze'ev.

The story is that in the 1964 Olympiad in Tel Aviv, the Saturday round started at 5:30 instead of 4:00, to avoid desecrating the Shabbath (from sundown Friday to Sundown Saturday), but Reshevsky got special permission to start half an hour later than that. It is well known that Reshevsky would not play on the Shabbath and was usually given the option of starting to play after it ended when he played in tournaments. But here all the rounds began later for just this reason. So why would he need an extra half hour?

The reason given -- how seriously, it is hard to tell -- is that Reshevsky, being a religious Jew, also observed the religious tradition (though not an absolute requirement) of having three holiday meals on the Shabbath, which means he would only be available, not just after the Shabbath had ended at 5:30, but only after he finished his third Shabbath meal. Perhaps; we note, however, that as the Shabbath ended during the time of the Olympiad only a few minutes before 5:30, and religious Jews are not allowed to drive or travel by car, carry money, etc., during the Shabbath, it is likely that it would take Reshevsky a few more minutes to get to the tournament hall from his hotel than a person who does not follow these rules in any case.

The article adds that he played against Ya'akov Mashian  (ne Hushang Mashian) as stated in Gaige's Chess Personalia) and 'of course' won quickly 'as a dessert'. Mashian, a Jew, was playing first board for Iran. He later emigrated to Israel and became an active player there.

We add that the same issue of Reshevsky and the Shabbath -- including his interesting explanation as to why he does not play on the Shabbath, when playing chess is not in fact (by most authorities) forbidden on the Shabbath, as well as a somewhat similar illustration by Buchwald -- when he came to the 1958 tournament in Israel, as noted here.
פורסם על ידי Avital Pilpel ב- 7:28 AM No comments:

Moshe Roytman notified us of a long article in Ma'ariv about the 1966 chess Olympiad. In it we find an interesting pen-portrait of Moshe Czerniak, by the paper's chess correspondent, Shaul Hon, describing him in the meeting place in Madrid, Spain, where the Middle Eastern, African, and Western European teams were housed before being flown to Havana:


[Czerniak] knows personally almost all the teams' members. On each he has a funny anecdote or story to tell. You pull his sleeve -- and dozens of stories fall out, like ripe pears... He became the [Israeli] team's unofficial translator, knowing no less than seven languages, Spanish included... without him the restaurant menus would not be more intelligible to us than if they were written in Chinese.

But not only we make use of him -- the South African team seized him like a valuable prize, since without his help they would have to mumble and point their fingers, and the Spaniards would not understand anything they want... twelve teams are now in Madrid, including Morocco [i.e., an Arab state -- the point is that it did not boycott the olympiad due to Israel's presence].

Hon adds that the Israeli team is made of the "old timers": Smiltiner, Aloni, Porat and Czerniak himself; the two "youths" are Kagan and Kraidman. Indeed, this was the "last hurrah" of the old guard. In 1968 only Czerniak and Porat played, and -- in 1974 -- Czerniak, on the third board.


We have already mentioned Shlomo Seider in this blog in previous posts, and we noted that there is a memorial site for him. The site in question had been taken offline, but Yochanan Afek pointed out to us it was replace by a Facebook memorial page. The page is in Hebrew, but there are many photos, including of family, personal effects, etc. It links inter alia to the Wikipedia page about him, and a lot more).

In particular, the memorial page has, not only problems and notes by him, but also interesting articles by him. In particular he argues in one article that, since chess composition is first of all an art and only secondarily chess, one should not be dogmatic about not allowing illegal positions (which cannot be reached from the array), or even positions that have no solution, so long as the thematic beauty of the idea is great.

The site, in particular, has numerous of his "original paintings" -- that is, the problems he sent to problem tournaments. Here is one, which won an honorable mention (as the Hebrew on it shows), which uses seven grasshoppers (the "upside down queens"): 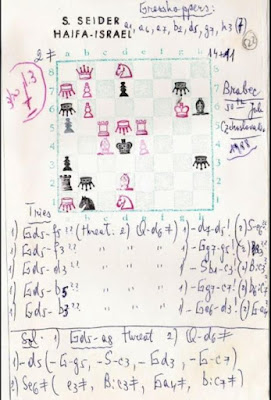 
As Yochanan Afek reminded us, when Hillel Aloni passed away, Ha'aretz chess editor, Israel Shrenzel (ph. English spelling) had written extensively about him, including a photo (above). The paper notes that Aloni was not only a talented composer -- the father of the Israeli endgame studies -- but also promoted and trained many younger composers, such as Afek himself, Amaztia Avni, Yehuda Hoch, Ofer Komai, and others. Afek adds the AVRES site has a memorial page as well with many studies.

He added one of Aloni's early compositions, from 1959 (annotations by Shrenzel):


Above is a photograph of the De Haar Castle in the Netherlands. On a recent tour there I have found out -- unsurprisingly -- that the owners had had, in (one of) their living rooms, a nice chess set:


The set is arrange in the array, and, for once, with the right bottom square being white.
פורסם על ידי Avital Pilpel ב- 7:31 AM No comments: