FM Allan Savage (the link is to his chess homepage) shares with us an  envelope from the Third International (Preolympic) Tournament, Nethanya (נתניה - also spelled Natanya, Netanya, etc.), June 1964.

It was one of three international tournaments in Israel that year -- the other two being the Tel Aviv Olympiad, and a small tournament in Jerusalem which "recruited" some of the Olympiad's players. All were mentioned in this blog (look under the "tournament" label).

To avoid a possible misunderstanding, 'preolympic' does not refer to any official FIDE designation of the tournament, but simply to the fact that this (individual, not team) event took place before the Olympiad, which, as the link (to Olimpbase) notes, took place later in the year than usual -- in November -- due to the climate.
פורסם על ידי Avital Pilpel ב- 10:54 AM No comments: 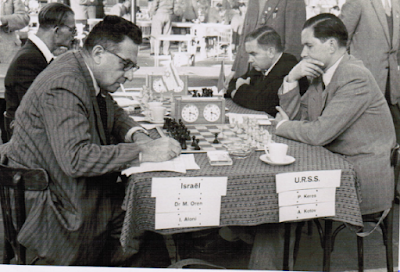 Ami Barav had generously sent us the following two informal photographs, taken by his father, Israel Barav (ne Rabinovich) in the 1954 Olympiad (Amsterdam), of the match between the USSR and Israel in the third round, Sept. 14th 1954 according to Olimpbase.

The meeting caused a sensation in Israeli chess circles: while Oren lost to Keres, Porat and Czerniak drew with Botvinnik and Smyslov, respectively, and Aloni beat Kotov. 2:2 -- against the world's strongest team, with the "bonus" that one of the draws was against the world champion.

"The Half Dozen Defeats of Grandmaster Savielly Tartakover"


This is a video (in Hebrew) of an Israeli group, "Gute Gute", send to me by a colleague (link in Hebrew as well).

The song tells of Savielly Tartakover (also spelled Tartakower), who, having lost six games in a row, gave outlandish excuses for each of first five losses: he forgot who is black and who is white, arrived a day late to the game, fell asleep in the comfortable player's chair, etc. As for the sixth, he notes: 'do I have to win them all'?

This old story about Tartakover (with someone less outlandish excuses in the "original" version) is, no doubt, a tall tale, but how the story originated -- and what possessed the group to write a song about it -- is beyond me. I would not be surprised if it was told about other players as well.
פורסם על ידי Avital Pilpel ב- 8:33 AM No comments: