Our correspondent and chess historian Tomasz Lissowski had forwarded to us the following photo and (below) a transcript of an article, both from the Polish magazine Chwila of March 7th, 1931. The magazine was published in Lviv (to use the current Ukranian spelling), then in Poland. Chwila, adds Mr. Lissowski, was a Jewish-owned, Polish-language magazine read by the Jewish-Polish intelligentsia in Lviv at the time.

The article and photo were found in Chwila by Mr. Jan Jaremko, who in turn forwarded it to Mr. Lissowski. They concern a simultaneous display given by Akiba Rubinstein in Lviv on March 5th, 1931, in the 'Literary and Artistic Casino' -- today, adds Mr. Jaremko, the reading room of the regional scientific library.

The result was +8 =15 -8 (!). The report was, as can be seen below, written by the chess master Henryk Friedman. It mentions that about 300 people attended as players or spectators, and also names  some of Rubinstein's opponents. Unfortunately no game scores were given. Mr. Lissowski adds that in the first line on the left one can see Edward Gerstenfeld, another of the many Jewish-Polish players -- like Friedman himself -- who later perished in the holocaust.

We thank both Jaremko and Lissowski heartily for their research and permission to publish it on this blog! 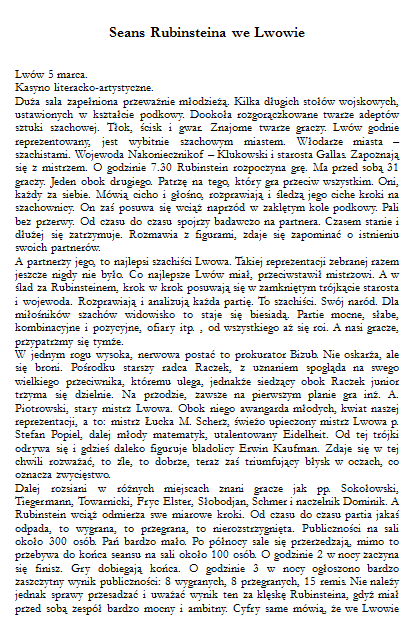 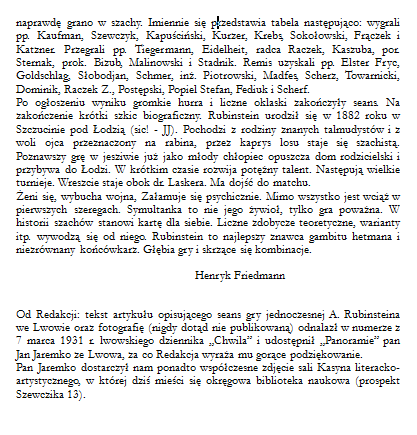 
We have previously mentioned Yeshayahu "Shaiy" Blaustein in this blog, including one of his problems. This time, a problem which -- as the photo above notes -- will 'undoubtebly live on as one of the classics of the 20th century'. I am not so sure about that, but it is a very nice problem.

The Hebrew text in the obituary adds more biographical material, much of which can be found in the link given here, and mentioning he was also an architect and an artist (as well as a talented amateur photographer).
פורסם על ידי Avital Pilpel ב- 9:16 AM No comments: 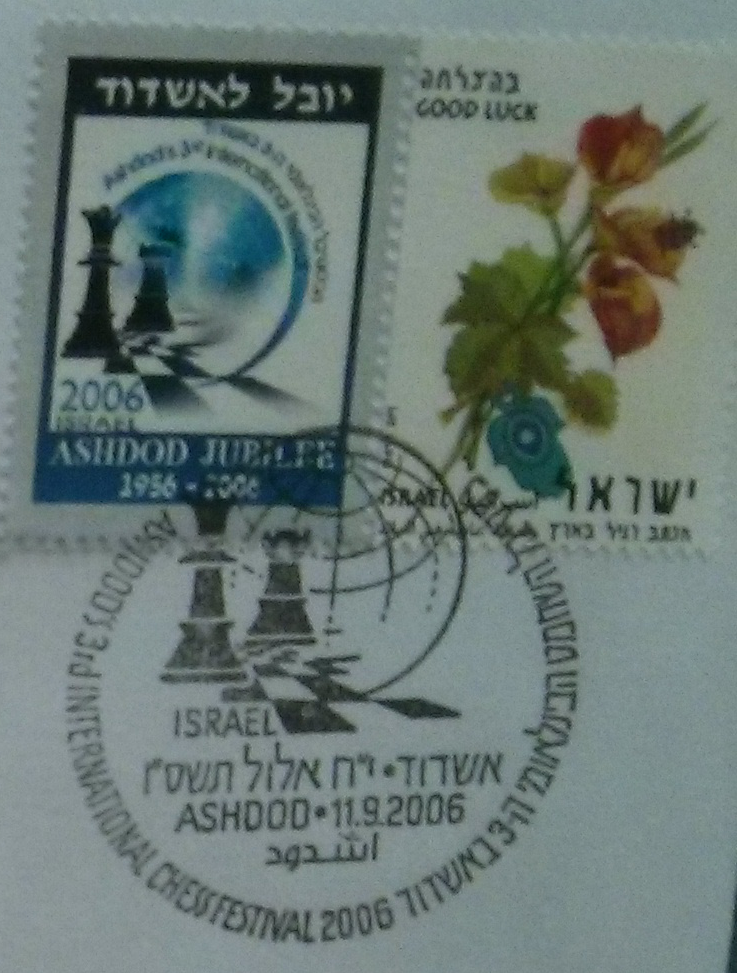 Here are two segments of a envelope (limited to 1000 units) that was produced by the Israeli postal office to celebrate the 3rd International Chess Festival in Ashdod, 2006.

If one wonders about why so many strong tournaments happen to take places in Be'er Sheva (see previous post), Ashdod, and other cities in southern Israel, the explanation is interesting. Those cities, where rent and cost of living is relatively low, became the home to many Jewish emigrants from the former USSR in the 1990s, which led to a huge increase in chess quality, as Ha'aretz [link in Hebrew] explains. In fact, Be'er Sheva in 2005 had the highest concentration of chess grandmasters relative to the population in the world.

True, such statistics are not particularly meaningful, since the addition or subtraction of a single GM changes the ranking, GMs being (despite their "inflation" in recent years) quite rare, and the "highest proportion" having more to do with the city's small population than the large number of grandmasters. There are many more grandmasters in total in, say, New York, to say nothing of Moscow or St. Petersburg...

Still, it does mean something -- eight grandmasters (in 2005) in a town of about 200,000 is quite impressive, especially as it is, in this case, indicative of a high level of chess activity on all levels, as an article in chessbase web site about the Be'er Sheva Chess Club notes. The same article, incidentally, noted that currently Be'er Sheva had been passed by Reykjavik -- another small city with a well-known chess history, of course, as anybody who has heard of Fischer or Spassky knows...
פורסם על ידי Avital Pilpel ב- 8:04 AM No comments: 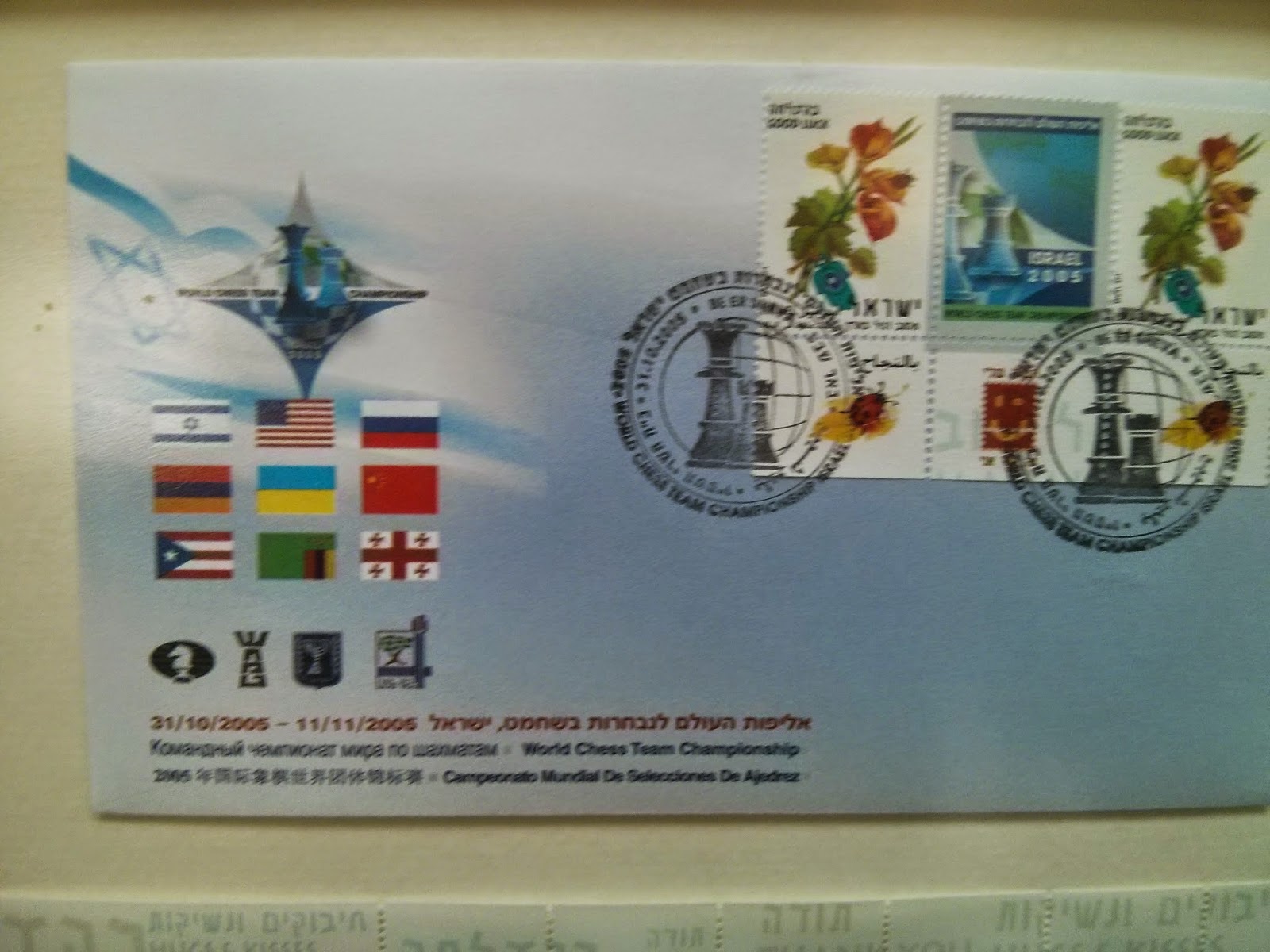 On the subject of chess and stamps, two quick items -- an envelope and a stamp sheet -- celebrating the 2005 6th World Team Chess Championship which took place in Be'ev Sheva.

The WTTC should not be confused, incidentally, with the chess Olympiads, the other important international team chess events. For an explanation of the differences, see the excellent www.olimpbase.org web site about the WTTC, inter alia.
פורסם על ידי Avital Pilpel ב- 7:36 AM No comments: