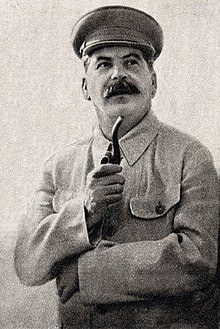 A previous post noted that Stalin was reputed to be a strong chess player, and doubted this is accurate. A correspondent notes Stalin did play chess. He notes the evidence is in Stephen Kotkin's biography of Stalin:

[Kotkin] is an outstanding scholar who specializes in Stalin. You can find an [English]  translation  in the first volume of his Stalin trilogy of a letter written by Yakov Sverdlov on 12th March 1914, in which Sverdlov, who had an elephantine memory, boasted of beating the future despot...

Our correspondent found the Russian text here, and provides the English translation, in p. 154 of (one of) the English editions of Kotkin's Stalin trilogy:

My friend [Stalin] and I differ in many ways, " Sverdlov wrote in a letter postmarked for Paris on March 12th, 1914. "He is a very lively person and despite his forty years has preserved the ability to react vivaciously to the most varied phenomena. In many cases, he poses fresh questions where for me there are none any more. In that sense he is fresher than me. Do not think that I put him above myself. No, I'm superior [krupnee], and he himself realizes this... We wagered and played a game of chess, I checkmated him, then we parted late at night. In the morning, we met again, and so it is every day, we are our only two in Kureika.

The incident occurred, notes our correspondent, when Stalin and Sverdlov were exiled together to the very small village of Kureika before the first world war. He adds that Sverdlov is a partial source, as he quickly fell out with Stalin, but nevertheless there are two reasons to believe Stalin was indeed a weak player.

First, if Stalin were any good, good players among the bolshevists, e.g., Ilyin-Zhenevsky or Krylenko would have noticed. Second, Sverdlov boast that he checkmated Stalin (as opposed to have won) is typical of beginners, suggesting Sverdlov himself was a weak player, and yet he beat Stalin. 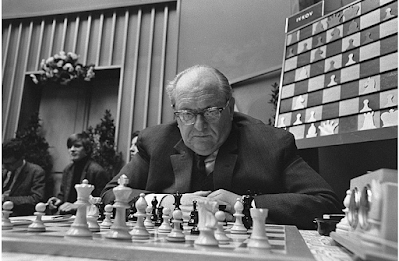 Herbert Halsegger notifies us of this very nice photographs of Czerniak, playing in Hoogoven, 1966. The photo is available on the Wikimedia Commons web site.