Chess in the Kibbutz and the IDF 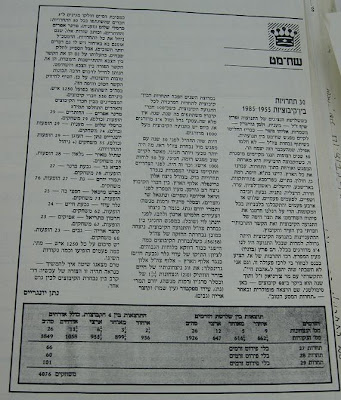 In the above article, Natan Jungreisz (Geremy Gaige's English transliteration), speaks of 30 years (1955-1985) of the 'inter-kibutz' (sic) tournament. I am not sure what the source of the article is, as I found it as a cutout in Eliyahu Fasher's archives.

Every year, each of the three streams (political movements) within the kibbutz movement would send a team, and all three teams would meet in a tournament held in a 'neutral' location -- Jerusalem, Tel Aviv, the IDF -- with the hosts adding a fourth team. Jungreisz, who managed the tournament for these 30 years, mentions inter alia:

2). Moshe Czerniak was contacted to help promote chess in the kibbutz, had visited 60 different kibbutzim within a year, giving a simultaneous display here, a lecture there, a 'best move competition' in the third place, etc. This means, practically, a weekly visit to a remote location -- no mean feat for a middle-aged man in 1950s Israel.

3). In the 1985 tournament, this time with the host team (as in the first, 1955 tournament) being the IDF, the army chief of the general staff (at the time, Moshe Levi) came late ('he has more pressing commitments', notes Jungreisz) but gave a speech praising the connection 'between the IDF and the kibbutz movement, as well as that between the IDF and chess, which allows the soldier to acquire many good and important qualities'.

Was there ever another chess tournament (in any country) when the chief of the general staff of a country's armed forces was present and gave a speech praising chess?
פורסם על ידי Avital Pilpel ב- 12:43 PM No comments: 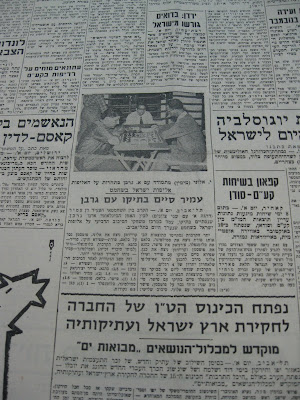 Chess was always popular in Israel. But one wonders if, today, chess will make it to the front page of the newspaper, as it did in the 1950s. Perhaps it would happen for some extraordinary event, but probably not for a run-of-the-mill report.

In the above front page article, we have a report of the fourth round of the Israeli chess championship. The highlight (and headline) was that a strong amateur, Dan Amir (rated, the article says, an 'Aleph player with two pluses' -- equivalent in strength to a strong expert, more or less) drew with Erno Gereben, an IM. The photo shows Gereben in play with Itzchak Aloni in another game from the same tournament.

This made the front on the same day that, as other front-page articles on the same page show, the USSR declared their space probe had orbited and photographed the far side of the moon for the first time, and that, locally, it was decided the defendants responsible for the Kassam village massacre would be put on trial.

One wonders if today the chess tournament as a whole would even be mentioned anywhere apart from the chess column, let alone any of its rounds given the front page with a photograph, to boot.

Again sorry for the wonky font size -- blogger is acting up again... 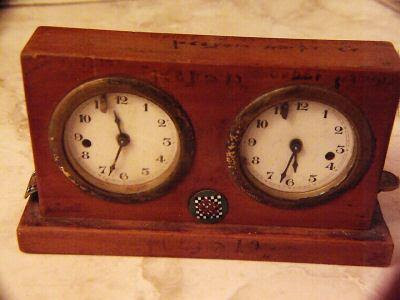 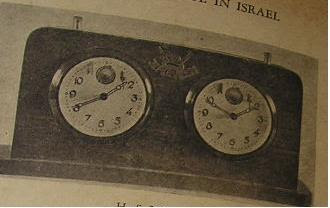 What was the first chess clock made in Israel? Two suggestions. Top, we have a photo (found on e-bay) of an Israeli chess clock, from the 1950s. Note the unusual placement of the clock's buttons on the side, instead of the top, of the clock. This makes it harder to bang them with pieces in blitz, and, more seriously, harder to see from afar whose turn it is to move. More details about this clock would be welcome.

Below, we have an advertisement for 'Chess Clocks Made in Israel', by H. & J. Benjamin, 'Clocks & Watches Manufacture & Export', Jaffa Road 167, Jerusalem. Their P. O. Box, by the way, is 639, and their telephone number, 62-069 -- which gives one a good idea of the size of the city of Jerusalem in those days. This clock seems to have a more standard design. Again, more information about them -- as well as actual clocks -- would be welcome.
פורסם על ידי Avital Pilpel ב- 9:48 AM No comments: 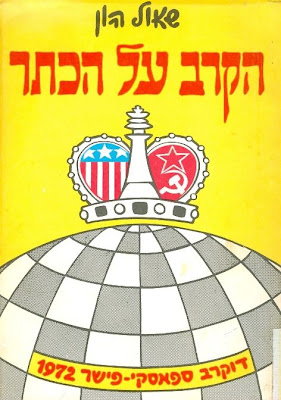 The Israel chess world has lost one of its oldest and most active members -- Shaul Hon. As the obituary in the Israeli Chess Association's bulletin (Aug. 2009, p. 38) notes, he was a true polymath -- earning a degrees from the Hebrew University in nine (!) different fields, including inter alia biblical studies, art history, linguistics, and law. The obituary adds that he was Ma'ariv's (Israel's largest, or second-largest, newspaper) resident reporter for chess, law, and archeology -- surely a unique combination.

Hon's author's page on an Israeli used-book internet 'clearing house' lists fifteen different books (not counting "doubles") of which eleven are chess books. This is without taking into account his hundreds of articles, columns, investigative reports, etc. on various subjects, from literature and law to art history and chess.

Hon was the only (so far as I know) Israeli reporter that covered live the 1972 Fischer - Spassky world championship match. As he related in his book, Ha'Krav al ha'Keter [The Fight for the Crown] (Tel Aviv: Ma'ariv Library Press, 1972), he was the first reporter in the world to officially break the story that Fischer is going to forfeit the second game on time -- half an hour before all other reporters. As Hon explains, after Fischer was 30 minutes late, he realized Fischer might like to be late 5 or 10 minutes, but certainly not half an hour, and that therefore he will not show up.

Hon was a bit of a fanatic for correct Hebrew -- unsurprising, considering he was inter alia a student of Naftali Hertz Tur-Sinai (nee Turtschiner), the head from the 1930s to 50s of the Academy of the Hebrew language, an institute whose raison d'etre is to find Hebrew words to replace foreign ones. (Tur-Sinai, by the way, was satirized by the humorist Efraim Kishon in the 1950s in the character of 'Elihav bar-Ahisemech, the living soul of the Hebrew language'.)

Tur-Sinai, Hon related in a 1964 article, sent him to 'purify our chess terms from foreign expressions that unfortunately still appear in our midst.' (Hon, Shaul. Minuach Ivri be’Shachmat [Hebrew Terminology in Chess]. Shachmat, 2nd year, no. 8 (March 1964), pp. 3-4.) Hon suggests, e.g., that since a pawn in Hebrew is a hayal (lit. 'soldier'), one should not talk of kelim kalim and kelim kvedim ('light pieces' and 'heavy pieces', from the English) but rather of ktzinim zutarim and ktzinim bechirim (junior and senior officers). The international term 'Zugzwang' should be replaced with the Hebrew kfai ('to be forced to act', from the verb kefot, 'to force someone to act'.) Naturally, kfai must not be confused with kfat -- 'to be completely tied up' -- Hon's translation of the German (and Hebrew chess jargon) Patt, or stalemate.

It is not surprising these suggestions did not succeed, since players are not likely to change common terms just to preserve perfect logical consistency in their jargon. However, some suggestions were accepted: for example, to replace gilgul (lit. 'reincarnation') with hachtara (lit. 'coronation') as the Hebrew term for 'promotion'. Most players seem to intuitively think of the promoted pawn itself (or, as in Through the Looking Glass, herself) as rising in rank, usually to royalty, not as "dying" and being "reincarnated" as a piece -- despite the fact that the pawn is in fact removed form the board and another piece (usually the queen) put in its place.

May he rest in peace.