Was it Truly a "Mystery" Tournament? Netanya 1964 (and Stahlberg - Blumenfeld 0:1: Complete Game Found)

Indeed, it was in fact the top, international, tournament in the traditional Shach Kayit ('Chess Vacation') event in Netanya as (for example) Ma'ariv, 9/6/1964 p. 10, reports, as Mr. Roytman informs me. The two others, incidentally, were a closed tournament for strong Israeli players and an open tournament for amateur players.

So, one may ask indeed: where is the big mystery?

In my defense I merely meant to say that the tournament is a "mysterious" one for the non-Israeli public, not appearing in Chessbase or other sources despite having famous players like Filip and Stahlberg. Indeed this seems to be the case: not only does it not appear in those databases, but I got a request from two different European chess historians for games: one of them (which prompted my original post) heard of the tournament but could find no games, another had noted that the tournament's existence was unknown to him!

All this goes to show what should be an obvious point. Databases and the Internet are all well and good -- but to really understand what happened,  one must go back to the original sources. This is especially true when one investigates the history of chess in Israel or in another country whose language is not a major European language, and thus often has material not known to most other chess historians. Indeed, the whole point of this blog is to familiarize the non-Hebrew-speaking public in general, and chess historians in particular, of information that the language barrier (not to mention availability of material) makes hard to find.

In any case, here is the corrected Stahlberg  - Blumenfeld game, which Schachmat reported was played in the 9th round: 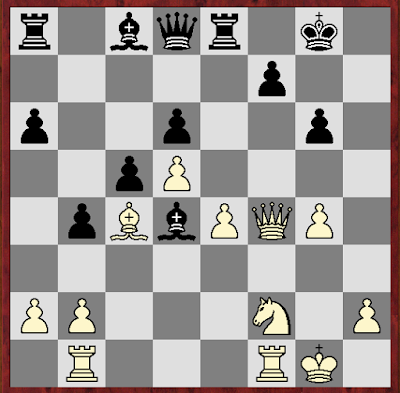 
We have often noted in this blog the close relationship between education in general, and the teaching or evolution of the Hebrew language in particular, and chess. Our frequent correspondent, Mr. Roytman, notes that Davar reported (Feb. 9th, 1951, p. 9) that when Pinchas Rosen had given the opening speech in the first Israeli championship, he said he "feared" not the chess champions, but the "Hebrew champions" -- prof. Tur-Sinai and minister of education and culture David Remez, both known for their almost-fanatical passion for correct Hebrew.
פורסם על ידי Avital Pilpel ב- 8:16 AM No comments:

Good thing he Amounted to Something in the Chess World

Without comment, here is a scan of a document found in the collection of one of Yoram Lubiainker's friends (or, rather, that of a friend of a friend, as he notifies me): 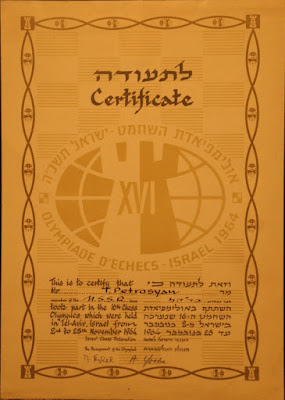 I hardly think FIDE should have denied "T. Petrosian" his participation certificate in the 1964 Olympiad, just because he was world champion at the time, but still, are Lubialinker and myself the only ones who find this amusing?
פורסם על ידי Avital Pilpel ב- 6:10 AM No comments:

In 1964, a tournament in Netanya took place with Gideon Stahlberg, Miroslav Filip, and others, with the young Yair Kraidman winning (7.5 / 11), ahead of Yidael Stepak and Filip (7), Stahlberg and Guti (6.5), etc. This was one of Kraidman's first significant victories.

Surprisingly the tournament does not appear in the "usual" sources (i.e., Chessbase's databases, chessgames.com, etc.) Davar reported on the tournament, by its chess column editor, G. Palai. The game Stalhberg - Rudy Blumenfeld reached this position:

Unfortunately the score up to this point is corrupted. As printed, it is the impossible:

Can anybody reconstruct the actual game -- or find more games? (I do not currently have at hand Shachmat from 1964, for example, which would be the obvious place to check).

Mr. Bruce Monson, who is researching Jewish life in California, found in the Jewish press of the 1930s -- more specifically, in the Yiddish-language California Jewish Voice -- a short-lived chess column edited by Noam Light. It covered, in particular, some games from the Pasadena, 1932 tournament won by Alekhine.

Above, is how the beginning of Borochov (or Borochow) - Araiza (Caro-Kann, 0-1, 23 moves) was printed, "translating" the initials from the Hebrew / Yiddish to English:

It seems a small wonder that algebraic notation eventually won the day.