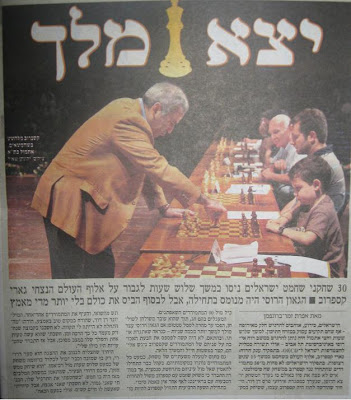 Only in Israel, I presume, can the following happen: a chess item appears on the first page of the most popular (or second most popular) daily in Israel, Ma'ariv. Serenity in the Middle East at last? Not quite: the item, 'Kasparov Came out a King', is right above the main headline of the day -- where the previous Chief of the General Staff of the IDF, Moshe "Boogi" Ye'elon, declares that Israel 'has the ability to attack Iran' and that Israel is 'already is in a military conflict with Teheran.'

Be that as it may, on the last page of the paper, more details are given, including a large photograph, of the chess item's subject: a simultaneous display by Kasparov in Tel Aviv University given the previous day (10.5). Kasparov defeated all of his 30 opponents in a little more than three hours. The report adds, inter alia:

The time Kasparov spent next to your board soon became a status symbol -- if he lingered for more than a few seconds, you probably have challenged him...

...When after two hours all the games were still in progress, and some in the audience believed a sensation is about to happen. But it soon became clear... nobody really stood a chance. In the beginning of the fourth hour of play Kasparov began to get tired and blew away his opponents one by one...

...The only one to steal the show was Sa'ar Drori [pictured - A.P.], who is only eight and already has in his resume a game of almost three hours against a grandmaster. 'He plays a really strong game', Drori concluded. 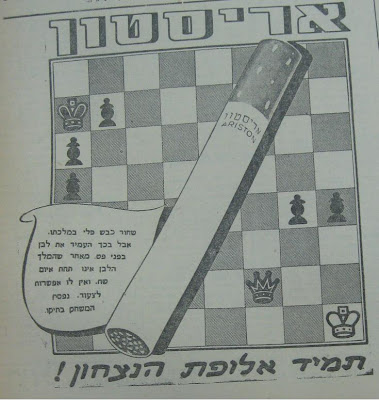 Chess motifs in advertising are quite common, but this ad -- for Ariston Cigarettes -- is quite exceptional. The position on the board is a stalemate, and the ad (lower left, small text) explains (non-standard terms used are sic):

Black conquered a piece with his queen. But in this way he made White's king face stalemate. White is not in check and cannot move. The game was stopped as a draw.

It cannot be often that advertisements with chess motifs actually show a diagram with a meaningful position -- let alone one that demonstrates stalemate (as opposed to checkmate, or perhaps the array). Ironically, the motto of this chess-themed advertisement is, 'Ariston: Always the Victorious Champion!'.
פורסם על ידי Avital Pilpel ב- 11:29 AM No comments:

Since we've just mentioned Max Euwe, it is appropriate to notice (above) one of the chess stamps of the 1976 Haifa olympiad that would not have taken place without his support. There is an interesting tribute to Euwe through stamps issued in his honor in the following web page.
פורסם על ידי Avital Pilpel ב- 6:59 AM No comments:

Euwe in Israel and Chess in the Kibbutzim 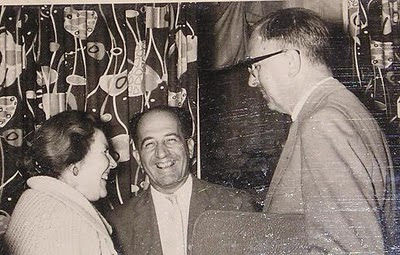 GM Max Euwe, world champion and head of FIDE, was a friend of Israel and a man of principle. He insisted on holding the 1976 chess olympiad in Israel, as agreed, despite attempts by the USSR and the Arab world to "steal" the event. As Shlomo Kandelshein notes in his book Chess Olympiad Haifa: 1976, when the Soviets declared it is irresponsible for him to hold the olympiad in an "unsafe country", he replied that he felt quite safe in Israel on his visits.

But Euwe didn't visit Israel only on the occasion of the 1976 olympiad (and FIDE congress). He also visited before, in the early 60s. Above is a photo of Euwe and his wife from that time. Adds Eliyahu Fasher in the Israeli Kibbutzim's Yedion [bulletin], Vol. 13 no. 9, May 1977 (Shavuot [Pentecost] issue of the Jewish year 5733), p. 34:

Prof. Euwe and his friend Prof. Mehring from Holland toured Israel about 15 years ago and visited many kibbutzim. At the end of the tour they wrote an article in La'Merchav [an Israeli newspaper] and noted especially the high level of chess playing there. They explained [this] in the Kibbutz member's need for intellectual stimulation, one of the ways to achieve it being chess.

Euwe was a gentleman in the real sense of the word. Praise from him means quite a bit.
פורסם על ידי Avital Pilpel ב- 6:21 AM No comments: 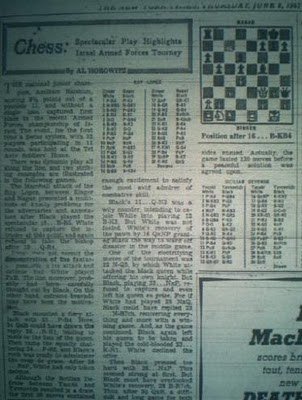 In 1967, the IDF championship took place just before the Six Day War. Two games from it, including Nagar's brilliancy, were reported in the New York Times' chess column on June 9th, 1967 -- as the war was still raging. Nagar told me in an interview in April 2010 the secret behind this most famous game of his (my comments in square brackets):

In 1967 the IDF championship was in Tel Aviv's Beit Ha'Chayal ['Soldiers' Home', a hostel for soldiers on leave]. Most of the players resided there. The latest issue of [the Israel Chess Federation's magazine] Shachmat, just came out, and featured a game between Daniel Mor and Gad Rafaeli -- not the same Lt. Gad Rafaeli from the famous song, by the way -- where Mor played the Marshall Gambit as Black. I thought I found an improvement to Mor's play.

Sure enough, a few days later Gadi Singer allows me to play the Marshall gambit -- and he follows Rafaeli's game exactly to the critical point! I started to sweat and shake, as I realized that I am now about to make a real-live '!!' innovation over the board (18. ... Bf4!!), a once in a lifetime experience!

By the way, Dov Porat, who played in the tournament, was killed a few weeks later during the Six Day War. I probably played the last serious game of his life with him.

Here is the game, with Horowitz's annotations.

The Marshall attack of the Ruy Lopez. 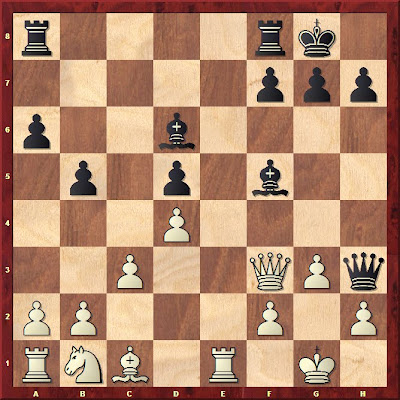 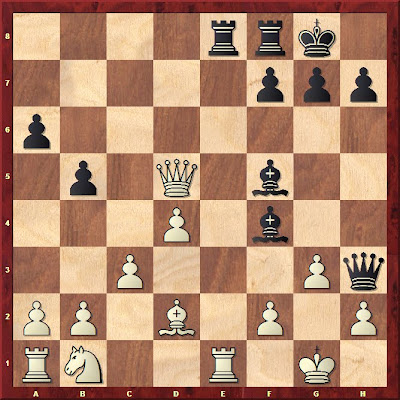 Spectacular... presented a multitude of knotty problems for the adversaries and annotators. White refused to capture the intruder at this point...

Space does not permit the demonstration of the fantastic possibilities for attack and defense had White played gxf4. The line, moreover, probably had been carefully thought out by Black [true! -- A.P.] On the other hand, extreme bravado may have been the motivation. 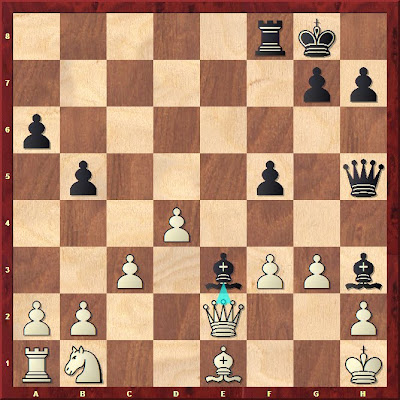 Equally shattering. Black's rook is ready to administer the coup the grace.

For those who want to read Horowitz's original column, click on the picture at the top of this post for a larger version or go here for better-quality photos.

A note about the names: "Gadi" and "Shmulik" are common diminutives of the given names Gad and Shmuel. I spelled Zinger's last name as Horowitz did, though it probably is often written (with the German 's'-sound) as 'Singer'. I couldn't find any of the players mentioned (except Horowitz...) in Jeremy Gaige's Chess Personalia: a Biobibliography, so I used Horowitz's 'Zinger' for consistency and phonetic spelling elsewhere.