Looking for other material, we have by chance found a scathing review of a book by... von Weisel, which we have met here before, published with Asad Bey [ph. spelling] in Germany. The review, by Wolfgang Jungerau [ph. spelling]. The review appeared in Davar on p. 8 of the literary supplement on August 27th, 1938.
The book is Allah is Great - a popular book about Islamic history. The reviewer notes the book has little that is new, and in fact suspects the book was mostly cribbed from previous popular histories. 'The opening is pathetic, it continues as in a bad movie, and ends with a cheap romantic conclusion.'  The reviewer notes that the book was also published in French, this time only with Bey's name. 'Did Weisel regret the joint effort and wished his name removed?'
Ouch.
פורסם על ידי Avital Pilpel ב- 4:56 AM No comments:

Charles Jaffe's Chess Primer, a 'spectacularly awful book' according to Edward Winter, was also advertised in Palestine. The advertisement above is from Davar, June 18th, 1937, p. 8. It is a Hebrew translation of the biography from the book. See Winter's article for more details about the rather significant inaccuracies in the description. 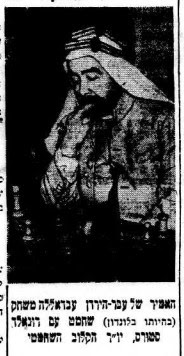 The above picture of Abdullah of Transjordan playing chess is well known, but what was the occasion? The answer is found in, of all places, Omer (5 June 1937, front page,) an obscure 2-page paper published in Tel Aviv. The photo, says the caption, was taken when Abdullah played in London with no other than Sir Ronald Storrs, ex-military governor of Jerusalem, when Abdullah was on a private visit.

Storrs and Abdullah apparently played whenever they met. One time they have met in 1922, they have played 'eight games after dinner while the rest of the conversation flagged.' On the same British diplomatic visit, Abdullah also played chess with British diplomats Sir John Philby and with Sir Herbert Samuel (Samuel won). See Mary Wilson's King Abdullah, Britain, and the Making of Jordan (Cambridge University Press, 1990), p. 70. 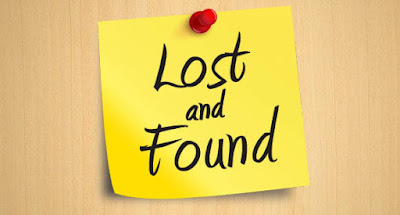 One of the problems with doing history is that even primary sources are often not 100% reliable, to say the least. For example, starting from ca. 1935, Davar proudly claimed it has a chess column in its paper on Fridays. But there is no chess column. Had Marmorosh, the chess column's editor, quit? Not quite: the chess column moved to Thursdays, but the newspaper's table of content was not updated... 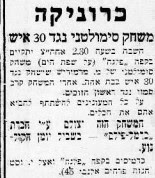 We have already noted that Marmorosh was filmed playing a simultaneous display in Tel Aviv in 1935. From the same column as in the previous post, we find the advertisement for that display, adding in large letters, 'This game will be filmed by Carmel-Film for the Newsreel.'

The following note (Ha'aretz, 21 June 1935, p. 13) is a notification of the winners of the solving tournament by the editor of the chess column in Ha'aretz, Marmorosh. It is interesting to note that among the tope solvers we have three women: Leah Broida, Hannah Zefah and Mira Vergad (ph. spelling). Broida and Zefah also won two of the three top prizes: Hans Kmoch's Rubinstein Gewinnt! and a chess clock, respectively. 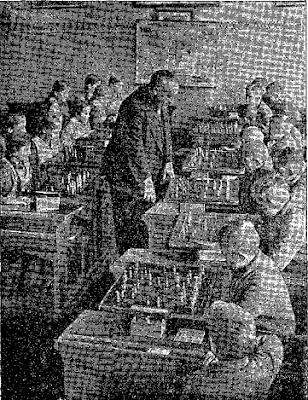 On the same page as the previous post, there is a photo of Bogolyubow playing a simultaneous game in the well-known "chess village" of Strobek. The note credits other "newspapers" in general, but does anybody have a better quality photo?

Edited 17 May 2021: We thank Douglas Griffin for linking to just such a photo (as well as other photos of the event) in the comments. We also add that on the villager's chess club web site there is a list of all players who gave a simul there (in German). We thank Herbert Halsegger for the link.

One doesn't need to know Hebrew to spot the mistake in the note about Tartakover's book...