The photos above is that of a very young Mikhail Tal, from Kol Ha'Am, February 28th, 1958, p. 6. The paper, a communist one, was especially concerned with informing its readers of chess in the USSR and other communist countries.
פורסם על ידי Avital Pilpel ב- 5:20 AM No comments:

New Candidate for 'Earliest Mention of Chess in the Hebrew Press'

We hare already mentioned that Ha'Zfira might have had the first mention of chess in the Hebrew press in the world. We now add an earlier occurrence -- because the newspaper used the older term nardshir (see previous post for more details on the term) instead of schachmat, (or schach-mat) as the Hebrew term for 'chess'.

It is an article about the game and its history. Written long before modern chess sholarship, the author  - signed 'Z. Scherschewski', presumably the Hebrew writer Zebi Hirsch Scherschewski -- assumes nardshir is chess, and even claims it is named thus 'after its inventor, Nassir Daher'  - but the editor adds on the same page a skeptical footnote, given below, that 'in context, it does not seem nardschir is the game of chess', nardshir in the Talmud being mention in context as 'an easy game that only women play'...

We believe the above is the earliest mention of chess in the Palestinian press, courtesy of the Historical Jewish Press site, found above. It is a translation of Israel Zangwill's short story (1895), 'Maimon the Fool and Nathan the Wise' (first photo). In this dialogue between the two Nathan notes that he met prof. Gotold (ph. spelling) for the first time 'in the game of nardshir' - the translator's word for Zangwill's 'chess'. It was published in Ha'Zvi, an early Hebrew-language newspaper in Palestine, edited by Eliezer Ben-Yehuda.

We note that 'nardshir' appears in the Talmud (Ketuboth 61:2). Rashi, the famous medieval Talmudic commentator, translates 'nardshir' mistakenly as 'Ishkashish' (אישקשיש) -- from the medieval French eschecs. Thus both 'Ishkashis' (or variants such as 'Ishkoki' or 'Ashkaoki') and 'nardshir' are sometimes used for 'chess' in Hebrew literature, before the term 'schachmat' (שחמט) -- also mentioned by the translator -- became by far the most popular term.

There are earlier mentions of chess in the Hebrew press -- e.g., in the Ha'Zfira (Warsaw), noted in this blog here and here. But Ha'Zfira and other papers which a propos mention chess I have found from this time have been published outside Palestine. 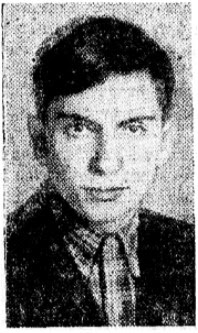 For a quick snapshot of chess politics in the very early state of Israel, we can note Ha'Boker from 1950: it notes that Oren, Rabinovich-Barav, Gruengard, Amihud Weinstein, Yochanan Ya'akovi, and Israel Rosenfeld were elected to the management of the ICF, and notes that soon the (first) Israeli championship would take place, including (oddly) 'strong players from abroad' as well as 'the master Czerniak which had just returned from Argentina'. No 'strong players from abroad' played in the Israeli championship, needless to say, nor would they have been eligible to play. But Czerniak did indeed play, scoring a disappointing 5/13 , for 12th place out of of 14. (Source: e.g., Hon's Ptichot Be'Sachmat [Chess Openings], 3rd ed., Tel Aviv: 'Schach' publishers, p. 91).
פורסם על ידי Avital Pilpel ב- 9:46 AM No comments:

Chess and Movies -- with a Twist

Chess in the movies is hardly a new thing, as the Chessbase article from which this photo is taken shows, for example. But the same Ha'Boker article we noted in the previous post, reporting on the international tournament of 1958, above has a twist on the usual connection. The article complains about the short draw S. Burstein - Dunkelblum, noting that Dunkelblum 'is not eager to make an effort' in the tournament's games', and that Burstein 'was seen in the late evening standing in line for a movie in the Mugrhabi movie theatre', at the time one of the busiest theatres in Tel Aviv...

Chess on the Radio (and on the Front Page)

A frequent correspondent notes that another instance of chess on the radio can be seen in Ha'Boker reporting (on the front page) about the international tournament in 1958. It notes that tonight (11/11) at 19:35 there will be a radio report in Kol Israel ['Voice of Israel'] about the tournament, by Shmuel Rosen and David Klein.
פורסם על ידי Avital Pilpel ב- 8:44 AM No comments:

We already noted in this blog the start of what is above called the 'cities chapionship' between Jerusalem, Haifa, Tel Aviv and 'the settlements' in 1939, i.e., the Weiz cup. A frequent contributors notes that in 1939, Ha'Aretz reports, the championship (again) took place in the Lasker club, Haifa didn't play, and Tel Aviv won the championship. Individual results were given as well.
פורסם על ידי Avital Pilpel ב- 9:06 AM No comments:

Marmorosh had promised, in the April 14th column, to give a detailed report of the tournament the next week. This he did. Below the photo -- showing, right to left (seated) Mrs. Schwarzman, Zelmenitzka, Nachmani (both ph. spelling), Dr. Labounsky, Porat, Marmorosh, Zerodinzki (ph. spelling; club manager), Winz, Blass, Kniazer, Mrs. Binfeld (ph. spelling) and Ya'akov.

Highlights from Marmorosh's report are that Rabinovich-Barav (then in Haifa) and Porat (then in a Kibbutz in the north) were elected 'honorary members' of the Lasker Tel Aviv Club. Other highlights note there are now 130 members in the club, that there were more than 1000 visitors during the tournament, and that 'interest in the women's tournament did not flag, despite the amazons' flagging game'.

Like many of his generation, Marmorosh just counldn't take women's chess seriously, Graf and Menchik's achievement notwithstanding.
פורסם על ידי Avital Pilpel ב- 8:55 AM No comments:

A frequent correspondent notes the announcement of the 1939 Passover activities in the Lasker club in Tel Aviv, 1939. Not only did it include a master's tournament (won, eventually, by Porat -- see, for a crosstable, e.g., Hon's Ptichot Be'Sachmat, [Chess Openings], 3rd ed. (1965), p. 89) but also, for the first time, a women's tournament. This was not the same as a women's championship (which had not occurred until the 1950s) but this is still a first. The results were reported two weeks later, on 14/4/1939 (p. 3):

The famous game Winz- Czerniak (Lasker club championship, 1939) had been reprinted often. A frequent correspondent now found the original publication -- in Marmorosh's Davar column. The column, with Marmorosh's annotations, end with the exclamation -- 'one of the most brilliant games ever played in the country!'.
פורסם על ידי Avital Pilpel ב- 8:23 AM No comments:

Above is (part of) a window from a new online chess analysis, from an Israeli start-up called "Decode Chess". As the name implies, the idea is to "decode" chess games into human language, looking at threats, good moves, plans, concepts, etc. Give it a look!
פורסם על ידי Avital Pilpel ב- 8:14 AM No comments: