Moshe Roytman notes that the correct pronunciation of the name of the person who was responsible for chess for the blind is probably Jacob Aizikowitz (יעקב אייזיקוביץ) and not "Itzkowitz" as I called him in the previous post (now changed).

In Roytman's 1983's edition (as he points out to me), as well as in my 1964 one (Tel Aviv: Mofet Press, 1964), his name is spelled Aizikowitz in English (p. 20), and appears with a photo of him -- clearly the same one as in the newspaper given in the previous before, only of better quality: 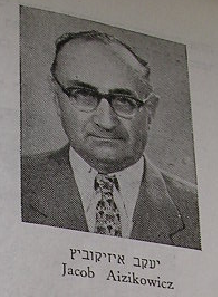 The 1964 edition also has a short capsule biography (p. 65): 'Born in Poland in 1898, emigrated to Palestine in 1927. A clerk in the Haifa municipality. Began to be interested in chess in 1914 and in problems in 1955, especially two-movers. Recently [written in 1964 -- A. P.] became interested in promoting chess among the blind'. Presumably the later edition includes his death date.

Shachmat, vol. 11 no. 7-8 (131), (unfortunately my copy doesn't have the exact page number), has an English-language obituary of him -- incidentally, on the same page as a shorter (Hebrew-language) "double" obituary for Leonid Shtein and Folke Rogard (click on image to enlarge). It too uses the same photograph of him: 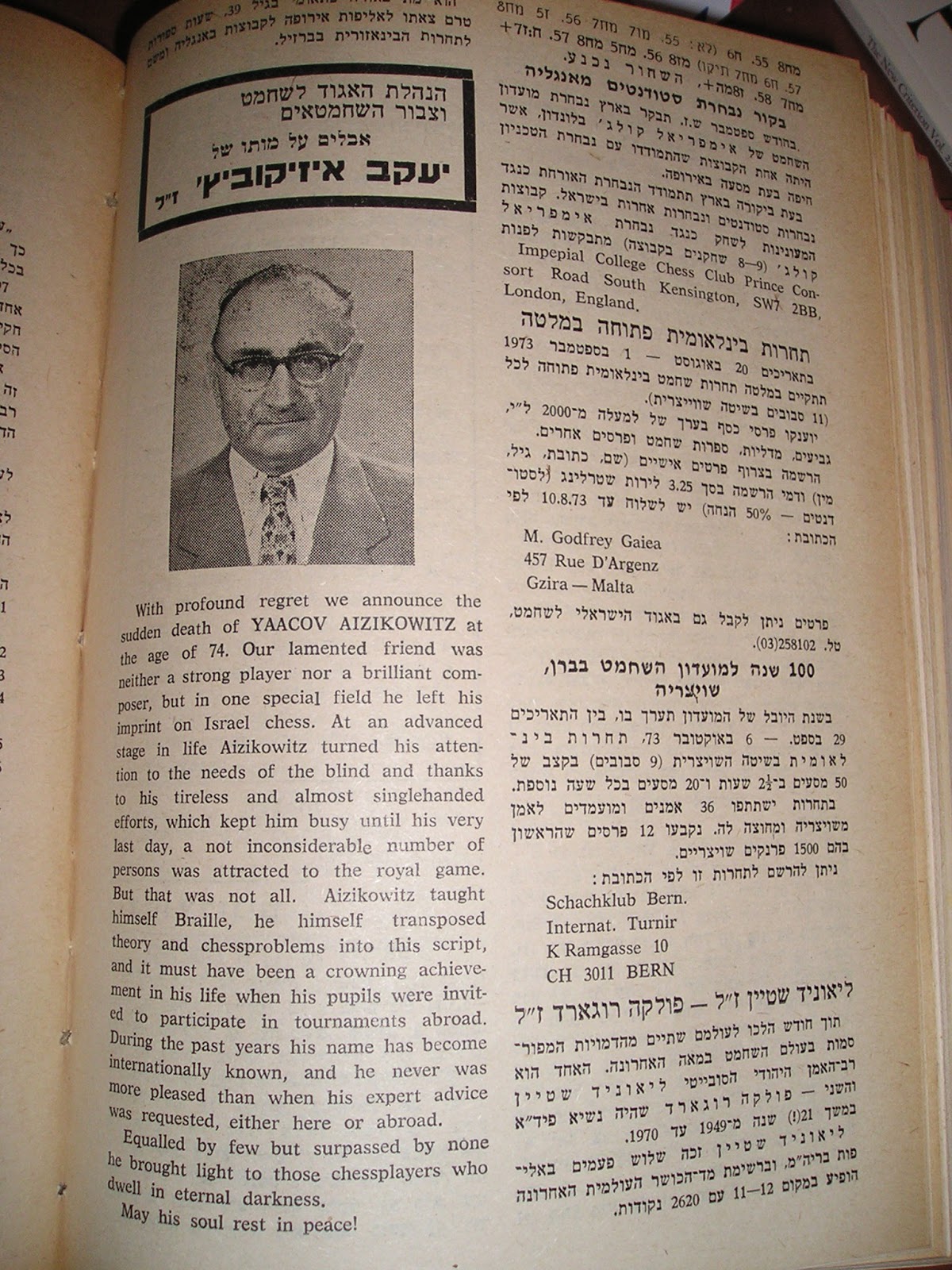 The Establishment of Chess for the Blind in Israel

Moshe Roytman refers us to an article in Davar (see above) about the person in the above photograph, Jacob Aizikowitz [Spelling changed from 'Itzkowitz -- see post of 21/2/15 above] -- from Haifa, who -- the article [in Hebrew] notes -- raised the number of blind players in Israel from six to 50, and was hoping to reach 100 (out of a total of 700 blind people in Israel at the time).

Another article noted by Roytman, substantiating what the original article says, are from Davar, 10/8/1962 [link in Hebrew] about the just-finished first blind chess championship in Haifa, noting it was organized by 'M. Aizikowitz' (presumably a typo) and, interestingly, explicitly notes some of the contestants were 'minorities' (i.e., Arabs). Incidentally, Roytman notes chess sets for the blind were first sold in Israel in 1961 in the first shop dedicated to accessories to the blind, as Davar of 25/6/1961 (p. 2) notes [link in Hebrew].

The article notes that, in the few years since he decided to dedicated himself to developing chess among the blind, he arranged simultaneous displays for the blind with Bleiman (then the Israeli junior champion), as well as Porat, Czerniak, Aloni and the Portugese player Durao, arranged a national championship to the blind, published studies, lessons, and problems (in cooperation with the Israeli problemist association) in publications for the blind, and so on.

An internet search found out something quite interesting about this man. Meir Shalev, the Israeli author, gave a recollection of his meeting with Prof. Dror Sade, the physicist [link in Hebrew], on the occassion of the recent Israeli 'Teacher's Day'.

Sade recalled that he had a teacher named Jacob Aizikowitz in Haifa as an elementary school student. He was a science teacher, but, for an entire year, only taught them about one plant -- the Mimosa Pudica. They grew the plant in school, took care of it, took field trips to see it in its natural habitat, etc., etc.

Sade, who was responsible for taking care of the plant in the evenings, noted that its leaves close differently during nighttime than during the day; Aizikowitz checked, found out this is a novel scientific discovery, and had it published in a scientific journal.

Naturally, notes Sade, he was fired at the end of the year -- for not teaching them the required syllabus. But he taught them something much more important, the love of investigation and discovery, Sade gives Aizikowitz credit for the fact that of the eight children in that 3rd grade in 1943, two became professors, three engineers, one a jurist, and the two girls in the class, teachers -- at the time practically the only way for a woman to gain higher education at all. This, it should be noted, was in an era when higher education was rare in the country, and even a high school diploma was uncommon.

While Sade or Shalev do not mention chess, it seems like a good bet -- based on the location (Haifa) and thoroughness of Aizikowitz's actions in both cases, that we are speaking of the same person.
פורסם על ידי Avital Pilpel ב- 9:23 AM No comments:


On the subject of chess and other arts, one should note the Persian poet Ferdowsi, who is not only considered Persia's greatest poet, but also wrote about the history -- or rather legednary history -- of chess.

In  his famous Shanama he tells the famous legend of chess being invented as 'war without bloodshed' to tell a queen that her son had died in battle, and the inventor of chess asking, as his reward, for one grain of wheat on the first square, two on the second, four on the third, etc. -- the total being 2^64 -1, or about 460 billion tons of wheat. (Source: Murray's History of Chess, Ch. XII, 'Invention of Chess in Muslim Legend').

Murray adds in the same chapter by that all early Muslim writers on chess openly admitted the game was invented in India and set the story of its invention there. Still, some, perhaps out of national chauvinism, argue that Ferdowsi's term Hind refers not India but the eastern part of the Persian empire, making the game "really" Persian.

We doubt it; it was popular scholarly opinion in China that chess is "really" a Chinese invention, in the middle ages chess' invention in Europe was attributed to various classical or biblical figures such as Solomon or Achilles; a Jewish 19th century player, Alexandre, attributed it to Moses; and so on. But we digress.

The above problem is given by Fasher as having been composed by Ferdowsi in Shachmet Le'Hana'atcha (Chess [used as a verb! - A. P.] for Your Enjoyment), p. 125 of the second (1980) edition. Both the rook and the king, as is well known, moved in the same way even during that time.

The problem is that we have not managed to find any other source attributing this problem to Ferdowsi. Murray's History of Chess has almost 600 problems of Indian (Chaturanga) or Muslim (Shatranj) chess, but none of them fit this diagram; nor is Ferdowsi credited there with composing chess problems. What is Fasher's source?

Solution (annotations and punctuation by Fasher):


The above video, or rather audio, was brought to our attention by Yochanan Afek. It is also available on his Facebook page. It is is Chava Alberstein's version of Shachmat [Chess] by Hanoch Levin. Alberstein is a famous Israeli singer with a long and distinguished career. Afek's web site also links to videos of the same song by Yehuda Poliker and others.

Many chess players were related to music. Philidor, of course, was a professional musician. Richard Reti's brother, Rudolf Reti, was a professional pianist and composer; Smyslov was an excellent singer; and so on. Conversely, many musicians (such as Prokofiev) were strong players. As usual, Edward Winter has the "goods" on lesser-known examples, in his article Chess and Music.
פורסם על ידי Avital Pilpel ב- 7:54 AM No comments:

In February, Jerusalem is supposed to host the 2015 European Individual Chess Championship. Yochanan Afek's Facebook page calls the event the strongest tournament in Jerusalem in "3000 years".

Afek, of course, knows very well that the game is not nearly that old, but his tongue-in-cheek description is understandable, since the tournament participants list currently has 172(!) titled players (out of 249), of which no less than 115(!!) are GMs.

It is true that the title had suffered significant inflation (from 50 GMs in 1957 to over 1000 today) but nevertheless having over 100 GMs in one tournament is a very significant achievement. Does anybody know what the record for the number of GMs in an individuals' (as oppose to team events like the Olympiad) tournament?
פורסם על ידי Avital Pilpel ב- 7:33 AM No comments:

A Correction about Dr. Saidy's Alleged Remarks in Natanya, 1973.

In a previous post, we mentioned an alleged incident between Anthony Saidy and Ludek Pachman in Natanya, 1973, in which Dr. Saidy remarked that communism was theoretically better than other economic systems, and Ludek Pachman took offense.

Dr. Saidy informs us that he does not recall such an incident, nor does GM Lubomir Kavalek, who was also present. He adds that he had never supported communism, and in fact is on record strongly opposing it. His views on the subject are amply laid out in his book 1983.

We have deleted the original post, and thank Dr. Saidy for bringing this error to our attention.
פורסם על ידי Avital Pilpel ב- 4:05 AM No comments: