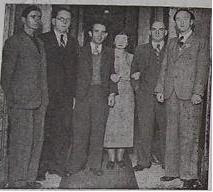 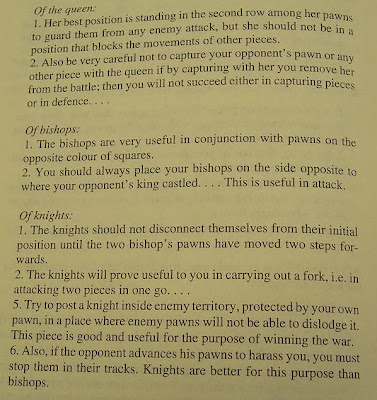 Found here is the first (to the best of my knowledge) mention of Botvinnik in the Jewish press, Davar, 3.12.1931:

In the large tournament in Moscow that ended in November, the young Jew Mikhail Botvinnik (Jewish) (sic). 80 of the best players in the USSR took part. Botvinnik, which won 13.5 out of 17 points, was crowned 'USSR Chess Champion' and won a large cash prize. Second was Riumin and third Verlinsky (Jewish).

As can be seen by the (over) emphasis on the players' Judaism -- the word 'Jew' or 'Jewish' is mentioned four times, once redundantly, in a three-sentence article -- the Jewish press in Palestine at the time was rather overly patriotic...
פורסם על ידי Avital Pilpel ב- 2:47 AM No comments:

From an interview given to the Israeli press, January 1961 (the same source as the 'third interview' in the previous post on this blog):

In 1939, the war broke out. I could not go home. All connection with my family was lost. So I decided to do something that would make me world-famous, so they will read about me in the paper... It took 24 hours. Afterwards I was so stressed, I couldn't sleep for three nights.

One wonders how serious Najdorf was with this statement.
פורסם על ידי Avital Pilpel ב- 1:04 PM No comments:

Miguel Najdorf was well known for his stories -- not all of them necessarily strictly true. Here are some stories he told Davar, in an interview published on 30.12.1960:

The secret of my success? You need a Jewish head. Most of the great chess players are Jews, I too am a Jew.

I wrote three chess books, but if you ask me what I've read about chess -- very little, practically nothing.

How do I play so many blindfold games? .... I have excellent visual memory. In 1946 I played in an international tournament in Prague. I met a Jewish girl and she invited me to her apartment. We took the subway, then a bus, then continued on foot in some suburb for over half and hour, and then reach a building that looked just like all the rest in the area. I didn't know her name or the street's name. Seven years later, I was there again, and decided to visit her. I took a subway in the direction I remembered, got off at the same stop, took the bus, reached an apartment -- and an old woman opened the door. 'Didn't a Jewish girl live here?', I asked. 'Yes, she moved to New York, here is her address.'

When the 1939 Olympiad began, war broke out. My situation was very difficult. I didn't want to return to Poland -- I knew that would be suicidal. A friend offered me to be a 'mnemotechnician' -- to appear in a show as a man with a prodigious memory. People wrote ten, twenty, and more numbers on a piece of paper. I would look at the paper for a few minutes and write the numbers down from memory. I made a lot of money in these shows, but it was a crippling effort.

One cannot make a living from chess. I worked in insurance, and now have my own important / export company. Once the game saved my life -- when I was in the Olympiad in Argentina instead of Poland. But apart from that, the only thing I gained from the game is to see the world. For me chess is just a hobby and even a very expensive hobby, for it takes much time. If I had more time for it, I would surely have been a better player, and could play in all the international tournaments. But what can you do? One must make a living.

In another interview (from the same collection of press clippings from Late 1960-early 1961 in the Israeli press as the previous post -- see "Najdorf in Israel I" below, no exact date or paper given), he told the reporter that in one of his blindfold displays, he was politely asked by one of the contestants: 'Excuse me, Herr Grossmeister: would you mind if I use a pocket set?'

In a third interview (same collection as clippings, no exact date or paper), Najdorf, in a less serious mood, quips about his 'last visit to Paris' and several other matters:

Chess is a Jewish art. In every international tournament, the "official" language is Yiddish. Most of the Soviet team, for example, speaks Yiddish. Even Euwe, a Dutch gentile, once told me, 'Najdorf, redet mama loshen' (Najdorf, speak Yiddish.)

I am bald because in every time I play a game of chess, I lose one hair.

Mr. Najdorf said that when he started his exhibitions in Israel, it seemed to him he would easily win all the games due to his opponents' lack of theoretical knowledge. But as the games went on, he found that sometimes he cannot find the way to win, and even loses. He believes that if the Israeli players had more theoretical knowledge, they would do better in the Olympiads.

Najdorf in Israel - I 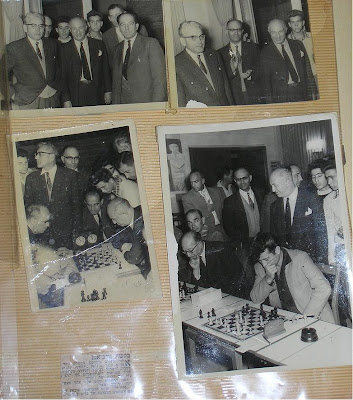 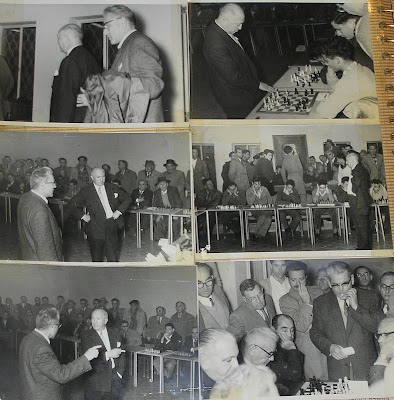 The photographs above are from Marmorosh's collection. Numbering left to right, top to bottom, some observations. Based on the clothes, time on the clock in the 3rd photo., etc., the first four photos are from the blitz tournament. Photo number 1 shows Marmorosh, van Amerongen (partially hidden behind Marmorosh), Najdorf, and Pe'er. Photo no. 4 shows Guti thinking while Najdorf is looking over his shoulder. Photos 5-9 show Marmorosh accompanying Najdorf to one of the simultaneous exhibitions. (Photo no. 10 is unrelated to Najdorf.)

Sources: this entry was culled together from press clippings collected by Marmorosh's son and daughter in their personal albums. Not all the press clippings have exact dates, or even the paper's title, hence the "roughness" in the dates of the simultaneous exhibitions, etc. The identified sources include:

Spelling: Except for van Amerongen, Smiltiner, and (of course) Najdorf, whose spellings are following Gaige's Chess Personalia, all names are spelled phonetically.
פורסם על ידי Avital Pilpel ב- 10:09 AM No comments:

The headline above, printed in Davar's chess column (March 30th, 1933), says, "Lasker on Chess Among the Jews". It is a transcript of a lecture given in the Hochschule für die Wissenschaft des Judentums in Berlin by Emanuel Lasker.

1). Jews consider 'individual expression' and originality the most important thing in chess, due to their habit of pilpul (sharp analysis, hair-splitting) over the Talmud.

3). The Jew is naturally not a warrior, so he has little interest in 'beating the opponent' for its own sake, but rather is interested in neutralizing the opponent or making him no longer an opponent (lit. 'making the hater no longer a hater' in the Hebrew-language column) by way of logic and analysis.

4). The Jew which won the game is happy, not for defeating the opponent, but due to successful execution of his plan, which was forced on the opponent by logical, necessary steps.

5). The Jew is a master of defense 'to a degree that non-Jewish players can rarely reach'. The reason is his long experience of having to defend himself from antisemitic hatred, for his very survival.

6). This experience allows the Jewish player to create saving defensive combinations 'based not on calculation, but on intuition' in the most dangerous moments.
פורסם על ידי Avital Pilpel ב- 11:13 AM No comments:

In a new book about Victor Winz -- chess player, scion of a prominent zionist family, gambler, wanderer -- the main question of all those addicted to the game is stated by the author, Jodi Bonells:

English translation (google translate's and my very broken Spanish -- might have some mistakes, but not on the main point...):

The narrator, a university professor of Hispanic literature and novelist, lover of chess and, for a time now, running marathons, uncertainly attempts to reconstruct the history of this German Jew, also a chess player, whom he met in Nice in the seventies, establishing with him, especially after his death, a strange master-disciple relationship. Chess thus becomes the common thread of their own paths, marked by a single, insistent and paradoxical question: how to learn not to play chess?