Why would he donate an old chess set to the memory of his parents and family? Because, the signs in the photo explain (the bottom sign is illegible in this picture) this is the very set they played on until they were shipped to Auschwitz, where they were murdered in 1944. 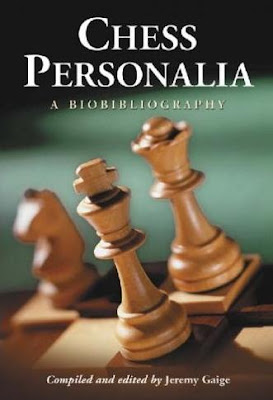 The recent death of Jeremy Gaige, the world's best chess archivist, is deeply felt by the chess historians' world community. Edward Winter notes, in his usual meticulous style, that Gaige had (inter alia) a 'thoroughly international' style in his collection of data, by no means limiting himself to English-language sources.

This is indeed so. Very often I relied on Gaige for information about many Israeli (or Palestinian, or Jewish) chess players, including ones that are extremely obscure and unknown by most Israeli players today. May he rest in peace.
פורסם על ידי Avital Pilpel ב- 10:42 AM No comments: