Gdali Roisman brings to our attention the following suggestion 'for a new array'. It was published in Shachmat vol. 6 no. 3 (March 1967), p. 102. It was the suggestion of Meir Rom, and given the same reasons as other such suggestions, to wit, the "theory death" of chess.

Rom offers the new array tentatively, and suggests that players 'who are sick of playing by the book until the 20th move' will benefit from it. He notes the array doesn't change the rules (apart from the abolition of castling) or pieces, thus not requiring a change in middlegame or endgame strategies, or the production of new sets. The castling move is, of course, canceled in this array, but there are no other changes to the rules.

The array is interesting, being deliberately asymmetrical. presumably, to give play a more tactical, castling-on-opposite-sides character right from the start. The rooks and bishops, too, seem to start in a prima facie better, more active, position than in the orthodox game. This is unlike most suggestions for unorthodox starting positions, such as Fischer's "random chess" suggestion.

By the way, Tim Krabbe and others noted (though I cannot locate the exact place right now) that Fischer was hardly the first to suggest such a new array. Bronstein, Gulko, and others did, as well as Maarten van 't Kruijs in the 19th century, and the idea (as the article in the link notes) goes back further, to the 18th century. Van 't Kruijs was unorthodox in more ways than one: the "reverse French" (1. e3) is called the van 't Kruijs opening.

Such randomization comes readily to mind for those who wish to create a chess variant, as it requires no new rules, pieces, or boards, and is very easy to set up once the idea occurs to one. I won't be all surprised if Arabic (Shatranj) or even Indian chess was occasionally played in such a randomized fashion, for variety's sake.
פורסם על ידי Avital Pilpel ב- 9:22 AM No comments: 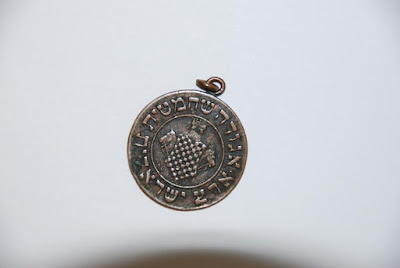 Prof. Shaul Ladany (whose life story, in the linked Wikipedia page, is well worth reading) had sent me a photographs of this medal from the 2nd Maccabiah.

As instances of public use of the Palestine Chess Federation's logo seem to be rather rare (see, for one such use, this post), this is certainly a significant find. Also, this medal, as well as the Zilbershats case noted in this previous post, strongly suggest that chess was an official field of competition in the Maccabiah. This was certainly what all chess books which mention the subject, as well as contemporary newspaper reports, say or imply.

However, prof. Ladany believes that this was never officially the case, and that his research has no mention of chess as officially being part of the 1935 Maccabiah. He believes "annexing" chess to the Maccabiah was one of the many cases (then as in the 1932 Maccabiah) of using the event as a formal excuse for immigration purposes, to allow as many Jews as possible to enter the country in the teeth of British restrictions on Jewish immigration.
פורסם על ידי Avital Pilpel ב- 9:14 AM No comments: 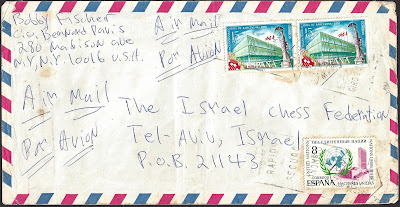 Above is a scan (both sides) of a letter sent by Bobby Fischer to the Israel Chess Federation, provided to us by Yoram Lubianiker. He adds that, while the date of the cancellation stamp is not clear, the stamp on the bottom right was issued in Nov. 3rd, 1970, which means that is the earliest date the letter could have been sent.

Fischer (after his participation in Netanya 1968) was invited to participate in a tournament in Israel by the ICF again, but politely declined, noting he is devoting all his energies to the conquest of the world championship. This, Lubianiker learned from person conversation from a source in the ICF which I also know, and who I know from personal experience wishes not to be named on the Internet.
פורסם על ידי Avital Pilpel ב- 1:54 AM No comments: