The international tournament that took place after the 1964 Tel Aviv Olympiad was planned at that date to take advantage of the fact that the world's strongest players are all going to be in the country in any case. But it was, of course, planned in advance with the usual invitations extended to specific players. The following article notes that 'excellent players were invited to the international tournament that will take place in Jerusalem after the Olympiad'. The fit between the players in the tournament and those of the Olympiad was naturally, not 100%: as we noted in the blog before, Abrahams, who didn't play in the Olympiad, played in the tournament.

A frequent correspondent notes that Davar reported, above, that the organizers wished to invite women's world champion Nona Gaprindashvili , a (somewhat) unusual case of a woman - if a world champion - being invited to an international "men's" tournament.
פורסם על ידי Avital Pilpel ב- 12:39 AM No comments:

Another photo found in the Dan Ha'Dani collection (see link in previous post) is the following candid photo of Liberzon playing Czerniak. Judging from the position on the board this is probably the game they played in the Be'er Sheva tournament, 1976.

The Dan Ha'Dani collection, which we have mentioned before, has many chess photos. Here is an informal, but flattering, photo of Judith Polgar, playing in the European Team Chess Championship in Haifa, 1989; photograph by Vered Peer.
פורסם על ידי Avital Pilpel ב- 10:57 AM No comments:

A frequent correspondent notes that another photo archive, Bitmuna (in the picture) has some Israeli chess pics. There are many photos of the (same) Spassky simul noted in this blog a few days ago, as well as photos of a Czerniak simul (one of which is above) and other chess-related material.

If you see a box with text at the bottom of the page it means you can press on it to load more pictures.
פורסם על ידי Avital Pilpel ב- 6:47 AM No comments:

As we noted, chess in the early 20s in Palestine concentrated in the large cities -- i.e., Jerusalem, Tel Aviv, and (a little bit) in Haifa, but that nevertheless there were exceptions. Here is one: a tournament that took place in Zichron Ya'akov. The paper reports that 'the tournament that took place between the local players before the Sukkot holiday' could not be completed due to the fact that some of the participants 'are travelling'. It notes, however, that Ksuhnir is the undoubted winner, with a current record of 10.5 our of 11 points.
פורסם על ידי Avital Pilpel ב- 6:02 AM No comments:

Chess simuls did not necessarily take place in chess clubs. One example is this simultaneous event, advertised by Daor Ha'Yom, which will take place in the 'Eastern Pioneers' Workers' Association club. The latter association was an organization of socialist oriental Jews (link in Hebrew).

The performer is 'the famous chess-player Mr. Sigmund Zehavi' (ph. spelling). I have not been able to find any information about this person. Does anybody know?
פורסם על ידי Avital Pilpel ב- 5:56 AM No comments:

One of the first matches - probably the first match - between two chess clubs in Palestine took place in 1924, when the newly-establishes clubs in Jerusalem and Tel Aviv played a match. Here, with local patritoism, Jerusalem's Doar Ha'Yom notes the 'total victory' of Jerusalem's Gordon, Pappo, Mohilever and Korn over Tel Aviv's Labounsky, Polano (ph. spelling), Weisel and Steinberg.  One wonders whether Tel Aviv's "Polano" is actually Polani, a member of the Jerusalem club in 1923, as players moved about quite a bit at the time.
פורסם על ידי Avital Pilpel ב- 7:58 AM No comments:

We noted in the past that in the 1920s and later, the "official" number of chess clubs was very small, and most chess activity was in less formal settings. One of the most important was Ha'Poel sport clubs. In this report, it is noted that Ha'Poel has branches in Tel Aviv, Jerusalem, Binyamina, Hadera, Zichron Ya'akov, Atlit, Afula, Nesher, Tiberias, Yavniel, Rehovot, Petah Tikvah, Magdiel, Kfar Saba, Kineret, 'and more'. It is added that 'apart from soccer', they are also involved with teaching first aid and 'various sports' - including chess.

This does not imply every branch of Ha'Poel had a chess club, but probably most did, chess not requiring much investment on the branches' part. We note that during the 1920s in particular, occasional notes in the press would point out the Ha'Poel club in a certain city is open to the public for, among other activities, chess.
פורסם על ידי Avital Pilpel ב- 7:47 AM No comments:

Official Announcement of the Opening of the "Lasker" Club, Jerusalem

The announcement of the opening of the "Lasker" chess club in Jerusalem, 1923, is quite interesting. The secretary of the club, E. Gottlieb (ph. spelling) notes the opening will be in the 'Beit Ha'am' building 'next week', with the following program: an opening speech by 'the pharmacist Y. Michlin (ph. spelling), the head of the club's committee' - followed by a simultaneous game by  [Shaul] Gordon -- one of the club's stronger players -- against 20 people.

The financial arrangements are of some interest: the free is three Egyptian pennies (1/100th of the Egyptian pound, commonly used in Palestine at the time). If the player wins, Gordon will pay him 'of his own money' three times as much, in the form of 'Shachmat journal for three months'. If he loses the three pennies go to 'the club's kitty'. This leads one to believe this simul was a fund-raiser for the club, not a way for Gordon to gain any money.

The report adds the costumes - Jews vs. Romans - were very good, and the 'game manager' (i.e., player), Ben Hanoch, playing the Jewish side, had (unsurprisingly for such displays) defeated Harrari, playing the Roman side. The report adds, however, that for most of the spectators the game 'remained unclear, unfortunately'. 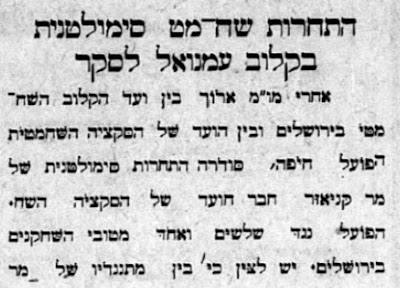 How strong -- or weak -- the players in the Jerusalem "Lasker" club were in the 1920s can be seen by the fact that when Kniazer from Haifa gave a simultaneous display in 1926, he defeated most of the club's top players such as Mohilever, Vogel, and Polani and only Pappo managed to draw. This note was brought to our attention by a frequent correspondent.
פורסם על ידי Avital Pilpel ב- 6:46 AM No comments:

We have sent information to Edward Winter about a Boris Spassky simultaneous display in Israel, 1964, and he had graciously published it in his well-known Chess Notes (#11513). All details about the photographs and credits for finding them is to be found in the link.

We add that the Spassky simultaneous display was in Ein Harod on Saturday, Nov. 28th, 1964, according to an article in Kol Ha'am (Nov. 23rd, 1964, p. 3), which lists all of the simultaneous displays the USSR team was planning to give while in Israel.
פורסם על ידי Avital Pilpel ב- 6:40 AM No comments:

The game given above was played La'Merchav readers (White) and Euwe (Black). It was played by  telegraph at the rate of a move a week, between Nov. 10th, 1961 and June 7th, 1962. It was published in La'Merchav's chess column. La'Merchav's readers chose White's move by vote, with the editor (van Amerongen and Z. Shomron) allowing himself to intervene in case the readers recommended a obvious blunder, but there was no such case.

The game was brought to our attention by a frequent correspondent, who notes that he himself played as a reader of a youth's magazine in a similar game ageist Tal.
פורסם על ידי Avital Pilpel ב- 5:59 AM No comments:

In this position, Euwe (playing Black) offered a draw, which was accepted by White. What was the occasion and what's the relationship to Israeli chess?
פורסם על ידי Avital Pilpel ב- 5:44 AM No comments:

In reviewing the chess life in Palestine in 1930, Davar notes that there is 'little to be done at once' with the 'limited' chess life in the country. The article - 'The Akiba Rubinstein Chess Club in Tel Aviv' notes, however, that Marmorosh founded the club with in order to revive chess in Palestine. The article notes that the club now had over 100 members, and that Rubinstein himself sent a polite letter to Wilson, the secretary of the club, agreeing to naming the club after him. It is quoted above.

The especially interesting point is that the letter was written originally in old-style, turn-of-the-century Hebrew, the Hebrew Rubinstein learn in his youth. Rubinstein notes he got Wilson's letter from '4th of Tishrey' [The Hebrew date] and that he is willing to have the 'Ishkoki' [chess] club named after him. Rubinstein also notes he wrote previous articles for Ha'Sachmat in Hebrew but that the magazine did not survive. He politely refuses to send articles, citing lack of time, but promises to send 'interesting games' if he happens to play any, and to come visit to give simultaneous displays. Indeed, he did just that a few years later.
פורסם על ידי Avital Pilpel ב- 5:22 AM No comments:

Gil Hovav, an Israeli presenter and chef, gave a short feature about chess in Israeli TV, on his show 'Game Theory' [Torat Ha'Mishakim, תורת המשחקים] in 2017. The video (mostly in Hebrew) includes an interiew with Kramnik, Gelfand, and also mentions chess boxing and has Hovav losing with a fool's mate (presumably deliberately) to a chess player in Union Square.
פורסם על ידי Avital Pilpel ב- 4:49 AM No comments:

The same frequent correspondent notes that Eliyahu Fasher reports in a long article in La'Merchav on the government's agreement, due to the great success of the Olympiad's preparation, to donate another 100,000 Israeli pounds to the proejct. Fasher notes that chess is Israel's 'top sports export'. The article also has a good quality photo of  Zadok Domnitz.
פורסם על ידי Avital Pilpel ב- 4:35 AM No comments:

Chess on the Radio

A frequent correspondent notes that Yosef Porat was on Israeli radio in 1964 -- 'with his return as a winner from an international chess tournament that took place in Mongolia'.
פורסם על ידי Avital Pilpel ב- 4:26 AM No comments: