Political Leaders and Chess -- Does Anybody Know What Became of this Suggestion?

Does anybody know what became of this suggestion, or of Shimon Peres's alleged exemption from it? I am quite sure nothing became of it. By the way, the reference to Elijah Williams is presumably to the slow-moving 19th century British chess player, not the American football player.
פורסם על ידי Avital Pilpel ב- 11:59 AM 1 comment:


We have already seen -- here and here -- that David Ben Gurion, Israel's first prime minister, was interested in promoting chess, not so much as a player (he was a very weak player, to judge by the position in the photo of him actually playing) but as a Zionist Enterprise, a healthy past time for youths and a source of pride for the country when it achieves good results abroad.

Above is a copy of a letter sent by him to Israel Eshel, at the time the head of the Israeli Chess Federation, sending his hopes for success to the Israeli Students' team for success in the Student Olmypiad, which, at the time of the letters' writing, was about to begin in Haifa. This letter too emphasizes how Jews have been partial to chess for 'thousands of years', how it shows man's intelligence, etc.

The full report of the students' Omypliad was given in Shachmat's previous issue (no. 9, 1970, pp. 224-226), by the captain, Malkiel Peretz. He noted sarcastically that most of the players have unsolved exams or work issues -- 'interestingly, these problems are always solved when we play abroad'. But, on the whole, the team did quite respectively: 4th place, after England, Germany, and the USA; the Soviet bloc, for political reasons, did not participate. Peretz notes that Ben Gurion's letter was read in the closing ceremony.

It should be noted that by far the best player for Israel in the event was the 'Vilan Gaon', Bleiman, which we have met before in this blog.

Poland had developed quite a collection of excellent chess historians, which do serious research and bring to our knowledge a lot new information about unknown periods in chess history (see C. N. 8204), or of obscure players who should be better known, and much more besides.

The book is divided into four parts: a biography, which is very detailed, and in particular, investigates his early life, family history, education, and murder by the Nazis, as well as the better-known periods of his life. It includes many rare photographs -- including, inter alia, copies of his school record, and a color plate of his mother's gravestone. The second part is a collection of articles from numerous sources, mostly contemporary, by or about him. The third is a selection of 53 deeply-analyzed games. The last part is a collection of what he was most famous for: 160 problems and studies. Naturally, the original sources for all historical material used are given in detail. No unsourced 'Przepiorka had once...' stories here!

I.e., Black now has to move, and he is -- to use the players', not the problemists', term -- in "zugzwang". That is, any move which ignores White's last move allows mate:

So Black must try:

Which is answered by

I apologize for the dropping of the accents from the Polish names in this post -- it is impossible to me to add them with the fonts available on my blog editor. At least, I don't know how to do it...
פורסם על ידי Avital Pilpel ב- 12:31 PM 3 comments:

Alla Kushnir, the top Israeli female chess players for many years, has passed away this Aug. 3rd. Both the Israeli Chess Federation and Tel Aviv University (both links in Hebrew) praise her highly. Why Tel Aviv University? Because that's where she served as a world-renowned professor of Numismatics after she had, in the late 70s, given up chess for the academic world.

Like Philidor, if we may make the comparison, she truly excelled in two different fields (music, of course, was Philidor's second field; indeed according to the Oxford Companion to Chess, he saw it as his true vocation, chess as a mere hobby). It is not often that we meet people who are world-class achievers in two totally different fields.

Among her chess achievements were to play three times in a match for the women's world championship (losing to Nona Gaprindashvilli) and once in the (women's) candidates' final (losing to Maia Chiburdanidze). She also won the gold medal with the Israeli team in the 1976 Olympiad in Haifa, with a nearly clean score of 7.5/8, astonishing even considering the fact that the eastern block, for political reasons, did not participate. Her overall Olympiad record (in three women's Olympiad -- the 4th, 5th, and 7th -- for both the USSR and Israel) is the equally impressive +21 =4 -0.

A frequent correspondent of ours had noted that an extremely interesting interview with her in Davar (from which the above photo is taken, link in Hebrew) has some interesting material about chess in the days of the "Iron Curtain". Among the more interesting questions:

Q: Is there a difference between "female" and "male" chess?

A: There were joint tournaments from the beginning, but once I started to play for championships, the sexes were separated.

Q: Was the separation, then, for no good reason?

A: Not exactly. Since there are 20-30 boys for every girl who plays, it's easier for a girl to reach achievements in the protected "women's only" field. This has traditional reasons. But it's not because women play differently than men -- it's just a matter of playing level. I, for example, can play with male masters in international tournaments; there is no difference, they make the same mistakes...

Q: Why was it crucial for your husband to accompany you to the [Women's] Interzonal in Holland, half a year ago? [Kushnir won both first prize and the best game prize there, as is noted in the Interview -- A.P.]

A: It was the first tournament where I would play Soviet players since I left the USSR. It happened before that when the Soviets were in a bad situation in such matches, they used real terrorism -- diplomatic pressure, various threats, and "nerve terror" -- which put the player in such a nervous state they lose because they cannot concentrate.

A: Phone calls in the middle of the nights, threats of the "when you'll come home we'll take care of you" if home is in a country behind the Iron Curtain, as they did to a Russian player which married a Bulgarian ... my husband worked for a year in the USSR ... he knows how to speak with them, if one has to.

In honor of her, we give here a game that caused quite a sensation at the time -- her defeat (as White) of Larry Evans in Lone Pine, 1975, being featured, inter alia in the July 1975 Chess Life and Review (the source for this claim is this blog -- I do not have a copy of this article -- with another photo of Ms. Kushnir). Allegedly, Bobby Fischer called Evans to ask him how such a fiasco could have happened -- although, like so many "Fischer stories", this one needs to be taken with a big grain of salt. 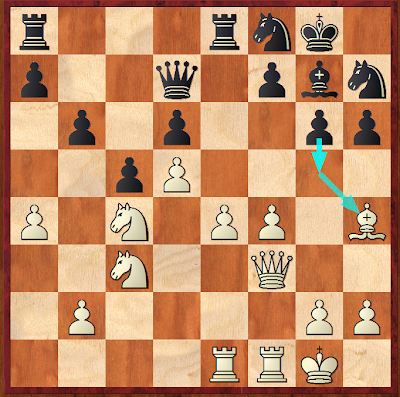 Fritz consider this the decisive mistake. 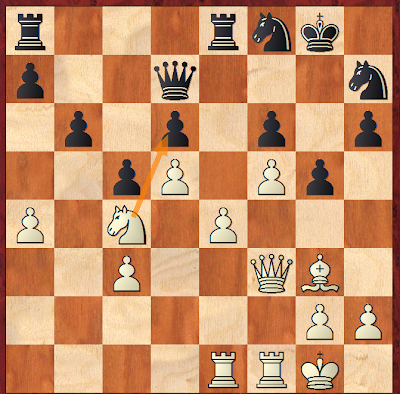 At first sight, this looks like the last nail in the coffin -- moving the queen away from the scene of the action, as well as allowing Black's obvious next move. In fact this is not a blunder, but played deliberately. Evan's plan is to liquidate the center at the cost of some material, hoping for a draw. However, Black was already lost according to the computer's analysis.

Trying to liquidate the center at the cost of material but, again, it's too late.

Fritz sees here a forced mate in 13, starting with 32. Rf5, which Kushnir "missed", but of course Black is lost in any case.

Who is the Warrior in "The Warrior's House" -- and Aloni's Involvement


One of the most active chess clubs in Israel for decades had been the chess team from "Beyt Halochem" -- literally, "the Warrior's House" -- the IDF's injured veterans' organization's headquarters. But what connection does this has to do with chess in particular?

A frequent correspondent to our blog noted that the connection goes back nearly 60 years. In 1956 Davar reported that a group of Independence War (the 1948 war) injured veterans, at the suggesting of some such veterans including (phonetic spelling) Dov Winer, Moshe Reshkesh, S. Lusky, Wexelbaumer and Avraham Or-Hayim in 1954, and that this year (1956) they will compete in the Israeli "B" league (one of only two leagues at the time, "A" and "B", noted our correspondent).

Of particular interest to Jewish chess history is that the trainer of the group was Itzchak Aloni, which we have met quite often in this blog, and that the article notes that they have 'made great strides in theory and play' under his tutelage.
פורסם על ידי Avital Pilpel ב- 9:49 AM No comments:


A frequent correspondent to our blog noted that in 1954, the ex-Israeli champion, Menachem Oren, played a simultaneous game in the Emmanuel Lasker club in Tel Aviv 'last saturday' (i.e., Dec. 11th) against 24 players, 'mostly youth of level Aleph [at the time, the rough Israeli equivalent of 'candidate master' or 'expert' level in other countries -- A.P.]. The result was (from Oren's point of view) +14 -4 =6. The interesting point? One of the winners, then a nine-year old, was Israel Gelfer -- currently FIDE's vice president and for a long time the holder of numerous important posts in both Israeli chess and FIDE.

He is, by the way, an FM with a rating of about 2350, as well as an international arbiter, international organizer, and senior trainer. All of these are, incidentally, are official FIDE titles showing real achievements and the compliance with stringent standards, not honorary descriptions.
פורסם על ידי Avital Pilpel ב- 9:35 AM No comments: