In a obituary to Aron Nimzowitsch published in Davar, 3.5.1935 (editor: Moshe Marmorosh), there appears a photo of Nimzowitch with his name signed in Hebrew letters. Apparently this is supposed to be his own signature in Hebrew (or Yiddish). It is almost certain that Nimzowitch, a European Jew, spoke and wrote Yiddish (and perhaps Hebrew), but are there other examples of his signature in this language?
פורסם על ידי Avital Pilpel ב- 1:26 PM No comments:

On 14.12.1951, Shaul Hon's chess column in Davar declared there will be a "chess duel" between Tel Aviv and the rest of the country. The gimmick -- the match will be transmitted on a special phone line between Tel Aviv and Jerusalem. The match took place over Hannukah 5712 (last week of December 1951). According to the 4.1.1952 report in Hon's chess column, the result was (Tel Aviv's team on the left):

So Tel Aviv showed its superiority over "the rest of the country". Hon gives the sharpest game -- Aloni - Czerniak -- in his 18.1.1952 column. As usual, a computer check finds some oversights but on the whole Hon's analysis is quite good. 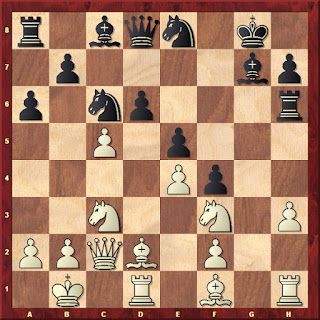 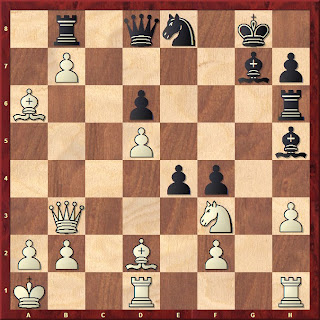 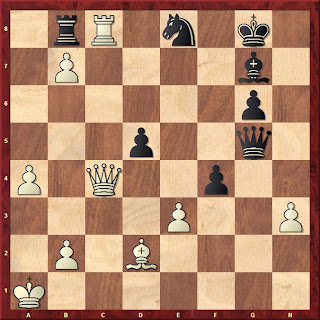 A Nice Combination by Shaul Hon


Shaul Hon, one of Israel's main chess organizers, authors, and all-around chess activists, was (as he would surely would have been the first to admit) by no means a weak player, but not a particularly strong one. He never, for example, played on Israel's national team in the Olympiad or won Tel Aviv's (or the national) championship.

But this does not mean he could not find good moves! Above is an ending (given in Davar's chess column, which he edited, on 27/10/1950 as "ending 78" from a game "played in September 1950") where White wins with a nice combination.

Raphael Persitz (1934-2009) was one of Israel's greatest natural talents. His first published game -- to my knowledge -- is the following victory over Avraham Labunski, Tel Aviv's champion, in the second round of the Tel Aviv Championship of 1949-50 (Jewish year 5710). It was played in the 2nd round.

I doubt there was a change in the editors of the chess column from Shaul Hon to anyone else, but, for the record, for a few months previously (and in this column as well) the chess column was unsigned -- nor was Hon given any credit for it anywhere in the paper (so far as I could find). Hon had often mentioned elsewhere that he is "in the army" as an excuse for delays. Perhaps at the time the column was done by someone else due to Hon being on active duty?

The reason for me wondering is that the annotations are a bit odd. First, it is true that in this line, unlike in some others in the Nimzo-Indian, 8. Qxc3 is less popular than 8. bxc3, but it is still playable (the motivation is, naturally, to not double the pawns as well as to keep the two Bishops, although here this plan is probably not the best.) Second, the annotator's insistence that, in effect, all of White's trouble come from "moving the queen too much" seems to me to be rather dogmatic. Third, taking the annotations as a whole, one wonders why, if White made somewhere between four and six bad moves up to that point, and wasted a third of his moves on Queen wanderings, Black only has "the initiative" (as opposed to a completely winning position) by move 22. (A computer check also shows Black has only a slight, though real, advantage after 22. ... Qc8.) Perhaps Hon was in the army and the annotations done by someone else?

My previous note that Wolf apparently didn't participate in any chess activities in Palestine or Israel was wrong. As Davar chess column (Ed. Shaul Hon) noted on 6/1/1950:


On Dec. 19th 1949 the old master Siegfried Reginald Wolf celebrated his 82nd birthday. In world chess today there are only two survivors which encompass three generations: Mieses (now 84) and Wolf.Wolf attacked chess with youthful enthusiasm from his childhood, and soon conquered and got first prizes. He played with the best players in the world and had good results. Even four years ago (at the age of 78!) he participated in a six-person tournament in Haifa, and if his stamina could not keep up with that of the younger players, his thought and chess knowledge made him a hard nut to crack to the other contestants.

Today, few people have herd of Siegfried Reginald Wolf. But, in his old age in Haifa, he was honored by the Israeli chess establishment (such as it was) at the time. One example is reported in Davar chess column (Ed. Shaul Hon) on 13, 20, and 27/1/1950.

Davar reports on these dates that the "Shemen" corporation had donated an "S. R. Wolf cup", and that various cities' teams played in the "Inter-city championship for the S. R. Wolf Cup" for it. On 14/1 and on 21/1, the Tel Aviv team won both its meetings with Rishon Le'Tziyon's team (3:2 at the Rishon Le'Tziyon club, 4.5:0.5 in the return match in Tel Aviv), winning(*) the championship (and the cup).

Davar mentions that in another match "three weeks ago" (20/1 column) Rishol Le'Tziyon's team defeated Jerusalem's team  "9:3" -- from the score, although it is not explicitly stated, it seems likely this too was a double match, part of this inter-city championship.

(*) or retaining -- the 13/1 column claims Tel Aviv already "holds" the cup, the 20/1 column that the match between the two teams is "part of" the inter-city tournament for the cup. It is not clear from the reports if the cup was offered in previous years.
פורסם על ידי Avital Pilpel ב- 4:04 AM No comments: