A Double Bishop Sacrifice and Czerniak?

Our chess tactics training program, CT-ART 3.0, has the following fragment, starting at the position in the diagram, from a game between Czerniak (White) and Saharovsky. Black won with a clever tactic (solution below). 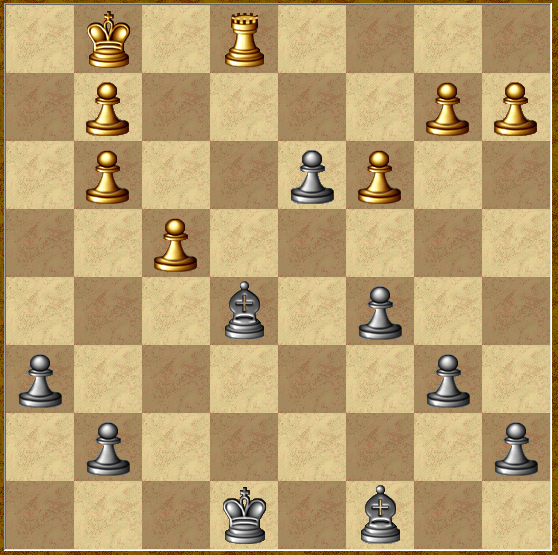 The problem is, this game is given only as 'Tel Aviv, 1963'. Neither the game nor the position appear in the "standard" databases, and there was no player named 'Saharovsky' in the Israeli championship that year.

This means the game was probably played in the Israeli league or in a club championship, or perhaps in a simultaneous exhibition. Does anybody have the complete game score?

This Blog Mentioned on Chessbase!

My blog was just mentioned by Yochanan Afek in an article for chessbase about the history of chess in Jerusalem. Needless to say Afek gave me and others full credit and even linked to my blog. I have met him a few times and he is, apart from being a very nice person, extremely knowledgeable about chess in Palestine and Israel, supplying me with rare material and information -- such as the definitive information about Czerniak's only study, his notes about his (Czerniak's) match with Najdorf, and much more. See the "Afek" tab in the blog (right) for the full details.
פורסם על ידי Avital Pilpel ב- 10:42 PM No comments:

From the same article by Fasher quoted below, an interesting claim: Van Amerongen's book, 133 Traps in the Openings [133 Mal'kodot Ba'Ptichot, Mofet: Tel Aviv, 1958] 'only has 132 traps (since one trap had caught the editor [of Mofet's chess books], who was Moshe Czerniak).'

Does anybody have a copy and can verify? Also, what trap did Czerniak, if this is correct, "censor"?

This makes sense, as Czerniak was not known as a "censor" of his defeats or for trying to make himself look invincible. Indeed, he himself published some of his defeats on various occasions, for example to Sonja Graf or to Capablanca (C. N. 5074).
פורסם על ידי Avital Pilpel ב- 2:33 AM No comments:

Eliyahu Fasher, the chess player, problemist, and organizer who was often mentioned in this blog, notes on pp. 6-7 of the October 1964 Shachmat (No. 3 (26)) a few interesting facts about early chess publications. First, he notes that Marmorosh's primer had first appeared in 1934, and that the current available edition was re-printed 'without the exact date'. This solves the "mystery" of the exact date of publication of that book.

He also notes that from the folding of 64 Mishbatzot at the end of 1958 and the founding of Shachmat in 1962, 'a Haifa-based amateur tried to print a chess magazine' which stood on a 'very low level and didn't last'. Similarly, 'Yochanan Sedger [ph. spelling], also from Haifa, brought out 11 chess pamphlets to the workers of the Paz [oil] company'. Does anybody have any of these 11 pamphlets?

Edited to add, 4/2/2015: Moshe Roytman, our frequent contributor, found the original notice about the publication of these pamphlets [link in Hebrew]. They were published in 1959 or 1960 (the notice is from Jan. 8th, 1960) and were mimeographed copies, not printed).

Fasher also praises, quite rightly, Eliyahu A. Mendelbaum and Raafi Persitz's book, Tacharut Amanim Be'Sachmat [Master's Chess Tournament], which -- he notes -- is very well printed and of high quality (I concurr), but made one odd mistake: it put (p. 27 of the 1953 edition) a picture of Mendelbaum himself -- who didn't play in the tournament -- with the caption 'I[tzchatk] Aloni'...

Finally, notes, Fasher, in 1958 the 'chess department [מדור] next to Ha'Poel's center' (est. 1958) published two books that same year -- Shahaf's book about the Moscow Olympiad and a series of 33 chess lessons translated from the Hungarian (!) by Levi Herzog and edited by Amiel Ha'rel. Does anybody have the latter book? In any case this shows the way chess was helped by the politics of the time, in this case, Ha'Poel.
פורסם על ידי Avital Pilpel ב- 2:22 AM No comments: