What is a Combination?


To add to Edward Winter's article about "what is a chess combination", there is an interesting definition given by Y. Aharoni [au] and Moshe Czerniak [ed] in the book Shachmat La'Mathchil [Chess for Beginners]:

"A combination is when, by the sacrifice of material, a unified action by a few pieces of the same side, forcing mate or loss of material or the deterioration of his position on the opponent... its qualities: it surprises the opponent, made up mostly of forced moves, and its height is when the 'point' of the combination is revealed."

"There is no combination without sacrifice of material, just like there is no bravery in combat without self-sacrifice. To the average player, the amount of material sacrificed determines the beauty of the combination. He who sacrifices a queen shows more bravery than he who only risks a pawn."

It should be noted that Aharoni does not claim that the beauty of the combination is in fact due to the amount of material sacrificed, only that this is something the 'average player' believes. Implied is the fact that this is not necessarily so for stronger players, but -- again -- the book is aimed at beginners.
פורסם על ידי Avital Pilpel ב- 4:52 AM 1 comment: 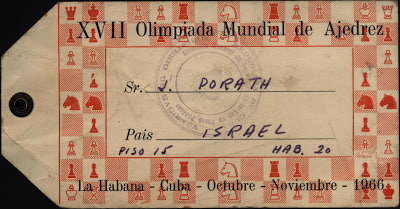 A short item this time: the 16th Olympiad (Havana, 1966) gave all players, naturally, a place in a hotel. An anonymous donor provides this photo of Yosef Porat's card. Apparantly he was given room no. 20, on the 15th floor.
פורסם על ידי Avital Pilpel ב- 11:13 AM No comments: