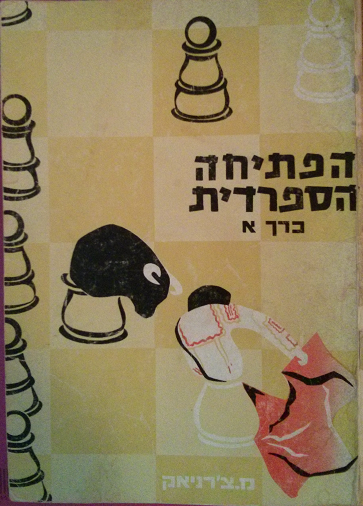 How many books exactly did Czerniak write? By 1976, his book about the Ruy Lopez has 16 previous titles, as the title flap show. Adding this book, and his book about Israel in the Chess Olmypiad (1979), this would make 18 titles.

Checking the 1979 book, incidentally, it transpires that there was no "Vol 2" of the Ruy Lopez book printed since 1976 to 1979 (and, I believe, ever). I chose to give this earlier book in the post due to the elegant cover art (I didn't find the artist's name in the book).

Czerniak reminds me much of Irving Chernev. Both wrote all kinds of chess books, from primers to game collections. Both were confident of their views, openly disagreeing with leading authorites' analysis, when he thought they could prove it was mistaken. Both were honest and hard working: they may have written some mediocre books, but never meretricious ones. All of Czerniak's and Chernev's books shows a lot of work, and most contain a lot of original material in analysis or history.

Gaige's Chess Personalia (at least, my reprint of the 1987 edition) notes, next to the Palestinian / Israeli master Moshe Blass, a "mystery" player known as Abram Blass, with no birth or death date, and the source being a Polish magazine from 1929. Internet sources such as Wikipedia or Olimpbase also mention 'Abram Blass'.

The wikipedia entry mentions him winning the 1935 Maccabiah championship. As this blog had previously noted, contemporary sources make clear that the person who won this championship was Moshe Blass, as he is always known in Hebrew-language sources from the 1930s on. E.g., Shaul Hon's Ptichot Be'Sachmat [Chess Openings] (Shach; Tel Aviv, 3rd Edition, 1964) mentions him as 'M. Blass' many times in tournament results from that period (including the 1935 Maccabiah victory, p. 85). Blass' obituary, by Moshe Czerniak, from which the photograph above ('The Last Prize') is taken, also names him 'Moshe' and mentions his 1935 Maccabiah victory and, inter alia, him winning the 1928 Warsaw championship -- which Wikipedia credits to 'Abram Blass'.

Clearly, Abram Blass and Moshe Blass were simply the same person -- and, probably, based on where he was known by which name, he changed his name from 'Abram' to 'Moshe' when arriving in Palestine in the 1930s.

Why? It is not clear.

One possibility suggests itself. He was -- as Czerniak notes (see exact biographical details in this post from our blog) -- an illegal immigrant to Palestine, then under British rule, and the last thing he wanted was to be recognized and deported to Poland. Still less could he voluntarily visit Poland and return to Palestine, which is (notes Czerniak in the same link just given) why he didn't play for the Palestinian team in the 1936 Warsaw Olympiad. So perhaps he changed his name to avoid detection by the authorities.

Still, changing one's name from 'Abram' to 'Moshe' while keeping one's surname is not much of a disguise. He may have changed his name merely to signify he was starting a new chapter in his life (as many did at the time, including chess players -- Foerder becoming Porat, etc., etc.). Why 'Moshe' then? Perhaps, like many European Jews, he may well have had a first and a middle name, i.e., Abram Moshe Blass or Moshe Abram Blass, and simply used only one of them in his youth in Poland and decided to switch to the other in Palestine.

Addition, 8/10/2014: It turns out, as Uri Blass, the grandson of Blass' brother Simcha Blass, notifies us, that Moshe Blass did not, in fact, change his name. His full name always was Moshe Aba (אבא) Blass. Uri Blass confirms, however, that 'Abram' Blass is in fact the same person as Moshe Blass.

This, on second thought, was the most reasonable interpretation from the start: disguise was not likely, as noted above, and most those who changed their name upon arrival in Palestine (or later, Israel) changed it from a foreign-sounding to a Hebrew name, not from one Hebrew name to another.

But solving this issue presents us with another one: why 'Abram' Blass, as many sources call him in the 1920s, when he played in Poland? Why not 'Moshe' or 'Aba' Blass? A simple mistake? A corruption of 'Aba' (a relatively rare name) to 'Abram' (a more common one) by non-Hebrew speaking reporters? Some other explanation?

It should be noted, for completeness' sake, that the biographical data in the obituary is quoted by Czerniak from Ha'aretz, 12.3.1971, before adding Blass' photograph, two games, etc. The obituary does not explicitly state if Czerniak also wrote the Ha'aretz obituary or merely agrees with it -- the former is likely, as it is written in Czerniak's style and he was Ha'aretz's chess editor at the time. But this is a minor issue.
פורסם על ידי Avital Pilpel ב- 11:23 AM No comments: 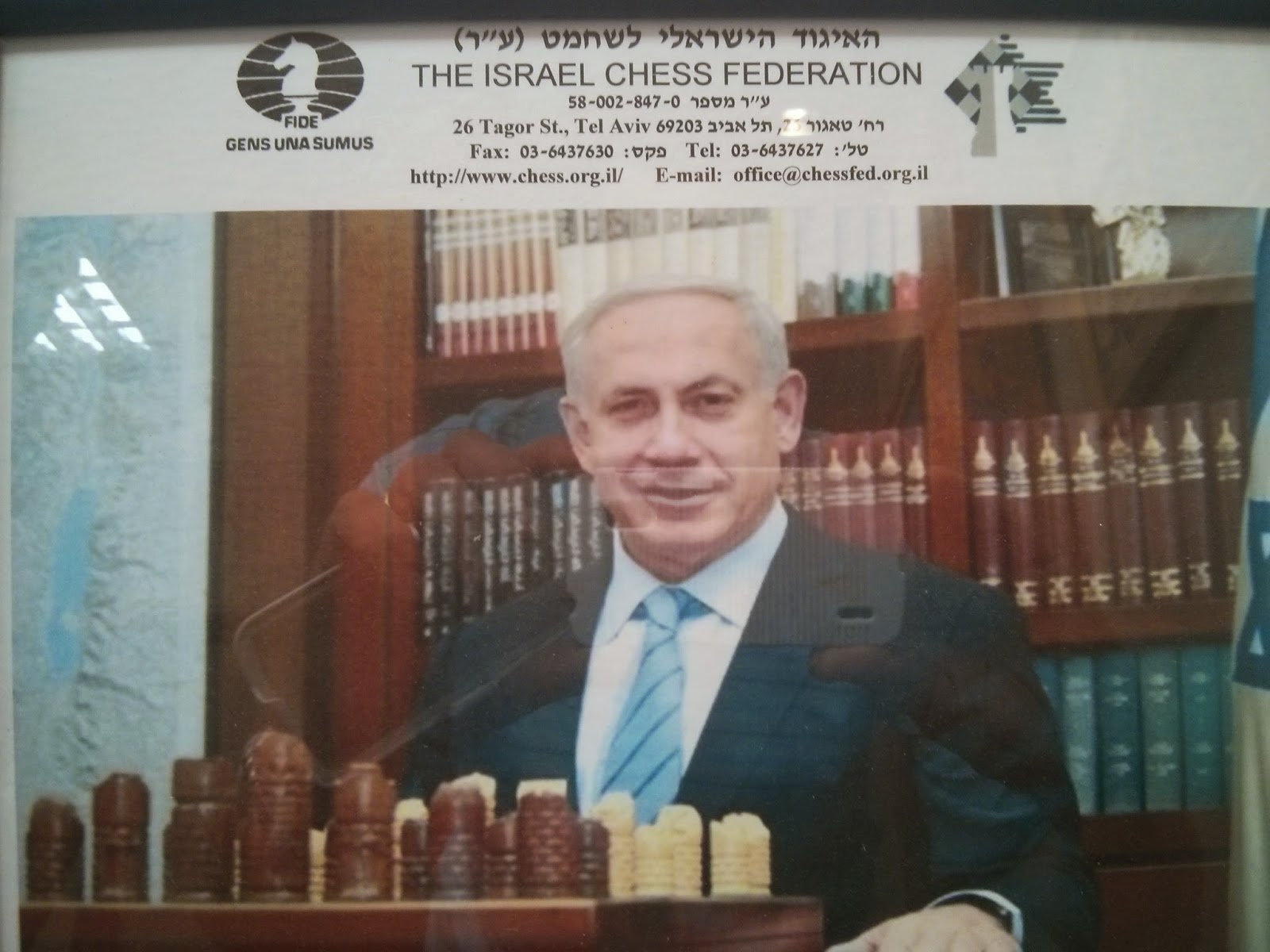 
It seems odd, but no widely-available database or web page seems to have Itzhak Aloni's exact date of death. Nor does Jeremy Gaige's Chess Personalia, still the most reliable and complete source -- which gives his exact date of birth and birth name (Izak Schaechter) -- has a death date except for "1985". (Note 13/9/2014: a reader notes that the correct Polish-language spelling of the name, which would be the language the birth certificate was written in, would be 'Izaak').

The date is given by Shlomo Kandelshine in the same book noted above, on p. 35. Aloni died on June 2nd, 1985, and was buried in Holon, Israel. Perhaps the lack of an exact date of death is due to the fact that the only sources giving it are in Hebrew.

Ironically, Shachmat, the Israeli Chess Federation's journal, had to announce his passing in the August 1985 issue -- right after celebrating his 80th birthday with a career retrospective in the previous two issues.

As said before, for consistency's sake I use Gaige's "Itzchak", but notes he was born "Izak". Kandelshine prefers "Izhak" in the English title of his book. All of these are simply variants of יצחק (Isaac). Think of Victor Korchnoi, Viktor Korchnoj, etc. for Ви́ктор Корчно́й.

Incidentally, Schaechter is a Yiddish name which means "kosher butcher". Aloni changed his name to 'Aloni' -- literally, '[like an] oak tree' -- when he was in a kibbutz in Palestine in 1943 (Kandelshine, p. 14). Changing one's foreign-sounding name to a Hebrew one was quite common among immigrants to Palestine and, later, Israel, until the 1960s. Porat, Oren, Aloni and many other chess players of those generations did so.
פורסם על ידי Avital Pilpel ב- 10:02 AM No comments: