A new(ish) chess stamp, to mark the European Individual Chess Championship of 2015 which took place in Jerusalem. The Israeli Philatelic Society also has the first-day cover: 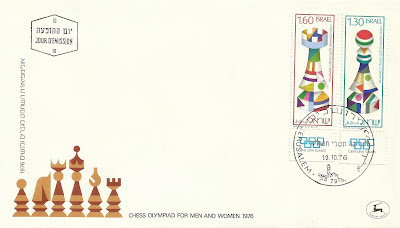 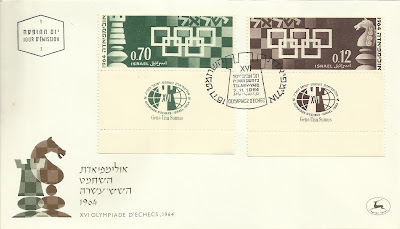 It seems, based both from philatelic sources and on the opinion of various chess players / fans I've talked to about the issue, that this is the first chess stamp Israel had issued since 1976 -- i.e., a gap of 39 years! One possible exception is a single stamp from 1990, showing a chess board on a computer screen. But it is dedicated not to chess or to any particular chess event, but to 'computer games'.

Edward Winter, in Chess Notes 9850 (link here, scroll down for the relevant C. N. Item) that Harvard Library has a collection of chess photos from Palestine / Israel, and gives a link to the relevant Harvard web site. The above is the simultaneous display of Rubinstein vs. Marmorosh, which we often mentioned in this blog. The Harvard web site has a much higher resolution picture.

To the best of my knowledge this is the only surviving picture of the display in question. The note (in Hebrew script) at the bottom right says Plastica / Tel Aviv. "Plastica" was, presumably, the name of the shop which developed the prints.

In addition, notes Winter, it has a link to numerous photographs of the 1964 Olympiad taken by the photographer Ya'akov Agor, (יעקב אגור -- his name, the Hebrew, or original, version of 'Jacob', is also sometimes spelled Yakov, Ya'acov, etc.). He was a photographer for various Israeli newspapers, especially of cultural figures, as this link for example notes. One good example is an informal photograph of Aloni (obviously in a private home, not in the tournament hall):

Or, obviously from the same roll of film, those who wish to know how Haifa looked at the time, on a "regular" street, not in or near the tournament hall:

But these are two of literally hundreds of such photos, arrange on Harvard's site in a few groups of ca. 150 photographs each. It has numerous photographs of chess personalities, better and lesser known.
פורסם על ידי Avital Pilpel ב- 8:56 AM 1 comment:

When one plays simultaneous displays as often as Moshe Czerniak did, it is of no surprised that sometimes one slips up. Davar notes (Jan. 12th, 1951, p. 23) that Czerniak had 'struggled in Hadera', giving a simultaneous display at that town the previous Saturday (i.e. Jan. 6th, 1951) that ended + 18 =1 -10 (!). Do the readers know of any worse results in simultaneous disaplys by leading masters?

Chess Notes 9830, by Edward Winter, has long quotes from the Pall Mall Gazette, of which Isidor Gunsberg was chess editor, concerning Wilhelm Steinitz's incarceration in an insane asylum in Moscow. Of particular interest to this blog is the following quote (see Winter's post for full details):

Steinitz's decision to write a book about Judaism in chess to combat antisemitism is remarkable. In fact, this report shows that Steinitz had, at least, began writing the book (hiring a typist to do so). Previous reports about it in the Gazette's chess column (see the link to Winter's C.N. 9830 above for details) call it a 'philosophical' book which Steinitz had contemplated writing for years, and that he 'raved' about it in Moscow. It seems -- unsurprisingly under the circumstances -- that the book was never finished.

It should be noted, in fairness, that while Steinitz's behavior was seen, from the reports quoted by Winter, as odd enough to require hospitalization, the belief in astral communication (with others distant, or with the dead) or attempting to employ it was, during the turn of the century, by no means an unusual idea. It was the heyday of numerous psychics and seers, and many people from W. B. Yeats to T. A. Edison to A. C. Doyle were either believers or at least considered trying to make such communications worth the effort. Perhaps they were naive or even foolish in this, but not insane.
פורסם על ידי Avital Pilpel ב- 10:26 AM No comments: