Never Take the Easy Way Out

From Moshe Czerniak's 1963 chess history book (see exact details in the post previous to this), p. 90:

Bronstein doesn't like to achieve his goals the easy way. I once blamed him for deliberately chosing the most difficult way during a game, in order to engage his creativity. The same quality is typical of him in life. When he learned to read English, he immediately started reading Shakespeare's work. 'It is harder, but also more interesting', he explained.


In Moshe Czerniak's Ha'sachamat (first volume, first issue, dated merely '1936'), we find it reported (p. 2) that 'one of the relics of the great players of the 19th century, Ya'akov [the Hebrew name translated as "Jacques" in French] Mieses, was in our country.' Not only that, but Mieses contributed an article about Jewish chess history to the same issue of the magazine (pp. 8-10).

According to Czerniak's later recollections, in Encyclopedia Tevel u'Meloah: Toldot Ha'Sachmat me'Reshito ve'Ad Yameynu [The Whole World Encyclopedia [Series]: the History of Chess from Its Beginning to the Present] (Tel Aviv: Mofet Press, 1963), pp. 50-51, he says, however, that the visit was in 1937. Czerniak adds there:


In 1937, when over 70, he arrived in our country. As a Jew, he wanted to know the Holy Land. Despite this being during the Arab revolt, he did not avoid going to the Wailing Wall and visiting the old city in Jerusalem. He gave a few simultaneous displays in the country. In one of them he played blindfolded against eight amateurs in Jerusalem. In another exhibition he stopped two of his game for a while so that his observant opponents could pray ma'ariv [the evening prayer].

Edited to add -- the visit was certainly in 1936. The particulars can be found in more posts about 'Mieses' in this blog. There are slight discrepancies between the totals of players in Mieses', Marmorosh's, and Czerniak's recollections. With all probablity Marmorosh's contemporary and detailed accounts are the most accurate.
פורסם על ידי Avital Pilpel ב- 1:35 PM No comments:

Abdullah of Jordan and Chess 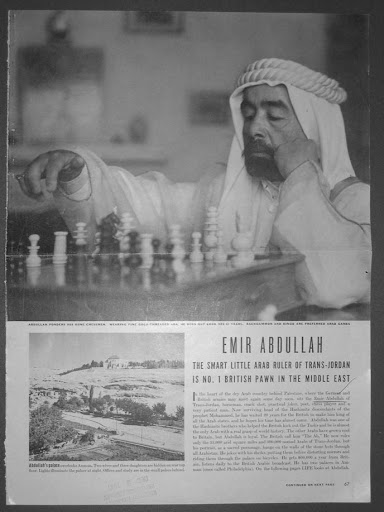 As previously noted on this blog, king Abdullah I of Jordan (1882-1951) was a keen chess player, having invited Moshe "Mendel" Marmorosh to play with him in Amman in the 1930s (see also Edward Winter's chess notes #4211.)

Above is another photo of him from 1941 -- at the time, he was the emir (governor) under the British mandate. This photo appears on "Mr. Chess"'s very interesting picasa album. (Hat tip: Andrew McMillan).
פורסם על ידי Avital Pilpel ב- 1:25 PM No comments:

From www.xkcd.com , the web-based comic strip.

Well worth visiting for other reasons than chess.