What is it about the new year that makes people make all these resolutions – which they never keep anyway? Or give presents to each other? Whatever it is, let us make a couple of them:

1). On the “resolution” side, I resolve to finally finish my planned work on the history of chess in Israel and Palestine, of which this blog is only part. Oh, and to make some improvements to my OTB play…

2). On the “presents” side, I can say that there is reason to believe that this blog will become significantly more popular, especially among certain populations who should be interested in the history of chess in Israel or Palestine, but, until now, have probably been unaware of its existence.

I am not at liberty to disclose any more details right now, but all will be made clear, I hope, within a few weeks. 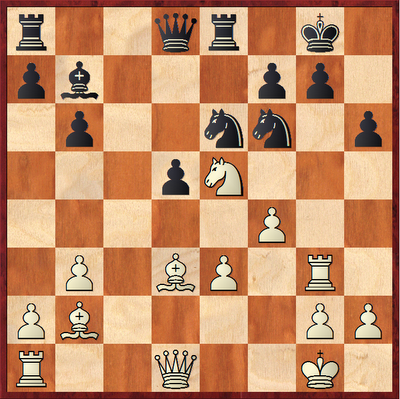 Black's 19th and 20th move are typical "Czerniak moves": possibly objectively bad, even losing, but Czerniak as usual does everything to gain counterplay and activity. Didn't work this time.
פורסם על ידי Avital Pilpel ב- 8:34 AM No comments:

Death at the Board

There are many stories of chess players dying at  the board, but not too many confirmed instances. Raphael (who asked his last name be withheld) had emailed me that his grandfather, the Jewish player Benno Puder, had died playing chess. From his email (my translation):

My grandfather, Benno Puder, was a chess enthusiast and player. My mother believes he was the senior champion of Switzerland, but I have found no formal proof. Here is a link to a tournament in his memory [a junior blitz tournament -- A. P.] in Basel.

In Passover 1995 family and friends, as usual, rented an hotel in the French Alps for the holiday. That year it was in Aix Le Bains. One day my grandfather played with a grandchild -- not actually a grandchild, but the grandson of a couple he saved during the [second world] war and smuggled from France to Switzerland, and since then the family histories are intertwined. After he hasn't moved for a while, Samuel said, "grandpa -- your turn!", and then noticed his head is slumped on the board..."

I emailed the Swiss Chess Federation to see if they know anything about Puder's senior championship, and will also check Jeremy Gaige's indispensable sources when I get home. But if any reader knows anything I would be grateful. I add that the in passim note in Raphael's email about how Puder saved people from near-certain death, risking his own life, during WWII tells us more about the man than his chess career does!
פורסם על ידי Avital Pilpel ב- 9:57 PM No comments:

Moshe Roytman notifies me that I was wrong to say the Palestinian chess establishment ignored Karff's participation in Stockholm 1937. On 20.8.1937 Marmorosh, in his Davar chess column, reports she had won two games (one over the Austrian women's champion, Salome Reischer); and on 27.8.1937 that she finished the tournament in fifth place (sic -- actually joint 6-7th; Marmorosh forgot Milda Lauberte of Latvia who was joint 3rd).

In the the next column, on 5.9.1937,  Marmorosh once again returns to the tournament -- this time presents a brilliancy by Vera Menchik in her victory over Sonja Graf. Menchik sacrificed a rook and a queen to win instantly. in a game that is, for some reason, not found in the "standard" online or computer databases. Correction: a chess friend from Munich noted the game was played in Semmering (and not in the Stockholm tournament, as I wrote). This is my, not Marmorosh's, mistake: Marmorosh himself notes explicitly that the game was played in Semmeing, which I have overlooked. What's more Indeed, the game is indeed found in databases, for example in www.chessgames.com. That said, I still think Edward Winter's quote below is justified...

Yet more reason to look at, as Edward Winter says, the "treasures found in old magazines". Can you find the win?

The tournament is notable for two other (at least) points: first, Vera Menchik's clean score (+14 =0 -0) which, despite the relatively weak opposition, is quite an achievement in a serious tournament. Second, Menchik's sister Olga Menchik also took part, doing quite respectfully -- 6.5 / 14.


...no, not Boris Gelfand. Rather, Mona Ray Karff, known as the queen of American chess in the 1940s and 50s (winning the US women's chess championship seven times, inter alia), and, perhaps even more, as Edward Lasker's long-time partner. What is the relationship to chess in Israel and Palestine? Born in Basserabia, she and her family fled to Palestine after the revolution. In 1937, she took a very respectable joint 6th place in the women's world championship which took place in Stockholm, representing Palestine. From there she moved, apparently, directly to the USA. The next time a Palestinian, or Israeli, player of either sex took part in the world chess championship, it was in the 21st century.

It is surprising that she was, to the best of my knowledge, not mentioned in either contemporary or in later accounts about Israeli or Palestinian chess history she was -- see post from June 7th, 2014 on this blog -- despite the fact that at the time any sort of achievement in the international scene of someone representing Palestine was usually shouted from the rooftops (such as, for instance, the participation of the Palestinian team in the 1935 Olympics). Perhaps she had no connections with the Israeli/Palestinian chess "scene", seeing Palestine as a mere stop on the road to the USA.
פורסם על ידי Avital Pilpel ב- 1:20 PM No comments:


Ms. Jacqueline Piatigorsky, of the Rothschild family, had turned 100 on Nov. 6th this year. She is best known to most chess players as the co-sponsor of the Piatigorsky cup tournaments and the Fischer - Reshevsky aborted match. It is easy to think she and her husband, Gregor Piatigorsky, the famous cellist (both Jews, of course), were just "dabblers" -- rich patrons who threw money at strong players for their own amusement.

Nothing could be further from the truth. Ms. Piatigorsky is not only a life-long chess enthusiast, but she was one of the strongest women players  in the USA (highest-rated female player in California and 2nd-highest in the USA in the 1960s, according to Wikipedia) and represented the USA in the 1957 Women's Chess Olympiad, scoring a very respectable 7.5/11 and winning a bronze medal on the 2nd board.

Here, from www.chess.com, is a cute game she won (with quite a lot of help from her opponent, Willa Owens, women chess champion of Ohio), in the 1951 USA women's chess championship in New York (annotations by Owens, who explains how "the roof caved in":)

Chess in the Warsaw Ghetto

O thou whose cynic sneers express,
The censure of our favorite chess,
Know that its skill is Science' self,
Its play distraction from distress...

If there was ever a place where chess was needed to "distract from distress", it surely was the Warsaw ghetto. The Polish-Swedish player Marek Szapiro (1917-2002) was one of those who survived the ghetto. Yakov Zusmanovich, who specializes in collecting chess biographies, kindly informs me of Szapiro's book, My Chess Life (Penelopa publishing, Poland, 2005, ed.: Tomasz Lissowski). The book contains, among other things, over 100 games -- including some played in the ghetto.

Here is one such game -- from p. 59 of the book, with the author's punctuations and diagrams but without the rather deep annotations that are found in the book. 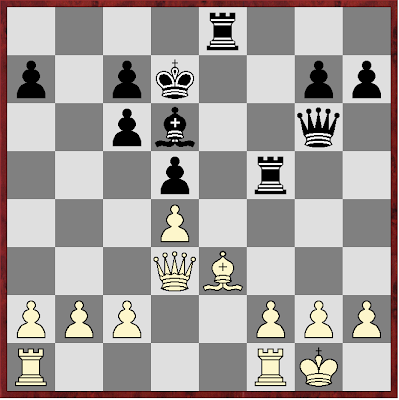 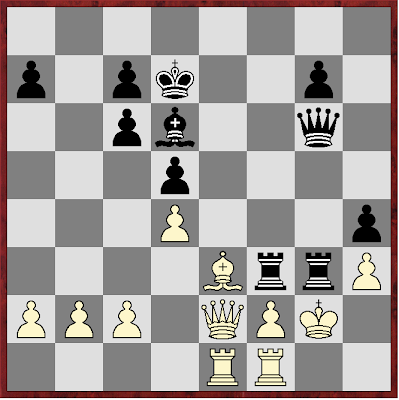