In the following game (Rafee Persitz [Israel] - Julio Salas Romo, [Chile], Leipzig Olympiad, 1960, 2nd final), Rafee Persitz, who had recently passed away, showed his natural talent for endgames. This version of the game (slightly different from the game given in Chessbase 9's databases, incidentally) is given in Moshe Czerniak's book, Israel be'Olympiadot ha'Sachmat ['Israel in the Chess Olympiads'] (Tel Aviv: Rotem Press, 1979), p. 68. The annotations are Czerniak's.

On the previous page of that book Czerniak notes that it's a pity Persitz doesn't spend more time on chess -- he could have become 'a strong international master'. Like others, Czerniak was very impressed, not only with Persitz's play, but with the fact that it was a natural talent. For Persitz, chess was always a hobby, something he did in his spare time. To play this well when spending so little on the game is surely a sign of genius. 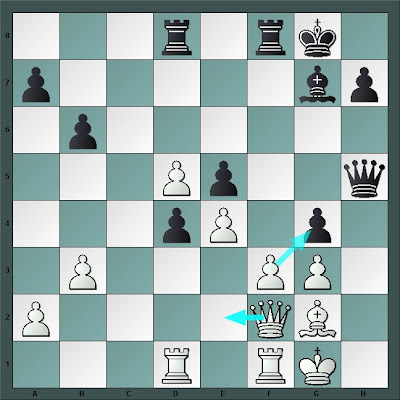 White is in a difficult position. He has no sufficient defense against Rd6-h6 or Bh6-e3. 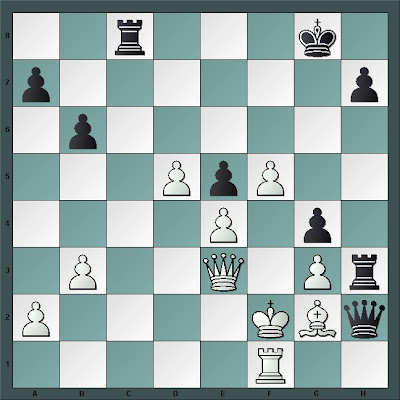 Both players are very short of time. White, having no sufficient defense to Black's threats (38. Qd3 Rxg3+! or 38. Qg5+ Kf7) decides to pose a problem to his opponent.

Israel Yosef Keniazer was one of the stronger players in Palestine and Israel, strong enough to play on the Israeli (or Palestinian) team in the Amsterdam Olympiad (1954) and in other top events, such as the 1952 Israel Masters' tourament.

His poor showing in that tournament (2.5/9) was the reason he was not chosen for the 1952 Olympiad team. Zvi Bar-Shira had told me that that Keniazer claimed he was misled into thinking it was a training tournament (tacharut imunim) and not a masters' tournament (i.e., informal qualifying event -- tacharut amanim). If he had known, he would not have played experimental opening lines!

(How seriously to take this story, I do not know. Bar-Shira is a witness, but another interviewee who knew Keniazer well and wishes to remain anonymous told me that Keniazer was a very gentle man -- this story doesn't seem to fit with his character.)

In any case, Keniazer's diary -- quoted (pp. 94-96) in the same book -- gives a fascinating picture about what it was like, to be a Jew from Israel in Europe so soon after the end of the second world war -- and the beginning of the cold war. After much praise of the event, its organizers, and the general positive attitude of the press and the populace, he adds:

'There were unpleasant moments. We didn't shake the Germans' hands, despite the fact that they kept wanting to make friends. There was one player, an assimilated Jew, who explicitly asked us not to get close to him, lest his Jewishness -- which everybody actually knew about -- be emphasized; a tragi-comic situation. I had a conversation with a Dutch lady who could did not believe I have a daughter and granddaughters, because she was under the impression "Israel is one large kibbutz [agricultural commune--A.P.] where children are kept separated from their parents. I told her that in Holland, too, not everybody walks in wooden shoes, nor do windmills take up all the space. We felt the Russian Jews are dying to speak with us, but self-preservation stopped them.'
פורסם על ידי Avital Pilpel ב- 1:50 PM No comments: 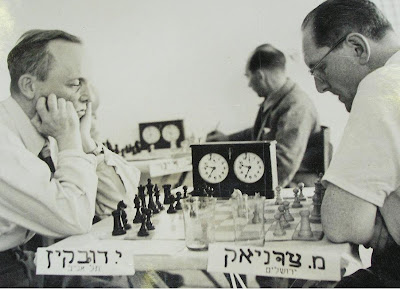 Shaul Hon's opening manual (mentioned in the previous post), while not as good in analysis as Raafi Persitz's work, certainly has its strengths. Its most important role, for the historian, is saving many obscure -- but interesting -- games played in Israel (or mandatory Palestine), which do not appear in most databases or other sources.

One example is the following beautiful game, which (says Hon) Irving Chernev had said has White "playing like Morphy". 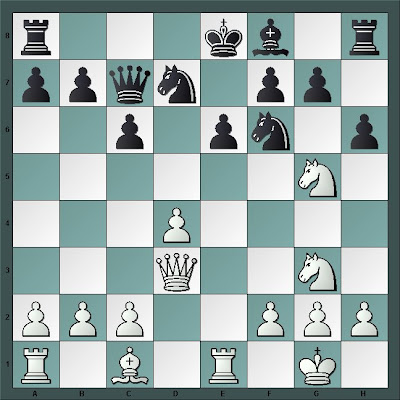 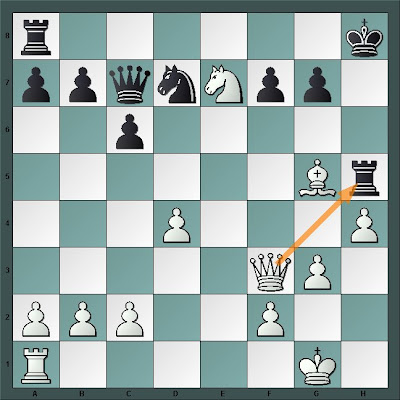 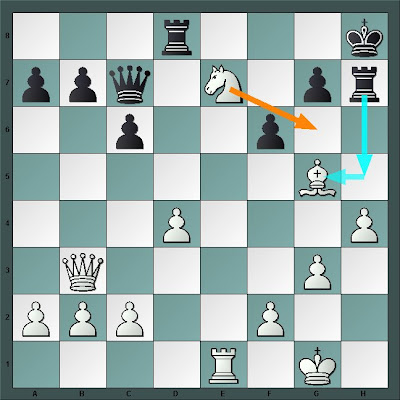 This games reminds us of Cherniak's saying: 'Dubkin doesn't know the source of his own strength'. Chernev the famous American analyst, was correct when he said about this game: 'Dubkin plays in Morphy's style.'
פורסם על ידי Avital Pilpel ב- 1:15 PM No comments:

Rafee Persitz, who died last Thursday, was perhaps the greatest natural chess talent in Israel. As a 20-year-old, he made an excellent 7.5/9 score in the 1954 students' Olympaid (playing second board) and made a very respectable show in the famous Hastings tournament in the mid-1950s. He was also Israel's first blitz champion. From 1958 to 1962, as the obituary (by Israel Gelfer, in Hebrew) on the Israeli Chess Association's web site says, he was probably the strongest Israeli player -- defeating, to name a few, Czerniak, Porat, Aloni, and others, and representing Israel in the Leipzig (1960) Olympiad, making a very respectable 60% score, the second-best on the team. As a student in Oxford, he defeated C. H. O'D. Alexander, the former British champion, as the chessbase obituary (with a photo) notes.

What's more, he did all this when an amateur who only spent a little time on chess. As Moshe Czerniak noted in his book Israel be'Olympiadot ha'Shachmat [Israel in the Chess Olympiads] (Tel Aviv: Rotem Press, 1979), p. 67: 'It's a pity Rafee Persitz doesn't devote more time to chess. He should have been an excellent International Master by now.' Persitz probably never considered making chess a serious career -- he studied economics and became a well-known financial analyst. Perhaps his fights with the Israeli Chess Association's administration had something to do with it. As is well known in Israeli chess circles, he once sent a letter to the ICA which began, "Dear honorable gangsters, ...".

His over-the-board achievements notwithstanding, he would probably be remembered not only for his natural talent, but for his for his excellent written analysis. As the chessbase obituary (with a photo) notes, he contributed for a long time to the British Chess Magazine's 'The Student Corner'. Yochanan Afek adds in this obituary that Persitz wrote 'a couple of Hebrew chess books'. That is slightly inaccurate -- there were three, in fact:

- both with co-author E. A. Mandelbaum; and

All these books show deep analysis -- especially opening theory -- that is not only objectively very good, but, more importantly, far above what was then common in the Hebrew chess literature. For example, the last book typically has three or four pages of analysis concerning the first ten moves. Compare to a typical Hebrew-language book from that period -- Shaul Hon's Petichot be'Shachmat [Chess Openings] (Tel Aviv: Magen Press, 1957, 1958, 1964). Hon's book -- despite being an opening manual and popular enough to be reprinted twice -- usually only gives a page, or half a page, to the same number of moves.