Capablanca's View of his Draw with Czerniak

We already saw that Capablanca complained to Czerniak in 1939 that his powers are slipping due to his age. Czerniak adds in the same source given in the link (Toldot Ha'Sachmat -- quoted in Ad Ha'Ragli Ha'Acharon, by Afek and Volman, p. 33) that the draw 'annoyed [Capablanca] not a little: 'I can see the headlines: Capablanca is getting old!' he told me."

This certainly agrees with what Capablanca wrote here -- in an article for Critica, Aug. 25th, 1939 -- about this game. Obviously, he felt that he needed to justify his disappointing result in that game. As the olympiad started the day before, this article was published before he got his "revenge" -- a famous victory over Czerniak in the finals, which was widely published (it is given in Sanchez's biography here as 'one of his memorable productions'). Czerniak, in Toldot Ha'Shachmat, adds that Capablanca's combination 'fell on him like a blow on the head'.


A frequent correspondent reminded us that Yuri Averbakh had just celebrated his 95th birthday, making him the oldest living Grandmaster. He also pointed out this interesting interview with Averbakh on YouTube (in Russian). Averbakh's father was Jewish, his mother Russian Orthodox.


Averbakh noted that he became a Russian officially since, as a son of a mixed marriage, he could choose his own nationality for official purposes at age 16. He first signed himself up as Jewish, but his mother forced him to go back and change his nationality to Russian: 'What have you done?'

Our correspondent adds also that Taimanov and Korchnoi also told similar stories about their own nationality. Finally, he notes that a report on Averbakh's birthday (link in Russian) includes, inter alia, the reading of a 'Happy Birthday' message to Averbakh from his 111 year old aunt!

From our collection, we add his dedication, in one of his endgame books, to Almog Burstein (link in Hebrew), for their 'joint work in Buenos Aires' - that is, the 1978 olympiad there. This is an interesting example of chess trumping politics, since Averbakh was the chairman of the USSR chess federation during 1973-1978 -- and, in 1976, the USSR boycotted the 1976 Haifa olympiad. In that olympiad, incidentally, Burstein was instrumental in using a computer (the Technion's) for the pairing, for the first time in Olympiad history. 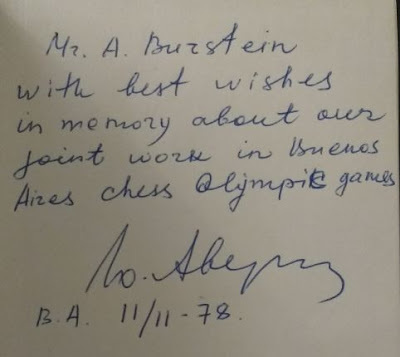