In this position, Marmorosh (white, to move) has a nice attack. But how does he win? The game is from a simultaneous display given in Tel Aviv in 1927, published in La'Merchav's chess column on 20/7/1956 (editor: Eliyahu Fasher, with his annotations below). 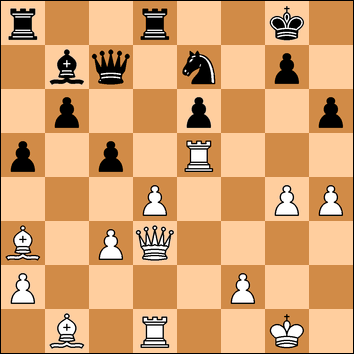 Who was Rev. Cohn of Chicago?


In The Occident, on Nov. 15th, 1860, (p. 6), the Jewish-American newspaper, appears a note that "Rev. Mr. Cohn" was chosen as a Rabbi for the Chicago congregation. This is relevant to Jewish chess since the article continues to note that he is a celebrated chess player who "vanquished the celebrated Paulsen."

The problem is that I can find no game which Paulsen lost to Cohn, nor a tournament (using Jeremy Gaige's Chess Tournament Crosstables) finds any player named "Cohn" who played in America in that time period in strong tournaments.

Is this mere puffing by the newspaper -- e.g., perhaps Cohn once won a game in a simultaneous display or the like -- or was there really a strong player named Cohn from 1860s Chicago? I shall re-check using Gaige's Chess Personalia, but I doubt I will find anything. Does any reader know more?

Edited to add: I checked, and, as expected, found no Cohn or Cohen who could fit the bill in Chess Personalia.

Chess History and the Hebrew Language

It is now well known, and accepted by almost all authorities, that chess originated in India ca. 600 AD. This was not the case in the 19th century, when the invention of chess was attributed to numerous other ancients, legendary or real, such as Achilles, King Solomon, etc.

One of the first mentions of chess in a Jewish newspaper was in The Occident, the American Jewish newspaper, on Oct. 18th, 1860, pp. 4-5, reprinting an article from the Chess Player's Chronicle, by the Jewish player, Aaron Alexandre, who was a strong player (winning a match against Staunton in 1838) and chess historian. The letter claims that chess was invented, perhaps, by Moses, and that 2 Samuel ii. 14 is, based on the original Hebrew, was really the settlement of a political dispute by a game of chess, much like the old Indian legend about chess being invented as a replacement for actual war.

Alexandre's interpretation is ingenious, linguistically speaking, but quite forced, and in any case not accepted by most people. But it is probably the first time in the modern era a Jewish player tried to argue for a specific origin of the game -- naturally attributing it to the Jews.

For some reason I cannot link to the article itself, it's possible however to search the newspaper in the link with the details provided.
פורסם על ידי Avital Pilpel ב- 12:41 AM 1 comment:

Quick Addition about the 1929 "Mystery Tournament" & Other Inter-City Tournaments in the 1920s.

Note: all links here are in Hebrew, except the first.

We have seen before that there was an unofficial Championship of Palestine in 1929. Tarbut Encyclopedia (Masada Press, 1964), in "Jews in Chess", adds that the the winner was Victor Winz, one of the strongest players in Palestine at the time.

This was not, it should be noted, the first tournament where players from various cities had joined. Already in 1922 there was a Tel Aviv - Jerusalem match; here is a report on the second (1923) tournament, which mentions in particular Pappo, the Tel Aviv player, as being successful (in Hebrew).

As people did not "move about" too much at the time, it is likely that the clubs simply didn't care where a strong player lived -- as long as he joined and played. So the whole matter of which tournament was the first "general" or "nation-wide" tournament in Palestine depends more on definitions than on the facts. Was it in 1922, 1924, 1928 or 1929?
פורסם על ידי Avital Pilpel ב- 1:42 PM No comments: