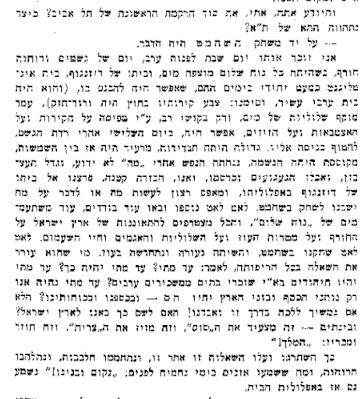 A frequent correspondent notifies us that it was over a game of chess that Tel Aviv was founded. In Ha'olam, April 19th, 1929, p. 8, a witness, Kadish Yehuda Silman, describes the scene which occurred 30 years previously, ca. 1900.
In Meir Dizengoff's house, in a gloomy, rainy day, the house of "almost the only intellectual [in Palestine] in those days," a small group of were sitting and complaining about the bad situation of the Jews in Palestine when playing chess. They were wondering what to do to improve the Jews' situation - and in particular, how Jews can own their own homes instead of renting from Arabs -  as "one was moving the knight, the other the rook, and a third keeps saying 'check!'."
Suddenly, they all decided, as sprits rose, "what ears once heard in the time of Nehamaih: let us rise up and build!". And thus, the decision to fund Tel Aviv was made.
פורסם על ידי Avital Pilpel ב- 11:18 PM No comments: 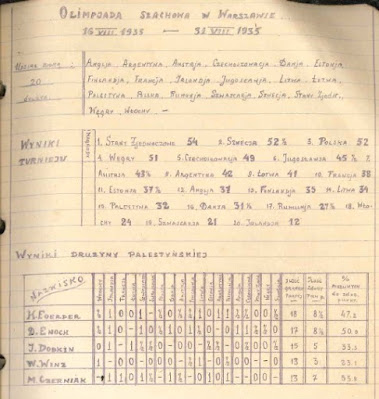 Mr. Tomer Kaufman had brought to our attention Moshe Czerniak's notebook from the 1930s, which he owns. With his permission, we present here an example: Czerniak's summary of the 1935 Olympiad. The games and commentary are in Polish, and he has in the notebook games from a variety of events in the 1930s, mostly Palestinian events but also, as noted, the Olympiad.