The first chess club in Palestine was established in Jerusalem in 1918 by Col. Ronald Storrs, the British military governor of Jerusalem. It was called the "International Chess Club". This was not false advertisement, but an expression of the hope that it would be a chess club that would unite the different nations -- local Arabs and Jews, and European Christians of various nations who were then stationed in the city -- and help promote peace and understanding. Unfortunately the club closed within a year of its founding, due to the increasing tensions between the Arabs and Jews.

But hope springs eternal, and today Jerusalem's most active chess club -- Jeruchess (link partially in Hebrew and partially in English) -- has, as its motto, its Hebrew name (ירו-שחמט, Yeru-Sachmat) with the word שחמט (chess) incorporating the Muslim crescent, Jewish star of David, and Christian cross into the typography. What's more, the club is located in the Tarbut Ha-Amim center -- literally, the "international civilizations" center -- whose goal is (according to their English language web page and the Hebrew wikipedia page about them) to serve as a center for the meeting of the different cultures in Jerusalem and to promote pluralism.

Will it work this time? Who knows?

OK, OK, I'm cheating -- that's actually a picture of Yehudi Menuhin. But am I the only one who sees a resemblance?

By the way -- this shows up when one searches for "Reuben Fine" in google images. Not that I'm complaining, but -- seriously -- it makes one think about how accurate learning about the world through google really is.
פורסם על ידי Avital Pilpel ב- 2:29 PM No comments:

Two "Firsts" and Some Musings 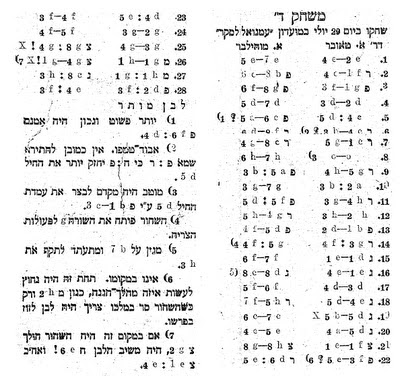 This column was the first chess column published in a daily newspaper (as opposed to the previous column in the weekly The Palestine News which started in 1918, as seen elsewhere in this blog). On 13.8.22, it featured the first locally-played game ever to be published (to my knowledge) in Palestine or Israel, between Mohilever himself (black) and Dr. A. Tauber. (0-1). Above is the column as it appeared in the paper (click for a larger version); below is the game, with annotations by Mohilever and my colleague and strong player Shahar Gindi (in Italics). Below, a picture of Mohilever (standing top left) and others in the Lasker club from the same period (1924) (source: 64 Mishbatzot, May-June 1957, p. 233). 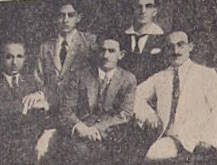 1). Bizzarely, while the date -- 13.8.1922 -- was a Sunday (a regular working day for a Herbew-language newspaper in Palestine or Israel), the column was actually published the previous Friday, 11.8.1922, in the enlarged (six pages!) weekend edition. It was only dated 13.8. Yes, Doar Ha'yom was a daily newspaper which was "pre-dated" one issue: that is, one bought on Monday a paper with Tuesday's date, and on Friday a paper with the following Sunday's date (no paper was published on Saturday). Ever heard the contemptous expression, 'this newspaper can't even get the date right'? In Doar Ha'yom's case, it was literally true.

2). Naturally Gindi's analysis (as checked by a computer) is much more accurate, but as he told me, it was certainly a publishable game even with the oversights in the game itself or in the analysis.

3). I must add that to me, as a weak player, Mohilever's analysis made more sense: it looked like a case of "crime and punishment", with White being punished for losing tempos with his queen for no good reason. Gindi (as well as the computer) saw deeper, and disabused me of this notion. Once more we see that actual variations and moves are far more important than general strategic considerations in most situation: in particular, white could have won by playing e6 at the right moment, despite all his "lost tempos".

As Tartakower allegedly said, 'strategy, schamttegy -- checkmate ends the game'; or, as Tarrasch actually did say (to Napier -- as usual, Edward Winter has the goods, see quote #72 in the link), '[I]t is never enough to be a connoisseur of chess; one must also play well'. All this is not said to tell amateurs not to study strategy, but to not think it is more important on their level than it actually is.

What knowing chess strategy does help the amateur a lot with is in organising his thoughts: trying to have some idea of what a "plan" is, an idea of "what should I do?" in a position instead of just checking random moves, etc. This is necessary if the amateur is ever to improve. But the improvement itself has a lot more to do with knowing tactics, basic endings and openings, etc., well, not with knowing strategy more deeply. Strategy can guide tactical thought, not replace it. This is what is meant by the old saying (not actually Capablanca's, as C.N. 4209 in this link to Winter's Chess Notes notes) that chess books should be used to "assist" and not "confer" sight.

4). We see the influence of the European, as opposed to the British, influence when translating chess terms into Hebrew. The queen is called a gvira [גבירה] -- "dame" (as in French or German); and White's resignation is translated as Lavan mevater [לבן מותר] -- "White gives up", literally from the German term from resignation, gibt auf. Today in Hebrew the terms used are from the English: malka [מלכה] -- queen, and Lavan nichna [לבן נכנע] -- "White resigns" (lit. "surrenders"). There is, by the way, a web page with chess terms in 73 languages -- although I cannot vouch for its accuracy, it is at least correct in the languages I know...

Better and simpler was Nxd5.

Losing a tempo. There is no need to fear NxB since dxN will strengthen the d5 pawn.

Fortifying the d5 pawn with Nc3 was better.

White can maintain the material advantage by playing Bxf6 or Ba4+.

Opening the g-file for the rook.

Nice maneuver to bring the queen to the center.

Now White gets the edge again [Gindi].
Protects b7 and prepares and attack on h3 [Mohilever].

Inappropriate in this situation. A defensive move was called for, like Kh2; only after black moves the king should white have moved the knight. 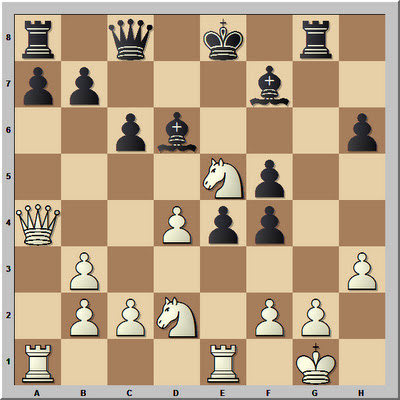 To those who want to get an idea just how small the chess world was in the early history of chess in Israel or Palestine, the following notice from a 1922 newspaper will give an idea.

It notes with satisfaction under the headline 'Chess Library in the Jewish National Library [Beit Ha'Spharim Ha'Leumi]' that the chess publishing house [Schachverlang] in Berlin headed by H. B. Cohen had donated a 'complete library' of 47 volumes' about chess to it.
פורסם על ידי Avital Pilpel ב- 2:02 PM No comments: