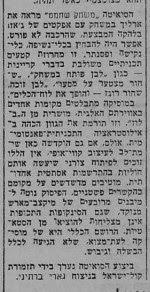 A frequent correspondent notes that in 1960, the Israeli composer Abel Ehrlich composed a suite 'A Game of Chess', which was performed on Kol Israel radio. The above criticism (La'merchav, Oct. 28th, 1960, p. 6) notes the suite's parts are named 'White opens the game,' 'Black regrets his move,' 'White wins, Black upturns the board in anger' and so on. The work's score is available for purchase at the Israeli Music Institute, which has complete details about it. 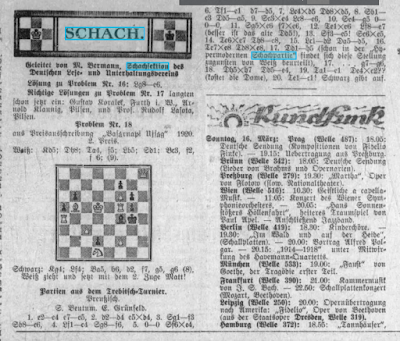 We noted before that Siegmund Beutum was a strong player before he came to Palestine. Here is one example: his defeat of no other than Ernst Gruenfeld in 20 moves. The game does not seem to appear in Chessbase's database. We thank Herbert Halsegger for providing us with the source, the Pilsner Tagblatt, 16 March 1930, p. 5.

It is comforting to a "patzer" like myself to note that Black, in a worse but not lost position, loses the game to a one-move blunder - and that he was one of the best players of the era! 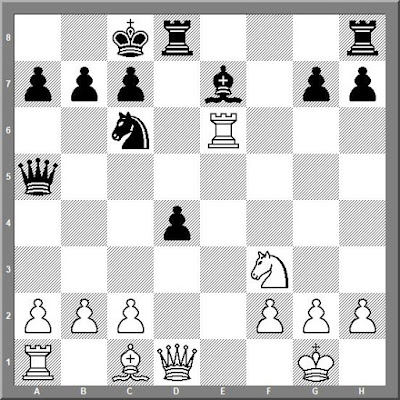 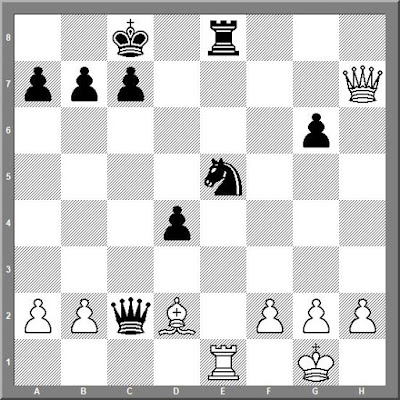 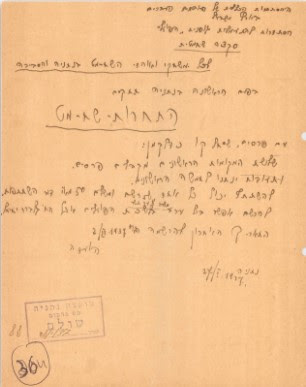 The state of chess funding in Palestine can be gleamed from this advertisement, brought to our attention by a frequent correspondent. It is by the 'Chess section, Ha'poel physical exercise union, the Histadrut' about a chess tournament to take place in 1937 in Netanya. The official advertisement (with the stamp, 'advertising tax paid') was actually hand written in pen.
פורסם על ידי Avital Pilpel ב- 8:26 AM No comments: 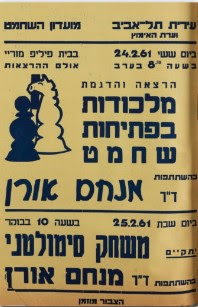 The above street poster from 1961 was brought to our attention by a frequent correspondent. It advertises both a lesson about opening traps and a simultaneous display (the next day) in the lecture hall in the Philip Murray cultural center in Tel Aviv. Both were given by Dr. Menachem Oren, Israel's first chess champion.

The above quote has been brought to our attention by Herbert Halsegger, an Austrian chess historian. It concerns Berend Lehmann, the most important "court Jew" of his time (1661-1730), being an advisor to the courts of Prussia, Hanover, and Saxony. The memory is of his great-great-grandson, Emil Lehmann. Halsegger's translation (adding the last words of the paragraph, missing in this photo) is:

He earned the favour of KING FRIEDRICH I. through a chessgame! Coming to an audience, the king played chess with PRESIDENT VON RUCK, said to him, he should wait, because his position is bad and he will loose. Berend Lehmann (Bermann) a fine chessplayer had an other opinion and played instead of the king and won!!

Such dramatic stories are often not 100% accurate, being in this case a story from nearly 200 years after the fact. But since Berend Lehmann was a well known archivist, among other things, and his descendant may well have had detailed family information, I am tempted to consider the story genuine.

We add that Mr. Halsegger is engaged in research about, in particular, Jewish players of Ha'koach in Graz. Mr. Halsegger can be reached at: h.halsegger@aon.at . 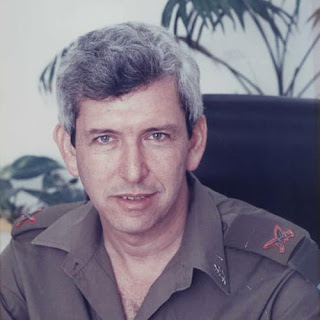 The above photo is of Brig. Gen. Ehud Gross (from Yochanan Afek's facebook post about him). Gross was not only a general, but in particular the IDF's Chief Education Officer, responsible for the Education and Youth Corps. He was, as Afek and others noted, both a chess master (in the Israeli Chess Federation) and an international judge. He was surely one of the strongest chess players among senior officers. 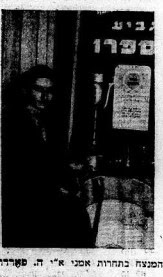 In this photograph, from Ha'aretz 21/4/1939 p. 5, we see the winner of the Palestine masters' championship, Yosef Porat (then Heinz Foerder). He is holding the 'Maspero Cup,' a 'valuable silver cup donated by the Maspero corporation,' as noted in Ha'aretz on 17/3/1939, p. 6. Does anybody have a better-quality photograph?
Edited to add: a frequent contributor to this blog notes that the corporation, the Maspero Freres Ltd. cigarette corporation, also patronized other sports events, such as an archery, at that time. More on the corporation here (in Hebrew).
פורסם על ידי Avital Pilpel ב- 6:20 AM No comments: 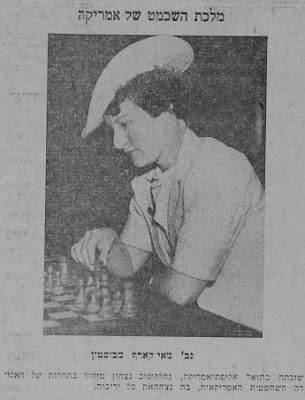 Above, from Ha'aretz, September 18th, 1938, p. 4, is a nice photo of Mona May Karff, identified as the 'Queen of American Chess' (with the word 'chess' misspelled...) after her victory with a clean score in the 1938 American women's championship.

Two for the Price of One 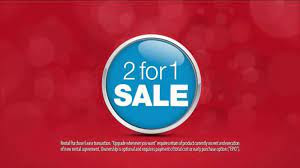 Here is an odd occurrence. It is often the case that a chess column does not appear in a certain week or day in a paper. But on November 12th, 1937, in Ha'aretz, two different issues of Marmorosh's chess column appeared... both on two different "page 12". A partial explanation is that one of them appeared in the regular (morning) edition and another in the supplemental (evening) edition. 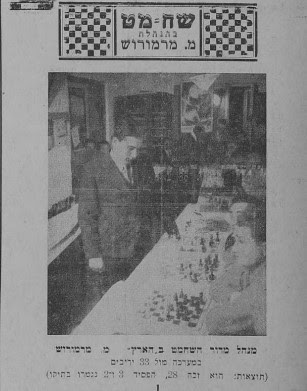 On chess's increasing popularity we can learn from the following advertisement in Ha'yarden (August 11th, 1939, p. 9). It notes that the Ya'akov coffee house and restaurant in Tel Aviv has a "first rate kitchen," a "cool and breezy garden" (quite important in Tel Aviv in the summer before air conditioning!), and is a "center for chess players."
פורסם על ידי Avital Pilpel ב- 2:38 AM No comments: 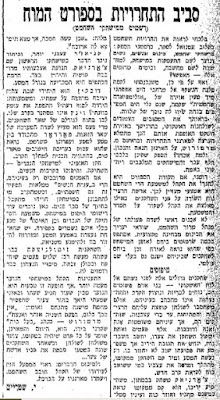 Above is a long article from Davar, April 9th, 1939, p. 5, by Y. Straight (ph. spelling). It looks at the various players in the Lasker club in Tel Aviv during the triple tournament held there: the men's, women's, and youth championship of Palestine. The author praises Marmorosh's organization of the tournament (in the "Palga" coffee house next to the beach), and gives pen portraits of both many of the men and the women playing - Dobkin, Czerniak, Kniazer, Porat (then Foerder), and the woman player Zitolenitzka (ph. spelling).